September 23, 2021, 2:10 PM · Welcome to "For the Record," Violinist.com's weekly roundup of new releases of recordings by violinists, violists, cellists and other classical musicians. We hope it helps you keep track of your favorite artists, as well as find some new ones to add to your listening! 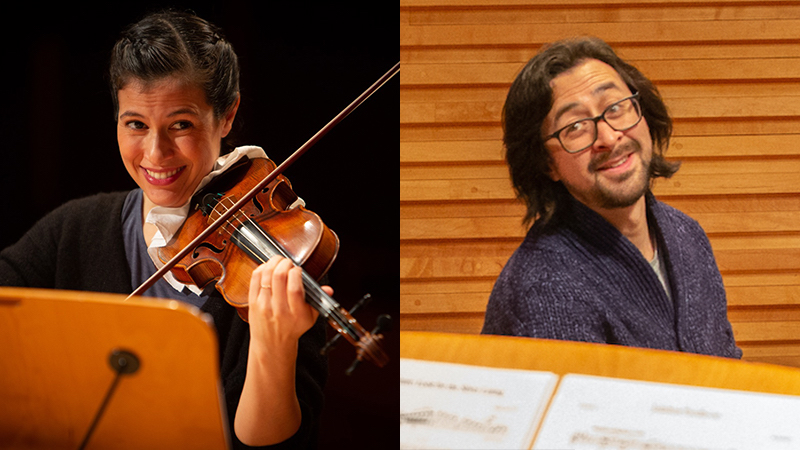 In March 2020, violinist Elena Urioste and pianist Tom Poster - a married pair - decided to share a music video for every day spent in isolation. They called it The Jukebox. Little did they know it would turn into 88 days of musical adventures, with thousands of viewers tuning in and submitting requests throughout lockdown. It led to some eclectic performances, from Mozart to Led Zeppelin, and a medley of Come On Eileen/Toxic/Baby Shark. After winning the Royal Philharmonic Society’s Inspiration Award, the project has now hit the studio. The Jukebox Album features a collection of Jukebox favorites as well as six new works written for the project by Mark Simpson, Clarice Assad, Cheryl Frances-Hoad, Huw Watkins, Donald Grant, and Jessie Montgomery. BELOW: Trailer for the album.

On September 24th, the multi-Grammy nominated ARC Ensemble of Canada’s Royal Conservatory of Music will release a World Premiere recording “Chamber Works by Dmitri Klebanov,” the fifth in the group’s critically acclaimed “Music in Exile” series. A casualty of Soviet-era cultural repression and anti-Semitism, the remarkable music of Jewish-Ukrainian composer (1907-1986) will finally be heard after decades in obscurity. This album is the first commercial release of these exhilarating Klebanov pieces. BELOW: From the album, ARC Ensemble Performs Dmitri Klebanov’s String Quartet No. 4 , III. Scherzando:

No rehearsal, no preparation, no discussion. William Goldstein, 79, can sit down at the piano and instantly and without hesitation create a complex, fully formed musical composition, start to finish in real time. Each of the 11 tracks on this album showcases Goldstein engaging in a spontaneous dialogue with a second musician, the two trading ideas to produce structurally and emotionally compelling works of art. “All you have to do is listen,” Goldstein says. “I throw out an idea and the collaborator responds with something new and I react to that. Essentially we’re having a simultaneous conversation. Each of my collaborative compositions are unique because I'm working with different artists and that colors and changes everything." BELOW: Violinist Pei-Wen Liao and pianist/composer William Goldstein spontaneously create a movement for violin piano:

September 23, 2021 at 08:40 PM · Laurie was asking us if we had/cared about/still bought CD’s last week. There’s one I’m going to get, “The Jukebox Album,” if for no other reason than to have that beautiful rendition of Stephen Sondheim’s “Send In The Clowns.” Reason enough. Thanks for the tip!

September 24, 2021 at 08:05 AM · These "UriPoste" jukebox videos have been a beautiful and really open and fun result of the lockdown. Really good that they could produce an album from it.