September 15, 2021, 6:15 PM · J.S. Bach seemed to fully conquer the genre of "unaccompanied violin" when he wrote his Sonatas and Partitas for solo violin. He'd written so much, so well -- what was left for other composers to write?

That appears to be one of the questions that Eugène Ysaÿe was pondering when he wrote his "Obsession," the first movement from Sonata No. 2, dedicated to Jacques Thibaud. 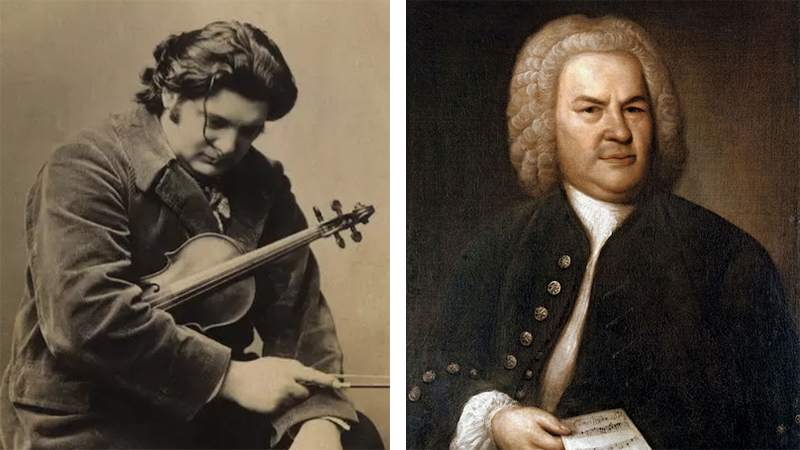 Ysaÿe's "Obsession" was the focus of the second part of a lecture by Brian Lewis called "All Alone: Repertoire for Solo Violin" at last summer's virtual Starling DeLay Symposium on Violin Studies at Juilliard.

What exactly was Ysaÿe's "obsession"? Bach, of course! And it's pretty obvious from the introduction to this piece, which quotes the "Preludio" from Bach's Partita in E major (see the first part of Brian's lecture, read here). Below is the beginning of the piece, as well as an amazing performance by Augustin Hadelich, so you can listen as you read: 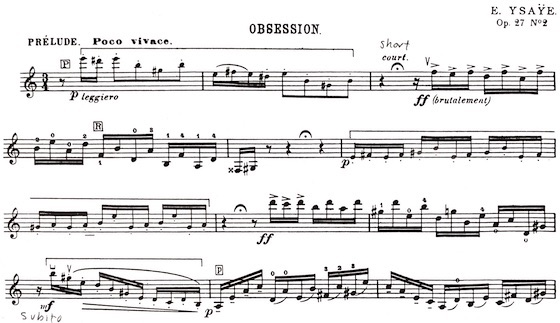 While Ysaÿe quotes directly from Bach in the first notes of "Obsession," the dynamics, pacing, articulation and character make it clear that this is not exactly a direct quote. "He's not quoting all the slurs," Lewis said, pointing to up-bow that breaks up the 16th notes in the second measure. Also, unlike Bach, Ysaÿe asks for the first two measures to be played "leggiero," (lightly and gracefully) and at the tip of the bow. Then after a pause, the violinist is to resume fortissimo, and "brutally"!

"People will be a little confused," Lewis said, "and we want that."

What follows after this introduction is a busy, 16th note-filled movement with plenty of bariolage - but that's where the comparison to Bach's Preludio ends. While Bach's Preludio wears a sunny disposition, Ysaÿes' Obsession plunges straight into dark themes. In m. 20 the tune that pokes out of all that bariolage is the "Dies Irae" -- from the Roman Catholic "Day of Wrath" chant. It has long been a symbol of death, used in requiems and by composers such as Berlioz, in his Symphonie Fantastique.

"The 'Dies Irae' is a weird thing to put in a piece of music," Lewis said. The Dies Irae is about 1,000 years old, and aside from the Berlioz it also appears many other pieces of music, including Liszt's Totentanz, Rachmaninov's Vocalise (well-disguised) and Rhapsody on a Theme by Paganini.

Putting all this symbolism aside, "Obsession" presents a number of technical issues for any violinist - though "this movement is the most approachable piece by Ysaÿe," Lewis said. For m. 11-19, it helps to "think chordally," Lewis said, and "whenever possible, practice in double stops."

In the above excerpt, Lewis boxed off the measures that can be practiced as double-stops, emphasizing that it's important to practice them perfectly in tune. Ysaÿe, lauded as one of the best violinists of his day, provides his own fingerings fairly often in the score - unlike Bach. Throughout the Six Sonatas, Ysaÿe also uses his own special set of symbols, which are defined in a glossary at the front of the editions. (The definitions are in French, but Lewis said that the Henle edition provides a good English translation).

Another issue for students or people first learning this piece can be the fifths and tenths that appear throughout. Measures 35-41 can be given to a student as a preview, before he or she even starts learning the piece.

"With 10ths, reaching up can be murderous," Lewis said. Instead, find the top note and reach back. Students can also tap into a book of exercises that Ysaÿe wrote called 10 Préludes. Each prélue explores a different double-stop interval -- Prélude 1 features unison double stops, Prélude 2 features seconds, Prélude 3 thirds, etc. So one can practice the Préludes 5 and 10 for fifths and 10ths.

A note about editions of the Ysaÿe Sonatas: the widely-used Schirmer edition "has a number of mistakes," Lewis said. The Henle edition, he said, corrects those mistakes.

Ysaÿe wrote the Six Sonatas in 1923 - nearly a century ago, but students still find the harmonic language to be interesting and unique.

September 16, 2021 at 05:55 PM · Great presentation. For anyone who has never heard the few rare recordings Ysaye made, it is clear he was truly one of a kind.

This section also quotes Dies Irae in the last phrase. Don't understand why he said that's a 'weird thing to put in a piece of music' when it's a continual thread through musical history and liturgy.

I love the "Melancolia." I've said it before, but I hear so many parallels between the "Melancolia" and a particular part of certain movie score by John Williams - Anakin's Theme from Star Wars, particularly at the very end. Ysaÿe quotes the Dies Irae, in such a ghostly, distant way -- Williams does something similar, appending Darth Vader's theme at the end of Anakin's Theme, in a very quiet and subtle way. In both cases, it sounds so resigned and chilling, when you recognize what the theme means.

and the Partitas, likewise, without Scratch on All Chording throughout, one is enabled w/refined bowing to traverse All Eugen Ysaye Solo Violin Sonata's! This is a sweeping statement not lightly made but through one's long due diligence violinistically = left hand development and The Devil of Bowing Superiority which few possess either due to false/mythical ideas re How

to bow at the Frog; Middle; upper Midfle and Tip which if taught as 'Straight Bow' theory defeats

as one's parents were 'elite' musicians with Mother, Arnold Schoenberg's Pianist at UCLA, for

All Schoenberg Advanced Classes in Theory; Orchestral Structure and Composition, having a

the piano, and impromptu performing vast portions of Schoenberg's Symphonic & Chamber Symphonic Symphonies near flawlessly. Being imbued with tremendous accents on the vital role harmony with melody played for any musician, one sat at the piano learning, literally, the

which in a Musician Fidel Household was interpreted far differently!! The 'accent' was on the Whole, aka, Spiritual Messages contained within any movement of all Bach Sonatas & Partitas

for Violin and including all Brandenburg's, Masses, Tocatta's and 'the Lot' which gave a young

Not possible to cover such a ime honoured Subject, one simply must feel spiritually imbued &

Before learning any 'piece' of JS Bach ... This is either In or Not In the DNA of all aspiring to

learn and perform Unaccompanied Bach plus other Marvel's of Compositions by Bach, i.e., the

Violin concerti; the Oboe & Violin Concerto; the honour of sitting in the violin section of an orchestra rehearsing the Mass in b minor & St. John Passion, to absorb Bach's allegiance to a

Spiritual Realm rather than a Violin display of just playing Bach ~

Partitas, throughout his over 73 year concert career, was a final commendation of one's early

Orchestra Builder Author of The Youth Orchestra 'Movement' in America, Ralph}, of Bach in All

his Compositions for Violin whether Solo Sonatas & Partitas or in Chamber & Orchestral & Orchestra with Choral settings! The 'tool box' of authentic rounded Bowing was a Gift from the

Great Nathan Milstein, and for a period of over 3 & 1/2 Years, privately, at his London Chester Square home twice weekly for no less than 3 & 1/2 to even 5 hours each 'tutorial' ~ It was an

invited by Milstein to come round to play Bach's Chaconne to him!!! Long glorious Story made

Liberation at Last to reproduce that in one's mind onto the violin & as Choral Work's ...

Performing Bach gives Grace in performing Ysaye's Solo Sonatas for Violin, but it is mandatory

to approach Ysaye composition with a Bachian mind-set spiritually aware attitude. The Ego'd

Violinist will never convince new listener's of the Glory of Ysaye! Having heard many Soloist

through Ysaye's Sonatas & particularly the Third in D Major, "Ballade" as if it were Paganini in

Caprice 'mode', was and is alarming. Period. Pethaps one must endure huge vicissitudes of

my point from near 69 Years experience playing, teaching, relearning & entering into Spiritual

via Urtext, minus confangled bowings & inserted Fingerings on a shelf to be later viewed but in

a vastly expanded overview Later and only RX here, Watch/Listen to Nathan Milstein in Bach

September 20, 2021 at 12:22 AM · Laurie, interesting about the Anakin's theme. It's a totally different and orchestral, but it does have a really similar 'feel' to Melancolia.