September 13, 2021, 1:05 AM · Last weekend brought numerous tributes and memorials to the victims of September 11, 2001, with radio stations, news channels and social networks marking the 20th year since that horrible day, with features, speeches and stories.

But for focused reflection that's little less news-heavy, I would agree with Patrick Scott, who said that "music may be the best way to experience this anniversary."

Scott is the Artistic and Executive Director of Jacaranda, a Chamber Music LA series that presented a concert Saturday night in Santa Monica, Calif. called "Twin Towers," featuring the Lyris Quartet as well as the West Coast Premiere of Anthony Davis's 2002 piece "Restless Mourning," with a small chamber ensemble and eight voices.

Before the music even began, the stage design set the tone, with two blue lights pointing upward on either side of the stage, bringing to mind Manhattan's Tribute in Light, the two blue beams that shine skyward each year in Battery Park, just south of the World Trade Center, to represent the Twin Towers. They have been used as a tribute each year on the 9/11 anniversary since 2003. 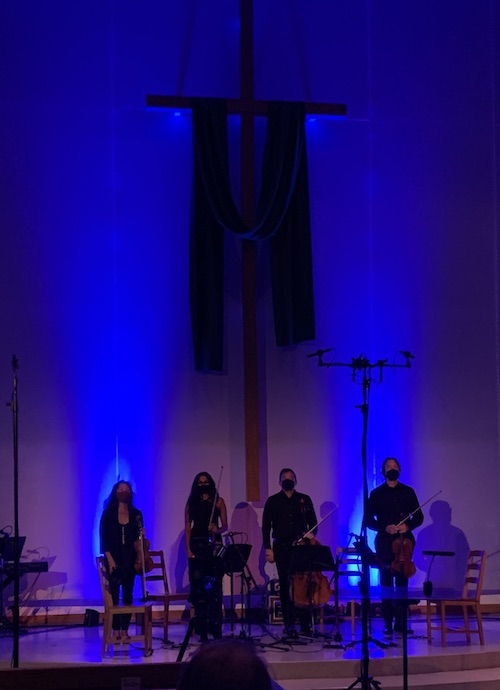 The Lyris Quartet in performance Saturday.

The Lyris Quartet, which consists of violinists Alyssa Park and Shalini Vijayan, violist Luke Maurer and cellist Timothy Loo, began with a performance of Joan Tower's "In Memory," written in 2002. As the excellent program notes by Scott explain, the quartet began as Tower's expression of grief over the loss of her close friend, Margaret Shafer. But about a month into writing it, the Twin Towers came down, and the quartet she was writing grew into a larger and more intense expression of not just her own grief, but of communal anguish over 9/11.

Indeed, the piece begins with the voice of one violin, melancholy and alone, then soon after is joined by the second violin. Park and Vijayan immediately won me over with the immediacy of their musical voices. Maurer and Loo joined in, and just as I was marveling at the beauty of their sound-blend, the music took a turn, erupting in fast triplets. As Tower describes it "the pain and anger get quite wild," and she's not kidding. It grew distressing, panicky and hurried - then again quieted and became still.

This was a live concert in a church, and to my left I noticed that behind the stained glass window, emergency lights from a police car had started to blink blue and red - who knows why, it's a busy city. But somehow a distress signal shining through the spiritual images on a glass window seemed an apt reflection of the evening's message. After another barrage of noisy and neurotic notes, the piece slowed again and ended with all instruments in unison, playing the same note.

Next was Steve Reich's 2011 piece, "WTC 9/11," written in the composer's minimalist style but also incorporating recordings of the human voice, including recordings from NORAD, the New York City Fire Department and interviews with friends and neighbors who lived or worked in lower Manhattan. 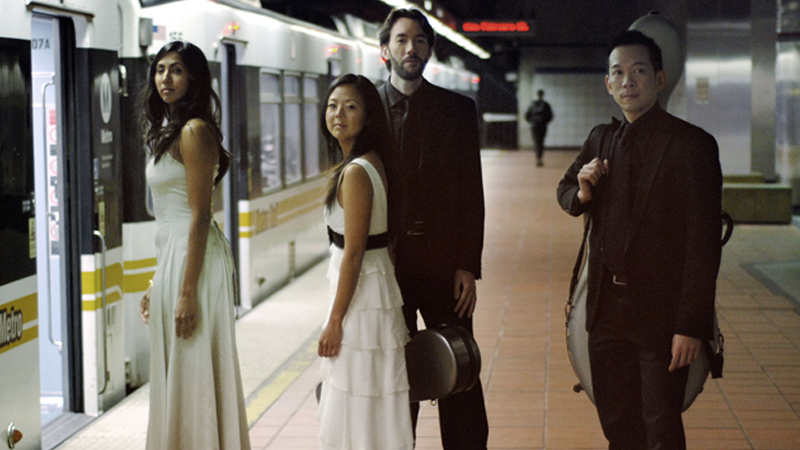 For me, this was the heart of the concert; Reich's unique language went straight to the emotions of this horrible day and its aftermath without any need for translation, and the musicians of the Lyris Quartet, with live-sound mixer Scott Fraser, met the challenge of synchronizing with a pre-recorded track in a way that brought experience alive.

The first movement, called "9/11/01," begins with the alarming sound that a phone used to make when it was off the hook - meaning the phone was unattended and no one could get through. It features sounds from NORAD, where traffic controllers were panicking over the path of Flight 11, which later crashed into North Tower of the World Trade Center. The strings (eight pre-recorded and four live) elongate the sound of the human voices, also imitating the rhythm and tone of speech patterns. I could not discern any of the words, but it didn't matter - this captured the cadence of panic in the voices, amplifying their distress and ever-increasing volume. The second movement, "2010," drew on interviews with people who described their experience on that day, in that place. In this movement, certain phrases poked out of the texture from time to time and were repeated: "It was not an accident." "It was chaos." "The ground started shaking." "Run for your lives." "I could not see in front of me." It became hypnotic and repetitive, with the disjointed noises and phrases circling around to create a sense of the chaos that overtook that day. The last movement, called "WTC," included the sounds of women reciting Psalms and Biblical passages, sitting Shmira for the bodies that could not be buried for some seven months following the disaster, due to the difficulty in identifying their remains. The piece ends with the same signal as it started with - the phone off the hook.

The Lyris Quartet followed Reich's extremely intense piece with Samuel Barber's "Adagio for Strings," a piece so mournful - and for a time over-played - it can be hard to listen to it. But the Barber worked well to mark the sorrow following so much anxiety. Played by just four musicians, the piece took on a welcome simplicity, with less full-bodied emotion and more vulnerability than when played by a larger string ensemble. It featured beautiful playing by all, but especially by cellist Loo.

The program ended with Davis' "Restless Mourning," performed by the vocal group Tonality, the Jacaranda Chamber Ensemble, and conductor Anthony Parnther, along with recorded sound. The piece is set to several intensely vivid poems by Quincy Troupe and Allan Havis, plus text from Psalm 102.

September 13, 2021 at 11:15 PM · This sounds like a truly beautiful program and a fitting way to commemorate this solemn occasion. I simply couldn't bring myself to watch the documentaries nor the news coverage. (And I'm not proud of myself for that.) I lived within an hour of ground zero on 9/11, and I'll never forget the horror of that day. Wanting to get my little boy from elementary school, but being told we should let the kids stay in school so they wouldn't be overly scared. My friends waiting at the train station, hoping their husbands or wives would get off the train... and knowing for some, they wouldn't. And, underlying it all, knowing I had an appointment at ground zero the next day and that only the luck of the calendar had kept me from being there one day earlier. I agree with Patrick Scott. Music, simply music, is the way to remember this incredible tragedy and take to our hearts all its innocent victims. I thank you, Laurie, and also the Lyris Quartet, for remembering on behalf of many of us who simply couldn't find the proper way.