August 16, 2021, 3:24 PM · It's not easy to give birth to a new violin concerto during a global pandemic, but on August 24 it is finally happening: violinist Anne Akiko Meyers will premiere "Fandango," a new violin concerto by Mexican composer Arturo Márquez, with Los Angeles Philharmonic, conducted by Gustavo Dudamel, at the Hollywood Bowl.

For Meyers, it all began when she heard Márquez's "Danzón No. 2." It's one of those love-at-first-listen pieces that has the power to stick in the mind and make people dance their way out of the concert hall after hearing it. I can attest to that personally - I've had the pleasure of playing it from the violin section, in one of the last concerts I played with the Pasadena Symphony right before the pandemic. Since its premiere in 1994 in Mexico City, the piece has grown steadily in popularity, given momentum by Gustavo Dudamel and the Simón Bolívar Youth Orchestra of Venezuela, who included it in their 2007 European and American tour. It also has been transcribed for concert band and for piano, used in a short film, and included on the streaming show Mozart in the Jungle.

No wonder Meyers flipped her lid when she heard it for the first time in 2017, played by the Detroit Symphony. "It blew my mind," Meyers told me last month in a phone interview. "It just grabbed my imagination and my attention immediately when it started."

Here is a video of "Danzón No. 2," so you can listen as you read - this is Gustavo Dudamel, conducting the Simón Bolívar Symphony Orchestra in 2015:

"I thought, this is genius, it's so colorful," Meyers said. "It reminded me of Ravel's 'Bolero,' and the orchestration was just so spectacular. I waited until the end of the performance, and then I looked up the composer. That's when I discovered - this person is a living composer! I had to track him down."

Indeed, the Mexican composer Arturo Márquez, who turned 70 in December, lives in Cuernavaca, Mexico, about an hour south of Mexico City, along with his wife, Laura Calderón. But he's not necessarily that easy to reach.

Meyers tracked down his publisher and asked, would Márquez have any interest in writing a violin concerto? The publisher gave her the contact information but was not particularly encouraging.

"The publisher said, well, he lives in Mexico and you can try, but it's really hard to pin him down," Meyers said. It took her a while to muster up the courage, but "I sent an e-mail to him a year later, in 2018. I said, 'Your music is just so magical, would you consider writing a mariachi-inspired concerto, as well as a shorter work for violin and piano?'"

To her great delight, he said yes. He was intrigued by the idea.

"When I got the response, I was just jumping up and down," Meyers said. "I felt like I had cracked the Da Vinci Code, seriously! He is a very elusive composer, and to even imagine having a piece like this -- in this exciting, folkloric, Mexican tradition, written by him in today's language -- was beyond exciting to me. It was such a dream come true." 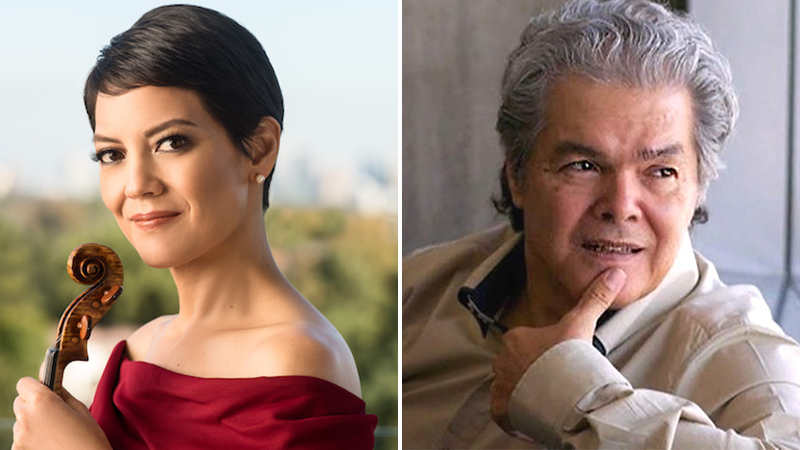 For his part, Márquez, in a written statement about the piece, said that "the proposal interested and fascinated me from that very moment, not only because of Maestra Meyers' emotional aesthetic proposal, but also because of my admiration for her musicality, virtuosity and, above all, for her courage in proposing a concerto so out of the ordinary."

"I had already tried, unsuccessfully, to compose a violin concerto some 20 years earlier with ideas that were based on the Mexican Fandango," Márquez said. "I have known this music since I was a child, listening to it in the cinema, on the radio, and listening to my father, Arturo Márquez Sr., a mariachi violinist, interpret huastecos and mariachi music."

During the pandemic, Márquez came to Los Angeles, and met Meyers for lunch to talk about the concerto. 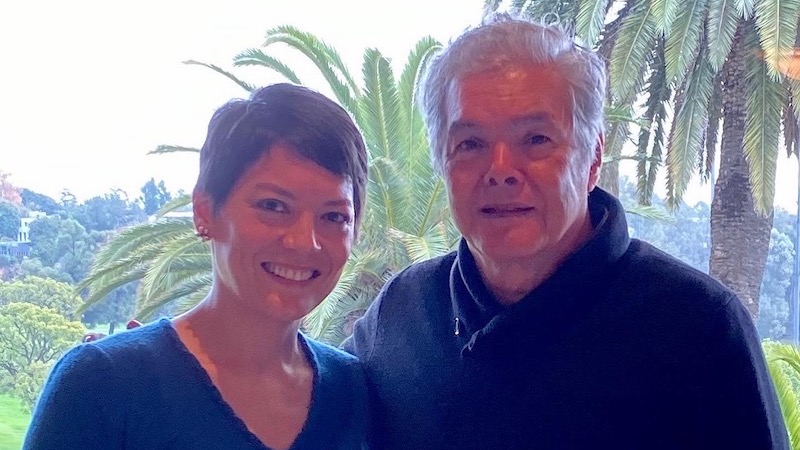 "He was telling me how thankful he was that I had asked him to write this concerto," Meyers said. "He said that he'd had this piece in his heart for the last 25 years, and he was just waiting for the right moment for it to fly. I cried when I heard that. I couldn't believe it."

The composer's first instrument was actually the violin, which he started playing at age 14, studying it in the Los Angeles suburb of La Puente, where he spent his high school years.

He said he is thrilled that Meyers will be premiering the work with the Los Angeles Philharmonic and Gustavo Dudamel - "Beautiful coincidence, as I have no doubt that Fandango was danced in California in the 18th and 19th centuries," Márquez said.

Of course, the pandemic made everything much more difficult, and the concerto had a number of false starts.

"It was a bumpy path," Meyer said. "He agreed to write it, and then the pandemic hit."

Originally, Meyers was to have premiered the work in 2020. "He sent me the first movement and fragments of the second movement, pretty close to the date in 2020," Meyers said. "I was wondering, where is the rest of it? We aren't going to be able to make it in time! Then the date was cancelled."

Meyers was writing to him throughout this time, to check on his overall mindset. The piece was progressing, but it was also changing.

She received the new version in early April 2021, and there was talk about having a soft opening at the Hollywood Bowl just a few weeks later, to perform for front-line workers.

"I immediately panicked -- I had about six weeks to learn it, to try to devour and consume this colossal work," Meyers said. The piece runs a little over 30 minutes, "but the idiom is so colossal, with all the technique and the rhythmic challenges. He has so much to say in it. There's a lot of scrubbing, too, lots of repeated notes. Physically, it's very, very demanding."

To get to know the brand-new piece, Meyers could refer to the music, as well as a midi file that Márquez provided. Violinist and composer had a Zoom session, and "when I played it for him, I thought it was already at breakneck tempo," Meyers said. "Then he said, 'I want it faster!' I said, 'I don't know if it's physically possible!'"

Then, due to various COVID rules and space constraints, that concert also was cancelled. The piece was beginning to feel like some kind of hot potato, she said.

After that, "it took me some time to get back to working on it because I had to also work on the Beethoven Violin Concerto and new cadenzas by John Corigliano," Meyers said.

At this point, though, she is ready for this premiere to really happen.

"People are going to go nuts when they hear this concerto!" she said. "There is nothing like it - - I cannot think of another violin concerto like it."

"The color, the Spanish themes, the Mexican hymns, the mariachi-inspired phrasing - it's joyous, and it's faster than heck," she said. "You really have to run, and when you're running, there's a freedom. You can't hold back when you run. You have to train, especially to be able to fly free."

But it also has its introspective moments, especially in the second movement, entitled
"Plegaria," or "Prayer." Márquez is an avid dancer, and "you can feel the dance rhythms throughout. With it being also a Sarabande and Chaconne - everything is triple meter, yet it's a slow triple meter, but he seems to write always in eights. So you have this three-against-eight feel, all the time."

Márquez will attend the premiere, and for him it will almost be a pilgrimage - on his way to Los Angeles, he will visit the tombstones of his parents, who are buried in El Centro, directly east of San Diego.

"I've never experienced anything like this concerto, and for that I'm so grateful to Maestro Márquez," Meyers said. "This is how I become a better musician, a better artist, because it's taking me to places that I've never would have dreamt of going."

For more information about August 24 premiere at the Hollywood Bowl, please Click here. Meyers also is scheduled to play "Fandango" with the Santa Barbara Symphony in January 2022, with Nir Kabaretti conducting.

(The stilted translation our house employed in the House Music competition, Unison module, kept the word "Fandango". Fortunately, a new boy had replaced me on the piano, otherwise we'd have had to choose a song with an easier piano part - and THEN I'd probably have fluffed some of it, as I had with Wolf's "Fussreise" - for which I'd already simplified the piano part, and in a simpler key - - the previous year)

The word "Fandango" is similar, but probably not derived from the word Huapango, which is a gulf coast native language word for "on the wood". The Violin solo style Huasteco is named after an Indian tribe from that area, gulf coast, around Tampico. Huasteco/Huapango is one of several regional music styles that was absorbed by the modern Mariachi. One of the classic huasteco song titles is Fandanguito. In early California, Fandango was the generic word for a dance party. In addition to that section in Marriage of Figaro, there is a Fandango in one of the Bocherinni guitar quintets,, and section from Gluck's Don Juan ballet. The Fandango may have originated in Mexico before moving to Europe.