How the Talents of Many Built Success for Bravo! Vail Music Festival

August 10, 2021, 11:10 PM · Taking up the violin can lead to any of a wide variety of music careers. Consider Caitlin Murray, who has been Executive Director of the Bravo! Vail Music Festival since 2018. Her story is one of the best.

"I grew up playing the violin," Murray said. "I started taking violin lessons at a very young age, but never at a serious level. That was not ever going to be a path for me." 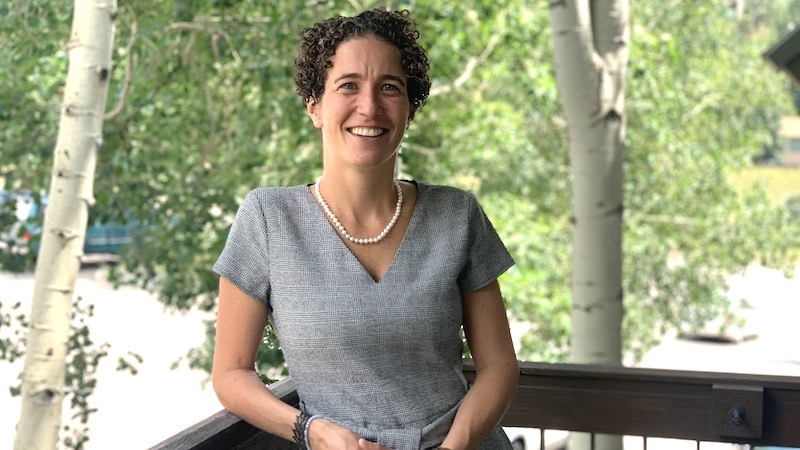 As a teenager, she simply didn't want to practice any more and stopped playing. Her father, an attorney, was heartbroken. "It was a very big deal to him, because that was an opportunity that he had never had. So I went off to college, and my dad picked up my violin. And he started taking lessons and playing. You can imagine, a man in his mid-40s picking up a violin for the first time, having never played - it was painful! But he practiced, and to this day, he plays first violin in his community orchestra back in New Jersey."

After college, Murray moved to Colorado and eventually started working for Bravo! Vail, "and one day, my violin showed up in the mail, because my dad had bought himself a much nicer instrument."

She still doesn't play much - she claims that her dog exits the room when she hears the sound of the case opening. But recently, as a quarantine project, her dad proposed giving her weekly FaceTime violin lessons, and she said yes.

"We did a Christmas concert for the family - and then we did a St. Patrick's Day concert and we played all Irish fiddle music," she said.

In other words, Murray keeps playing - for the love of music, and for the connection.

Understanding that deep connection to music - and the way it can connect us to each other, has been a key part of Murray's success at Bravo! Vail, a festival that has grown enormously since its founding in the 1980s. It has simultaneously gained world stature while becoming part of the economic fabric of its community in Colorado.

Before becoming Executive Director, Murray actually worked for nearly 10 years in fundraising and development for Bravo! as well as Colorado Public Radio. Her philosophy of fundraising speaks to that sense of inclusiveness.

So how did a little chamber music festival in a Colorado ski town grow into a decades-long tradition that now presents world-class classical artists and attracts tens of thousands of ardent patrons from all around the region, and world?

Bravo! Vail was founded in 1987 by violinist Ida Kavafian and a music-loving attorney from New Mexico named John Giovando. Kavafian had been running a chamber music festival called Angelfire in New Mexico, and basically she brought it to Vail, Colorado, situated in the middle of the Rocky Mountains, along I-70. That year, the festival attracted just a few hundred audience members to a handful of outdoor chamber music concerts. "It was so cold we would build bonfires in barrels on the stage, and the audience would sit around them just to keep warm!" Giovando has said.

Then the festival started growing - in a major way. Giovando led the group through 25 seasons, before retiring. Murray took the reins several years later. Eugenia Zukerman followed Kavafian as Artistic Director in 1998, and then in 2010, pianist Anne-Marie McDermott took on the artistic leadership.

In recent years up until the pandemic, Bravo! Vail was attracting around 60,000 audience members to about 60 performances per summer with top artists, orchestras and chamber groups from around the world. And now Vail and neighboring Beaver Creek can offer plenty of indoor venues for performances, and since 2000, a fully-renovated Ford Amphitheater. It has also expanded to offer free community concerts and year-round music education programs.

During the pandemic, Bravo! kept things going -- with a great deal of invention. Bravo! Education Director Brooklynn Phillips explained their most creative innovation to me: "It started out as this crazy idea to put a piano on the back of a trailer and drive it through parts of our community and neighborhoods and have concerts - but we realized very soon that weather and other factors would be a problem," Phillips said. "So our Director of Production, Todd Howe, had this brilliant idea to work with a Tiny Home builder."

With that builder, Bravo! Vail created its Music Box -- a Tiny Home that's on hydraulics and folds out to be a stage. A Yamaha AvantGrand Piano lives in the Music Box, which can fit up to a sextet comfortably. 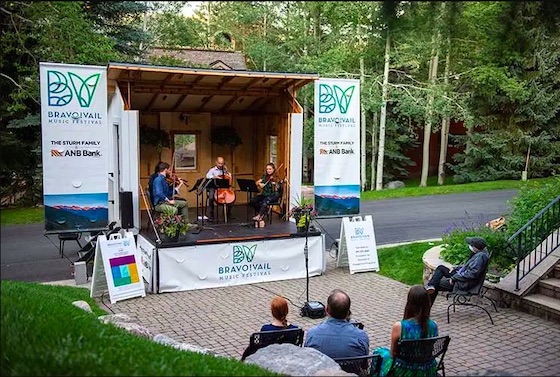 "We used it in parts of our community we wouldn't have otherwise had access to," Phillips said, "and we did more than 50 concerts out in the community, during COVID, in the summer of 2020." That same summer, Bravo! also had eight chamber music concerts on stage at the amphitheater for audiences of 175 people, featuring McDermott and 12 other musicians.

After getting through the difficult and much-abridged pandemic year, Bravo! Vail forged ahead with bigger plans for this summer, with an ambitious six-week festival.

"It's an exhilarating festival, and this year even more so," said Artistic Director McDermott, who not only plans the concerts but also performs in a great many of them. "There have been so many times I just wanted to burst out crying because it just feels so joyful, after last year and after everything we've all been through as a society."

What's more, this festival seems to have a devout following, including audience members who come from the mountain towns all around Vail as well as those who travel from places like New York and Dallas. For the performances I attended in late July, I found myself sitting next to people from places like Rifle, Colorado, who had been attending the festival faithfully for more than 15 years.

"There are a few of the founding members who actually signed the articles of incorporation who are still at concerts every night," Murray said. "They all have stories about how, early on, nobody here really knew what chamber music was. They tell stories about having more people on the stage than in the audience, and on cold nights, since they had room on the stage, just bringing the whole audience up on stage with them if it was raining."

They were learning as they went along, and after just two years they started bringing in orchestras - the Colorado Symphony, the Rochester Philharmonic.

"Ultimately over time, they taught themselves how to host an orchestra and what that was like," Murray said.

When McDermott came on as Artistic Director a little more than a decade ago, she brought the perspective of an avid and active chamber musician to the organization and renewed its continued commitment to that genre, as well as adding a host of new programs. 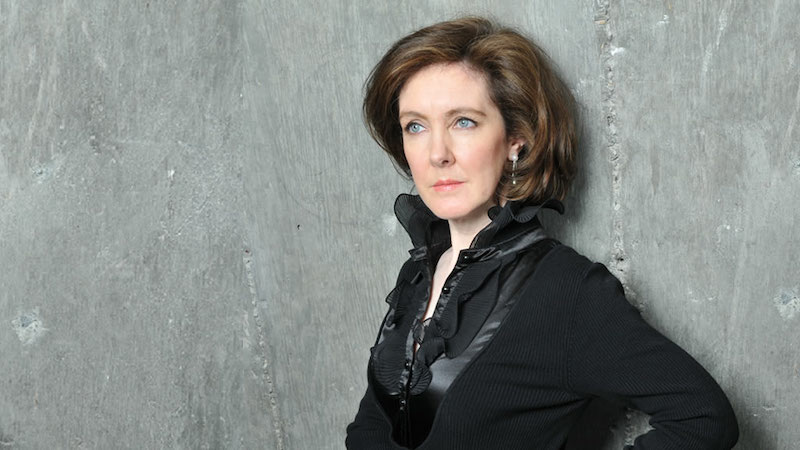 Chamber music was actually something McDermott had to fight for, in her own career.

"My career has been very uniquely my career," McDermott told me. "I've always played a ton of chamber music, and back in my early 20s, what I was being told by management was that I had to stop playing chamber music, because people would think I was a 'chamber music pianist.' That was the attitude back then: that people aren't going to hire you for concertos if they see that you are playing chamber music. Thank goodness, that has changed."

McDermott plays concertos, chamber music and a lot more. She is also artistic director for three other chamber festivals: Santa Fe Pro Musica, Ocean Reef Festival and Chamber Music Festival at The McKnight Center for the Performing Arts. During this year's Bravo!Vail Music Festival, McDermott played a Mozart concerto with the Saint Paul Chamber Orchestra, a quintet with the New York Philharmonic, and was the "Robot Piano Teacher" for a series of free educational family concerts - among other performances.

"For me personally, playing and performing is my sanity. In the midst of the craziness of a six-week festival, playing is my sacred place," McDermott said. "It's important for the artistic director of any organization to actually be one of the performers. It sends a powerful message to the whole community, that if I'm going to be advocating, 'I think we should invite this artist to come,' the fact that I'm also a performer gives me more credibility."

In addition to that, McDermott started a number of new programs, among them a Piano Fellows program; a New Works Fund; an "After School Strings Program; and just this year, a Symphonic Commissioning Fund.

"I still have my notebook from before I got the job at Bravo! Vail," she said. "One of the first things I wrote to myself was that I wanted to make Bravo! Vail a hotbed for musicians, so that musicians from all around the world would want to be here because they hear such great things about how they're treated here, how the audiences are here, how beloved and loved they are when they come here. That's really important to me, and I feel like every season we deepen those relationships."