Behind the Orchestral Curtain with Philadelphia Orchestra Concertmaster David Kim

August 2, 2021, 3:35 PM · As Concertmaster of the Philadelphia Orchestra for more than 20 years, violinist David Kim has sat behind the curtain as a jury member for countless orchestral auditions. He knows - from personal experience - that winning an audition and landing a spot in a major orchestra is a life-transforming experience. 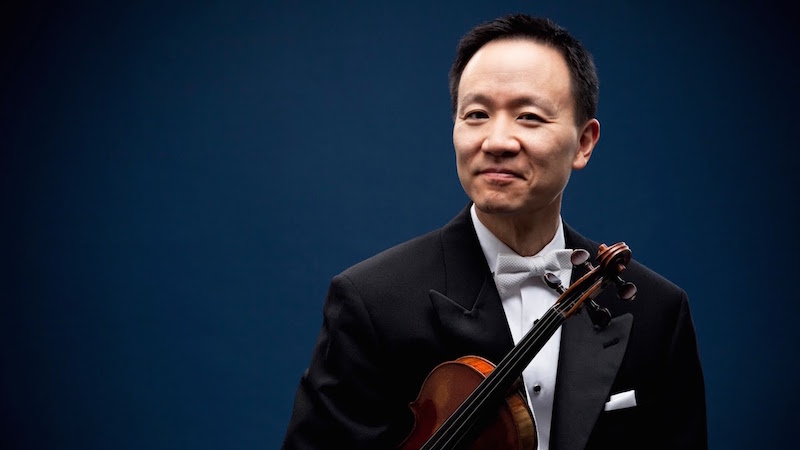 Generally, the folks behind the curtain are rooting for you, he said.

"We always want to give the benefit of the doubt," he said, in a talk at the 2021 Starling-DeLay Violin Symposium at The Juilliard School earlier this summer. "We are not trying to trick you or throw you a curveball."

That said, within the first 10 seconds, the jury can generally tell if a candidate will go on to the next round. They are looking for good intonation, solid rhythm, stability, and a kind of natural musicality - a feeling of easy-going music-making.

With those things in mind, Kim gave us a great overview of five basic excerpts that students should know -- excerpts that many professional orchestras require for auditions. Here is a rundown of those excerpts, as well as Kim's thoughts about each one:

While a lot of violinists see this simply as an off-the-string excerpt, "it's a delicate combination of many different strokes, mostly off the string," Kim said. Yes, there is spiccato involved, but "actually you don't end up playing off the string that much. A lot of it is that great stroke, sautillé - in the middle, half-brush, ringing stroke. Just once in a while you go really off-the-string." This excerpt shows - or can show - how great your bow arm is.

The infamous Don Juan! There is a reason that this excerpt - the first page of the Violin 1 part of this piece - makes the audition list for so many professional orchestras. "After hearing it thousands of times, this excerpt is just so revealing," Kim said. "It exposes intonation, shifting, and self-control." It's a more elegant excerpt than people might think, and one key bit of advice is to avoid over-playing, he said.

This symphony can be used for a number of excerpts - most often, orchestras ask for the exposition in the first, second and/or fourth movements. "This music shows your elegance and your Mozart style," Kim said. "Technically, there are much more difficult pieces out there, but we are looking to see if you have that Mozart language in your blood."

The excerpts tend to be the coda from the first movement, and the beginning of the fourth-movement Passacaglia. "This is very revealing," Kim said. "It shows if you are barely preparing for an audition or if you really are experienced and have played a lot of this music." Jurors tend to be looking for "a solid, easily-digestible and lovely musical language. A lot of people over-play this excerpt - it can be crunchy or over-powering. So it is important that this excerpt has elegance as well as power.

The first page of the Scherzo starts very quietly, pianissimo, with off-the-string triplets, then it builds halfway through the page to a fortissimo. Tricky! "You have to show a lot of great bow control, in a variety of dynamics," Kim said.

Kim also talked a little bit about his own role as concertmaster in Philadelphia.

"It took me a few years in the beginning to understand my place as concertmaster," Kim said. "I thought that the concertmaster was the leader onstage, off-stage and everything - and that's not true. I am not the policeman of the orchestra, not the traffic cop."

While that is true, at times he has to have to be a diplomat, having discussions with people, make things okay, and eliminating tension on stage. In those cases, communication is always key: speaking slowly, and starting with an apology, if needed.

How much should a violinist practice?

"It depends," Kim said, adding that at this point he practices about one to two hours a day. That said, he has noticed that for a high-level player "there has to be three or four periods in one's life where you practice a LOT and HARD," Kim said. Like five hours a day. "But nobody can sustain five hours a day over a whole lifetime - our bodies are not meant for that. But consistency of practice is important."

He definitely had those periods of focus and non-stop practice in his own life. When someone has put in those periods of intense devotion to practice, "I feel like I know it, when I hear somebody who has done that."

When Kim prepares for a performance as a soloist, he tries to make his day as serene as possible, he said.

When he was younger, he did the opposite: he would go in a practice room, practice energetically and "get psyched." Now, a few more years down the road, he tends to avoid socializing, takes a short nap and does a little slow wood-shedding right before. A devoted Christian, he also prays.

In fact, his faith is a very important part of his life. In 2006 he made an album called The Lord is My Shepherd, and "my sacred album has been the most successful by far - maybe God had a plan for that," he said.

It has also been key in dealing with things like stage fright.

"All of us deal with insecurity," he said, "and people think that once you become concertmaster of the Philadelphia Orchestra you're kind of bulletproof and okay with anything -- no. It gets worse, actually. I suffer from terrible stage fright - my faith is the only way I can get through it sometimes. I'll get on my knees and say, 'Help me play for your enjoyment and glory, not for my worry about what people think of me.'"

Such profound words. Thank you for sharing this. That is a real blessing. I can really get hung up on worrying about what people think. I’m grateful for this great perspective. God does speak to us through each other. It’s also great to know that I am not alone in being nervous to play. God bless you all. Thank you Mr. Kim for your amazing perspective.