Interview: Viano String Quartet at Bravo! Vail - Staying Together Through the Pandemic

August 1, 2021, 1:32 PM · One of the most captivating performances I saw during my time at Bravo! Vail Music Festival was actually a concert at a smaller venue - a performance by the Viano String Quartet at the Vail Interfaith Chapel.

The chapel's architectural design focuses one's attention on a window at the back. This window, with its panes that seem to point skyward, offers a view of a majestic mountain pine that stands just outside, surrounded by more pines.

How appropriate, then, that the Viano Quartet was performing a new work by Pulitzer Prize-winning composer Caroline Shaw called "Evergreen" - a musical portrait of just such a tree, with movements entitled Moss, Stem, Water, and Root. 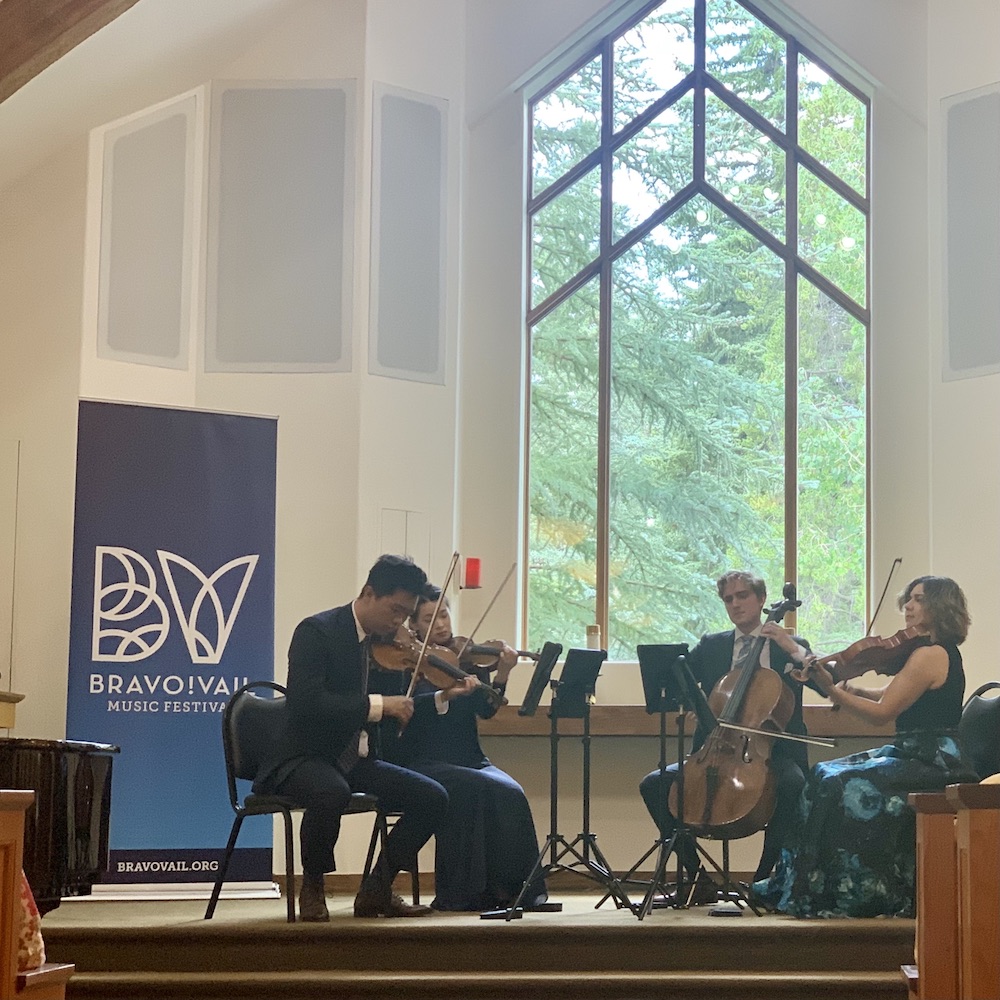 The music was atmospheric and spellbinding - glassy harmonics, woody-sounding ricochet, ploppy-sounding pizzicato that sounded like raindrops, and mesmerizing repetition. I began to think of that tree outside as an honorary audience member, watching and listening from the window. As the piece ended, a bird chirped outside. I nearly had to pinch myself.

The Viano Quartet was formed in 2015 at The Colburn School in Los Angeles. Members - all in their mid-20s - include violinists Hao Zhou and Lucy Wang, violist Aiden Kane and cellist Tate Zawadiuk. First Prize winners of the 2019 Banff International String Quartet Competition, they just finished their time as Ensemble-in-Residence at the Colburn School. In the fall they will become the Graduate Quartet-in-Residence at the Curtis Institute of Music. As Chamber Musicians-in-Residence at Bravo! Vail this summer, they performed for community concerts, a house-concert "soirée series," and educational concerts.

Their concert on July 22 also included Antonin Dvorak's String Quartet in G major, Op. 106, which Zhou introduced from stage, saying, "Dvorak is a composer who really unleashed the power and possibilities of the string quartet," adding that his way of writing was more democratic, with "each instrument getting a chance to shine."

Zhou's words could easily have applied to the Vianos themselves - playing with fierce intensity yet carefully and respectfully directing the spotlight at any one of them whose voice should be emphasized in the moment. When I interviewed them following the concert, they even spoke in the same way, no one ever running over anyone else.

How did they feel about "Evergreen"? I asked. Does this music put them in a hypnotic state, as it did to me?

"After we play this piece, we always have to wait a second to bring ourselves back to being human again," Zawadiuk said.

"We have to re-align ourselves," Zhou said. "It really transports you to a different space..."

"...and that's the goal with the audience, we want them to feel like that too," Zawadiuk said.

Zawadiuk took out the music, to show me a particularly interesting thing about the composer's writing. Incidentally, all of their music was on iPads, with special iPad stands and pager-turner pedals. (Two of them use the Firefly and two use Airturn Duo - they agree to disagree about which page-turner is superior.) 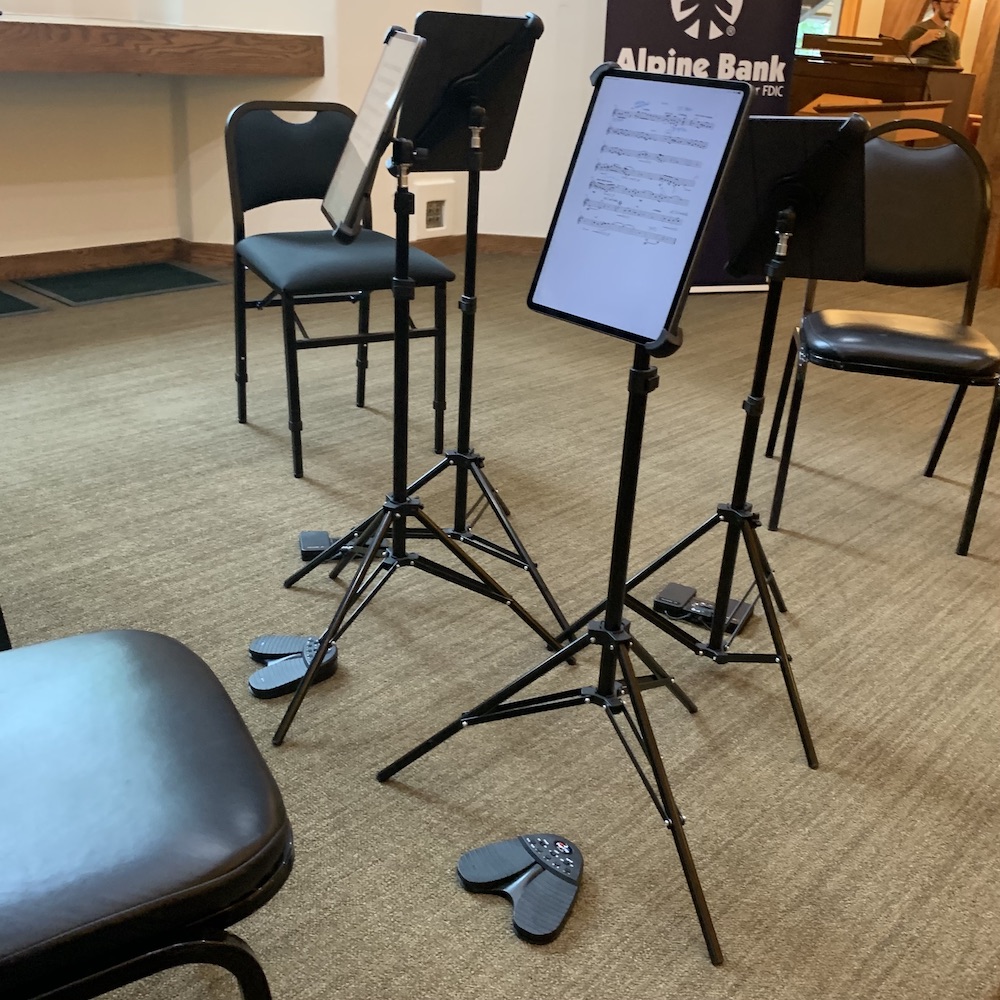 Pointing to a place in the first movement, called "Moss," Zawadiuk said, "She writes it like this: 'gauzy, uneven tremolo.'"

"Can you show her the third movement, because it's so cool.." said Kane.

"This is so cool," Zawadiuk agreed, finding the third movement. "There's always one voice that's in rhythm, and everyone else just fits their part in between, like water droplets."

"That's why we play the whole piece off the score," Zhou said. "That's the advantage of iPads, we can play things off the score."

"That movement would be impossible, off of individual parts, I think, because we would have to memorize who to come in after," Zawadiuk continued. "With the score, we can visually see who we come in after."

How did these four naturally curious and enthusiastic musicians find such a perfect match in each other? In truth, it all started as the musical equivalent of a blind date.

"In 2015, we all attended Colburn, and we were put together as a quartet by the faculty," Zawadiuk said. "We had our first performance together, and that performance was life-changing. There was a kind of energy and connection that none of us had ever felt before. On that stage, in that moment..."

"...everything just clicked," Wang said. "It's pretty rare -- usually people want to find their own people to form a group, but for us, we were put together, and it worked."

"We did have one member change in 2017, when Aiden joined us, and that's when we really got serious," Zawadiuk said.

"It was like a match made in heaven," Zhou said. 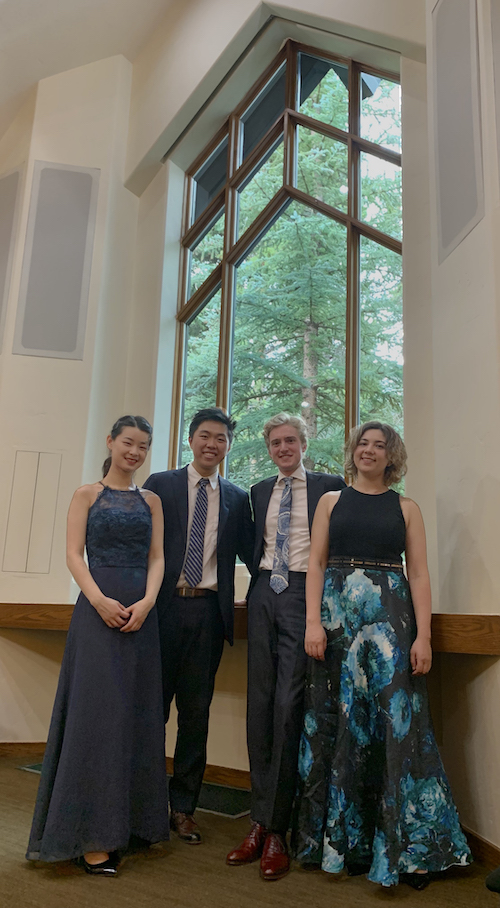 But like all good matches, this one was put to the test. In 2020, the sudden COVID-19 lockdown forced them to separate, sending them in four different directions. After a certain point, they made a rather radical decision: to rent a house and quarantine together. They told me how this decision came about:

"It was in March 2020, and we were about to have our New York Schneider Series debut," Zhou said. At that time, the quartet was in-residence at the Colburn School. "Then we got two messages: first, that the concert was cancelled, and second, that our school was closing down."

At that point, "we evacuated Los Angeles," Wang said. Kane went to Phoenix, Zhou and Wang went to Orange County, and Zawadiuk went to Vancouver.

"We had a week to get everything out of the dorms and go somewhere, and no one knew what was going on," Kane said, "so we headed back to family."

"It was pretty strange," Wang said. "I remember packing all my stuff up and I wasn't sure whether to bring my dresses because didn't know if our summer things were going to get cancelled."

At that point, "we didn't see each other for five whole months," Wang said.

In August 2020, they were supposed to go to the Banff International String Quartet Festival, having won the Banff competition in 2019. Since travel was not possible, Banff offered them the opportunity to record a program for them, and to use Colburn's facilities to do so. The work opportunity allowed Zawadiuk to drive down from Vancouver, and the group reunited to make the recording.

"After that, we decided, since we're already here, why don't we get together and just rehearse?" Wang said. "Because we really needed to make sure that we could hit the ground running, when everything went back to normal."

That's when they decided to just rent a place together, to enable them to rehearse. Of course, this was no simple decision, logistically.

"The real challenge was trying to find a place where there wouldn't be noise complaints, things like that," Zhou said. "So townhouses and apartments were mostly out of the question -- places with adjoining walls and things like that."

"Also, we needed four rooms, so we each had our own space," Kane said.

"We wanted to rent a place in Los Angeles because we were hoping to use the facilities at Colburn," Zawadiuk said. "But at the time, California had just put in stricter restrictions that wouldn't allow us to actually go into the school. Also, rent in LA was ridiculous. We had friends in Salt Lake City, and the rent was half of what it is in Los Angeles. So we ended up renting a house in Salt Lake City for three months."

After a break to see family in December 2020, they resumed living together - but in Dallas.

"We had a residency at Southern Methodist University," Wang said. "It was originally supposed to be about two weeks per semester, but because of COVID they extended it for the whole month of February. We decided, why not just stay in Dallas for the whole spring semester?"

So how did these four musicians manage to get along, not just musically, but also living together? How did they make it work?

"We've gotten pretty good at communication, that's key," Zawadiuk said. "Things build up, and then we just sit down over a beer and have a chat."

"We've found that it helps when we set goals for ourselves, because that pulls us together and unites us," Zhou said. "Then we can all funnel our efforts into achieving that goal, instead of having all this extra energy directed at, 'You're in the kitchen again, I need to cook and now I'm upset!'"

"We're very lucky that in Salt Lake, the Salt Lake Chamber Music Society knew we were there, and they organized a couple of concerts for us, house concerts," Zhou said. "So that gave us something to work toward. It was a similar situation in Dallas with the SMU residency - that really helped us stay together."

"Another aspect of what helps everyone stay sane is just giving each other space when we need it," Wang said. "That was important. In Salt Lake especially, three of us had a car. Aiden could go hiking, we could all go out when we needed to. To have a life outside of the quartet as well, that really helps."

This fall the quartet starts a new chapter.

"Next week, all of us are moving to Philadelphia because we're starting our graduate quartet residency at the Curtis Institute of Music," Wang said. "We are really excited to make that big move to the East Coast and to work with the Dover Quartet and the other faculty."

"In terms of concerts, we still have support from the Banff Center and some tours coming up," Wang said. "We're happy that we signed with Opus 3 just this past semester, so we're looking forward to having management and to performing as much as possible."

August 2, 2021 at 10:50 AM · This is lovely. Thanks for including the performance. They sound solid together and it is a lovely piece for them to perform.

The photo of them radiates joy.