July 19, 2021, 5:39 PM · Los Angeles violinist Vijay Gupta has a way of using his considerable talents to promote other kinds of change in the world, rather than to promote himself. So when I learned he would be giving a little concert to celebrate the release his new recording, When the Violin, I knew this would be no ordinary event.

I was right - Gupta used the occasion to inaugurate a newly-created performance and common space at an affordable housing project, the Paul Williams Apartments in Historic South Central Los Angeles. 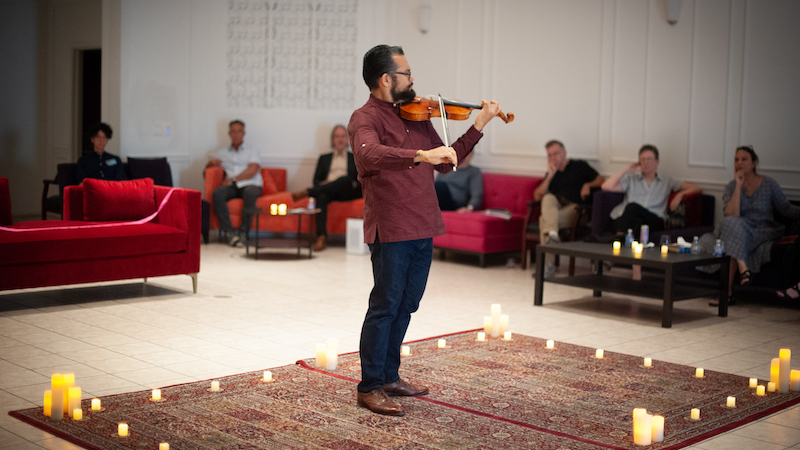 This fall, that space (formerly the Angelus Funeral Home) as well as a new 5,000 square-foot ground floor complex at the next-door Florence Mills Apartments, will open as a music and media arts facility for the surrounding community, providing tuition-free music instruction and access to technology and recording labs, through the Young Musicians Foundation and Hollywood Community Housing Corporation. As part of this new program, Gupta will curate a concert and workshop series for the community, which includes low and very-low income residents.

In introducing Gupta on Friday, Young Musicians Foundation Executive Director Walter Zooi said, "Vijay brought the music down off the hill and into the community."

For a little background: Gupta played for more than 10 years in the first violin section of the Los Angeles Philharmonic, having joined in 2007 as the orchestra's youngest member, at age 19. Shortly after joining the orchestra, Gupta started giving violin lessons to Nathaniel Ayers, the Juilliard-trained violinist whose spiral into mental illness and homelessness became the subject of a series of Los Angeles Times columns by Steve Lopez. Those columns inspired a book, then a movie called The Soloist.

Gupta became deeply interested in advocacy and issues of homelessness, poverty and incarceration. In 2011 he co-founded Street Symphony, a nonprofit organization which pools the talents of local musicians to provide live concerts at shelters, county jails, and treatment and transitional housing facilities. In 2018, after receiving a MacArthur fellowship (aka "Genius Grant"), Gupta chose to give up his position in the LA Phil to focus his efforts fully on social justice work and Street Symphony.

On Friday, Gupta performed from the center of the room, on a carpet lined with candles, while the audience of community members and supporters surrounded him on couches. Gupta played against a backdrop of street sounds, the outside world still softly audible.

His performance, as well as his new recording, included three pieces for solo violin: "When the Violin" by Reena Esmail; "Lachen Verlernt" by Esa-Pekka Salonen; and the Sonata in G major by J.S. Bach.

For those who followed Violinist.com and Gil Shaham's Gilharmonic project last summer, you might remember "When the Violin" from Gilharmonic on Violinist.com Episode 8, which featured Gupta as our special guest. In a nutshell: as soon as we heard it last summer, Gil and I went crazy for this piece, and Vijay's performance of it. Gil immediately bought the music (you can get it here) and has added it to his repertoire.

It's a haunting piece, inspired by a poem called "When the Violin" by the 14th-century Persian poet named Hafiz. At its musical core is the Hindustani raga, Charukeshi. And the piece's accomplished composer Reena Esmail also happens to be Gupta's wife.

What a treat, to finally hear it played live and to be mesmerized by this music alongside a roomful of silent and attentive listeners. I was fascinated by the way Gupta used vibrato - his is already so varied, and then he added the Indian-style decoration that is kind of an over-vibrato. Playing on his Benning violin, Gupta also used a Baroque bow throughout the performance.

Salonen's "Lachen Verlent" was inspired by a quotation from Schoenberg's "Pierrot Lunaire" -- the narrator has forgotten how to laugh, and she begs Pierrot to help her learn to laugh again. "I felt that this is a very moving metaphor of a performer: a serious clown trying to help the audience to connect with emotions they have lost, or believe they have lost," Gupta wrote in the program notes.

It's also a pretty good metaphor for our desire to reconnect with our fellow humans as well as our emotions, following a pandemic that brought so much isolation and disruption.

The music itself was gripping and beautiful, but dark. Did she learn to laugh again? I'm not confident she did. If so, it was some wicked-fast, manic laughter, with moments of spooky-raspy sul ponticello playing (reference to Schoenberg's "sprechtstimme"?), plus lots of double-stops and string crossings. A great performance.

Gupta concluded by playing the first movement of Bach's Sonata in G minor - savoring every note always hitting the perfect resonance. With candles all around, plus the awareness that the Paul Williams Community Room was formerly a funeral parlor, this began to feel like a seance. What spirits were haunting the room? It had such good acoustics, I could even hear Gupta breathing.

Following the performance, Gupta retired with his violin to a couch in the middle of the room for a "community circle" discussion, led by Gail Eichenthal, of the LA classical radio station KUSC. 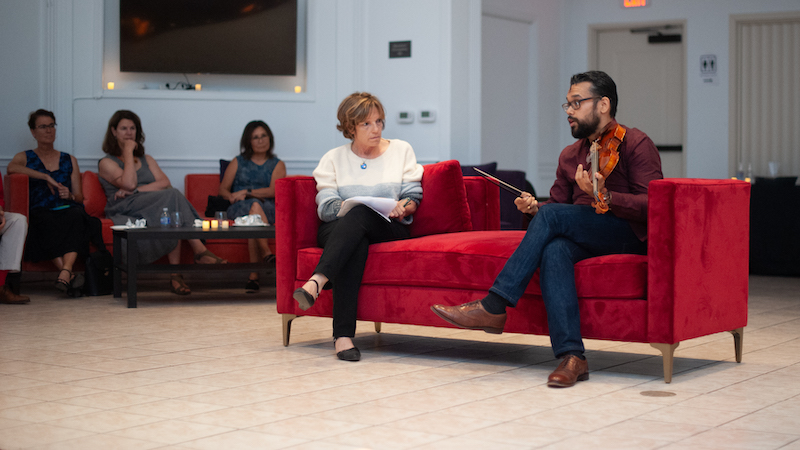 She first asked, "Why did so many musicians turn to the music of Bach during the pandemic?"

A good question -- for the violinist, violist or cellist, it might be the fact that Bach wrote such thoroughly complete and satisfying solo works for those instruments, between the Sonatas and Partitas for solo violin ("Sei Soli") and the Suites for solo cello.

But the answer probably lies deeper than that -- it has to do with Bach's genius. Eichenthal quoted musicologist Nicolas Slonimsky, who said Bach is the "supreme arbiter and lawgiver of music."

Gupta said that he suspects that Bach never really meant for the "Sei Soli" for violin to be public, based on the fact they are so intensely personal and intimate, written following the death of Bach's first wife. When Gupta first played solo Bach, he found it to be both thrilling and daunting to play "music that was such an ecosystem unto itself."

More recently, during the pandemic Gupta started playing the solos straight from the manuscript, using a Baroque bow. In doing so, "something in the rhetoric of that music changed for me."

Gupta talked a little bit about what it was like to play at Disney Hall one day and then Skid Row the next - or sometimes both in the same day. He said that spending time in Skid Row "unveils the most fragile and vulnerable parts of ourselves." We ask, how could a place like this exist? We don't want to look at the fact of its existence. But meeting the people who live there, he saw a strength. "They refuse to take the entirety of their identity from the worst thing that ever happened to them," Gupta said. When he is performing for people who live on Skid Row, "I'm playing toward a kind of liberation."

With the new programs that he is creating with Street Symphony and Young Musicians Foundation, he said, "we intend to make music with this community, not at this community."

BELOW: At the end of the evening, Gupta led the audience through a version of "Take What You Need," a piece written by Esmail. It is a simplified version of a a piece for choir that was commissioned by Street Symphony. While it has been performed a few times in traditional concert halls, "most performances have taken place in jails, homeless shelters, support groups, schools, memorial services, places of worship — in places where people can gather to see and honor the humanity in one another." It's full of encouragement and hope -- a meditation for anyone who could use a bit of that:

If you want to purchase Gupta's new recording, "When the Violin," please click here.