Most of us would have to say "no," but Chicago-based violinist Rachel Barton Pine was ready to answer in the affirmative when the Ravinia Festival called her late Friday to perform Prokofiev’s Violin Concerto No. 1 with the Chicago Symphony Orchestra and conductor Marin Alsop - that very night. 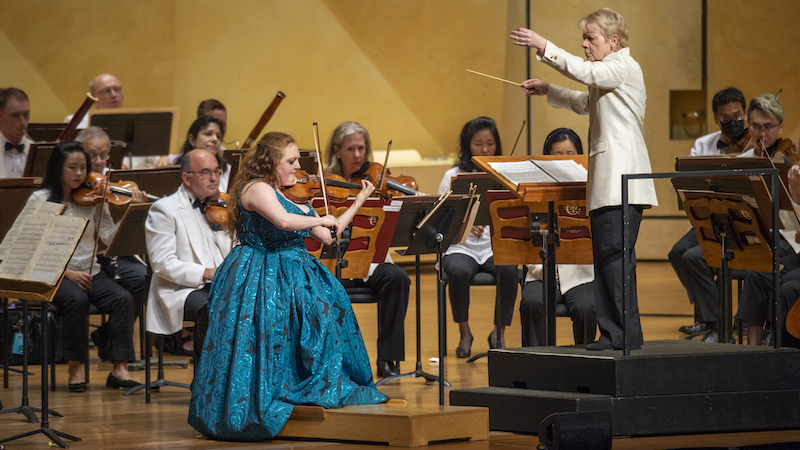 Rachel was filling in for violinist Midori, recent Kennedy Center Honoree who had withdrawn from the Friday performance due to illness, according to the Ravinia Facebook page. (We send Midori our best and hope she is feeling better soon.)

The orchestra had already rehearsed with Midori, and there was actually no time before the performance to have a formal rehearsal with Rachel, who was dashing to Ravinia in her car when she posted to Instagram that she was "...studying Prokofiev 1 as I drive to go perform with @marinalsop.conductor and @chicagosymphony on 3.5 hours notice!" 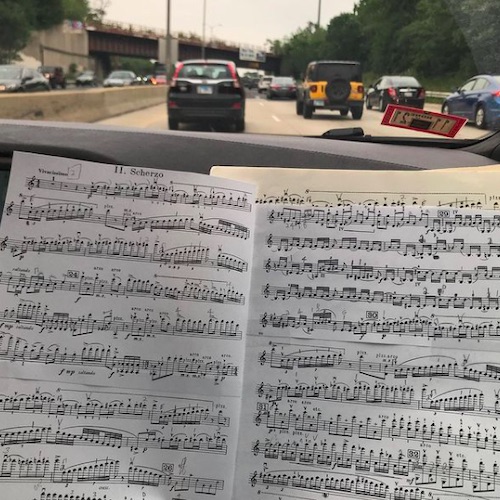 One reason Rachel was prepared for this moment - beyond her high level of training, experience and long devotion to the instrument - was her pandemic project, 24 in 24: Concertos from the Inside. For that project, she performed 24 different violin concertos, live and unaccompanied, over 24 weeks from January through June 2021 - performing from her living room.

Prokofiev's first violin concerto happened to be featured on Week 9 in March. It's a piece she said she's been playing for some three decades, and among other things she tells a fascinating history of its early 20th-century premiere, which was delayed due to the Russian Revolution.

This was the second time this year that Rachel has filled in at the last minute - on March 12, she stepped in for violinist Baiba Skride when the Latvian violinist was unable to travel to Michigan for a Detroit Symphony Orchestra digital concert with conductor Domingo Hindoyan. For that, Rachel played a streamed performance of Mozart Violin Concerto No. 1 in B-flat major, K. 207. While Mozart 1 wasn't part of her 24 in 24 show, she had it in her repertoire, having recorded the piece in 2015 for her Complete Mozart Concertos recording with the Academy of St Martin in the Fields and Sir Neville Marriner.

Rachel will play again at Ravinia this season on Sept 7 in a concert called Lara Downes: Rising Sun.

July 18, 2021 at 10:42 PM · Well if anyone could do it, it would be...Rachel Barton Pine! I'm starting to collect her CD's, latest for me is Violin Concertos by Black Composers; also I've been much enjoying her Complete Concertos for Viola D'Amore by Vivaldi. Her "Instrument of the Devil" CD has knocked out a few of my rocker friends, and her "Solo Baroque" is quite lovely --and includes the gorgeous Biber "Passacaglia in G minor", the Elicia Silverstein rendition of which was so recently under discussion here on Violinist.com. One of my baroque-style violin bows is marketed by Shar as approved by...Rachel Barton Pine! I won't have another violin lesson until next month, because my teacher is away for violin studies that includes a master class with...Rachel Barton Pine! Usually my favorite musicians are those who I've seen and heard play live, but lately I'm slipping into fandom for a violinist I know only as a recording artist...Rachel Barton Pine!

“ I want to let you know that I had a sudden, urgent condition on Friday that resulted in severe pain, just hours before the concert at Ravinia. Once diagnosed and treated in the hospital the issue was completely resolved. I am heartbroken about having missed the concert with the Chicago Symphony on Friday-- which I was so looking forward to.

I am happy to report that I am feeling much better and ready to get back to making music.

So glad she is feeling better!

July 19, 2021 at 11:46 PM · This article inspired me and I am so grateful that Midori is well AND that we have such a person amongst us who can step in as Rachel Barton Pine did. We all fill in as we can, and the practice it must have been to step in like that has me now practicing more and focused. I will never be called to perform like this but I am going to be ready.

July 20, 2021 at 06:04 PM · Impressed that RBP has Mozart 1 in her repertoire - My father thought it unlikely to be performed, and, therefore, fair game for his school orchestra adaptations (He had previously transcribed it for viola, still in B-flat - I have that transcription).

What cadenza does she use? Her own? I think Joachim & Kreisler only did cadenzas for 3-5.