June 27, 2021, 3:40 AM · When Los Angeles Chamber Orchestra Concertmaster Margaret Batjer took the stage at Walt Disney Concert Hall Saturday, she dramatically removed her black mask and cast it aside, beaming as she bowed to a full audience, which applauded vigorously.

The moment felt especially triumphant: it was LACO's first live concert since the start of the pandemic in March 2020, and it also marked the reopening of Los Angeles' iconic Disney Hall for live performances. 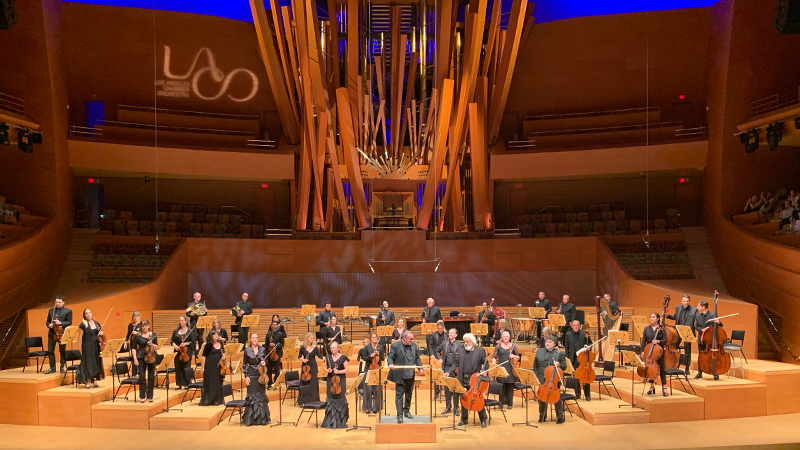 Before the performance, concert-goers gathered in front of the hall, waiting to show proof of vaccination to get in. It had the feeling of an informal reunion. Old friends hugged -- with some hesitancy after so much time "social distancing."

Without masks, people saw full faces and recognized friends, trading stories and asking after each other. I was happy to reunite with some fellow violinists, students, journalists and community friends, and even to meet a few new people and hear some new stories. I met LACO's new Executive Director Ben Cadwallader, whose first day on the job was March 9, 2020. 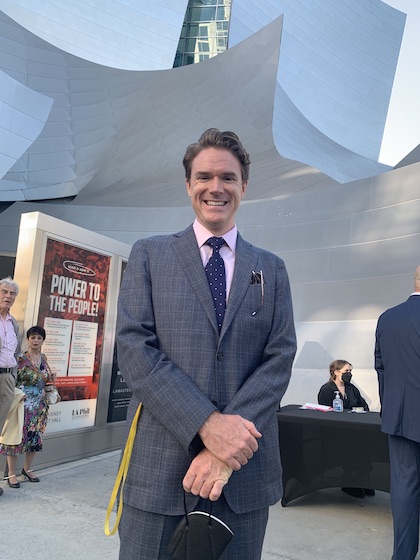 What a year to begin, but as he said from the stage before the concert, "We made it!"

Of course all this hopeful activity took place alongside signs of COVID's losses. The large LA Phil posters at the entrance to Disney Hall served as a reminder that this venue was vacated suddenly, and that it has stood dormant for more than a year. 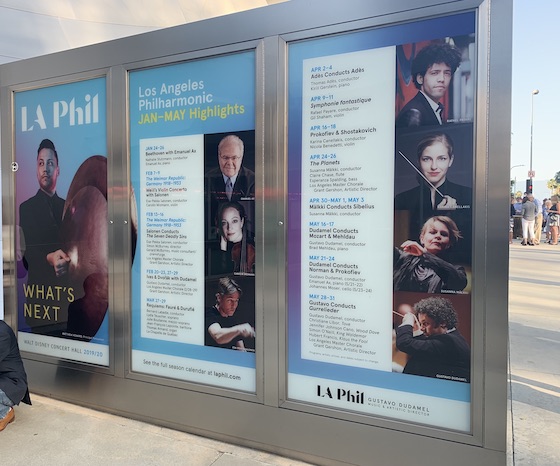 "What's Next - Walt Disney Concert Hall 2019/2020," reads one poster, with the others advertising concert highlights for January through May 2020. Painful, the concerts that never happened.

Stepping inside, Disney Hall had the feeling of a place that has been asleep and is just barely ready to wake up. The escalators haven't been in constant motion since March 2020, have they? And surely not too many people have been walking on this carpet, or sitting on these benches, or using these restrooms. But here they come... 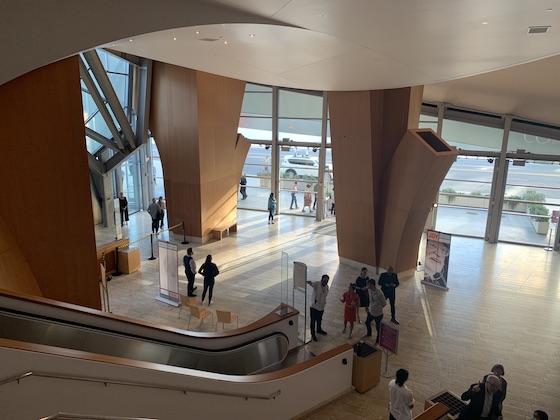 As I sat down in the audience of about 800 people, I overheard someone in front of me exclaim to a friend, "I'm very excited, this is my first concert since the pandemic!" California only officially re-opened on June 15, so this was likely the case for many in attendance.

The orchestra assembled on stage, with one person to a music stand. As described before, Batjer discarded her mask with style and then tuned the orchestra. The audience applauded even louder when conductor Jaime Martín took the stage - so much applause, before the orchestra had even played a note! 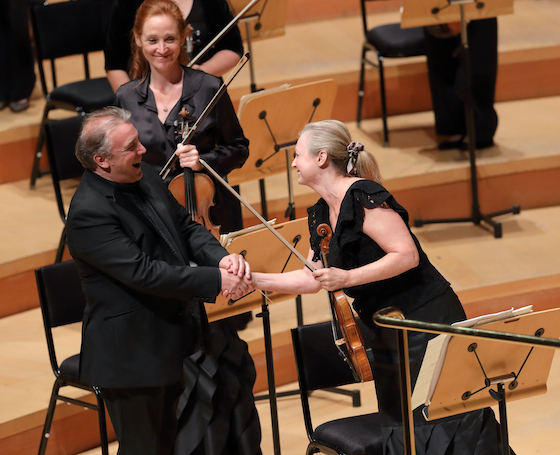 But something even better than applause happened when Martín raised his baton: silence. I'd forgotten the visceral magic of a silence that hundreds of people willingly enter together. Here it was.

LACO's Andrew Shulman gently broke that silence with a quiet and captivating cello solo, played with harpist Elisabeth Zosseder at the beginning of Ginastera's "Variaciones concertantes." The piece unfolds with textures both thick and thin, with quiet moments and sections blasting with energy. What a nice way to wake up a hall, I thought.

Then I wondered, is a hall like a violin?

A violin needs to be played, in order to keep its voice strong. This concept sounds kooky at first, but it is widely accepted among violin players and makers: a violin, viola or cello needs those constant, in-tune vibrations in order to stay live-sounding and resonant. Left untouched for a long period, a stringed instrument will "shut down" in a noticeable way, and opening it back up will require playing it frequently.

Whether or not a hall can undergo a similar phenomenon, LACO filled Disney Hall with a lot of good vibes on Saturday.

After the Ginastera, LA-based composer Juan Pablo Contreras' 2016 piece "Mariachitlán" filled the air with sounds inspired by the mariachi music of his native Mexican state of Jalisco. The mariachi sound was certainly there from the beginning, as well as plenty of percussion, perhaps a slide whistle, and some great fiddling from Batjer while Zosseder actually knocked on the wood of her harp. At one point a whistle blew (police trying to stop the party, according to the program notes). The whistle made audience members laugh out loud. The party goes on despite it, with members of the orchestra reciting "Mariachitlán!" over and over as the music grows even more intense. Certainly music to vigorously awaken any sleeping hall!

The composer was in attendance, and he brought onto the stage for even more applause. 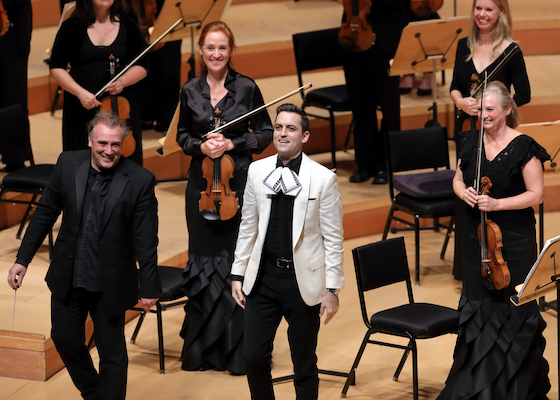 Mendelssohn's joyful "Italian" Symphony No. 4 followed, and the final movement stood out as the highlight. Martín took a very fast tempo that seemed on the edge of physics. No problem for the musicians in LACO, though - they nailed the fiendish passagework that permeates the entire movement, playing beautifully in sync.

This was to be the end of the concert, but it was not. Maestro Martín took the microphone to address the audience, and to specifically thank Los Angeles philanthropists Terri and Jerry Kohl, whose extraordinary generosity sustained LACO and many of the city's classical music institutions through the pandemic. 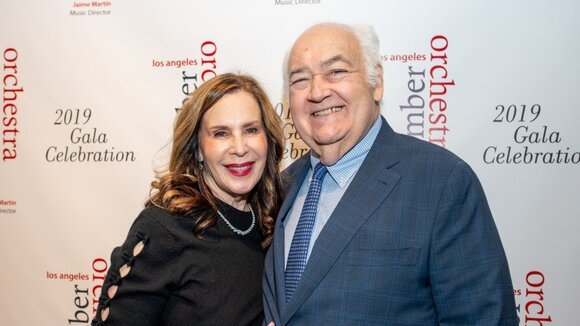 Knowing that Martín was a principal flutist for many years in orchestras all over London, Jerry Kohl had told the conductor he'd like to hear him play the flute.

"So I'm doing this just for him," Martín said, taking out his flute, "you all can listen, too." 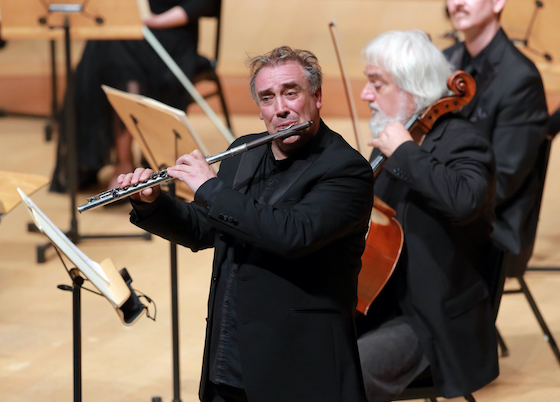 He was truly enchanting, like a piper from a children's story, turning to different parts of the audience and walking around as he played.

Afterwards, perhaps to break us out of the spell he had cast, Martín led the orchestra in an exuberant Spanish overture: "Intermedio de la Boda de Luis Alonzo," by Gerónimo Giménez. Martín's final gesture of the evening looked like the winning home-run swing of a baseball game. 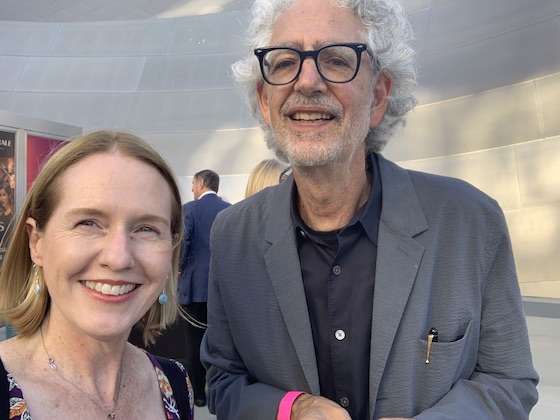