June 26, 2021, 1:59 AM · Violinist James Ehnes has grabbed the spotlight in so many ways: as a prolific soloist as well as recording artist, appearing with orchestras all over the world and accumulating a discography of 50 releases, winning numerous awards including two Grammys, 11 Junos and a Grammophone award. He's also a fellow of the Royal Society of Canada and a member of both the Order of Manitoba and the Order of Canada. A connoisseur of spiffy fiddles, he plays the 1715 “Marsick” Stradivarius. Growing up in Canada, he studied with Francis Chaplin, then with Sally Thomas at Juilliard.

What I didn't know about Ehnes is this: Wow, he's a wonderful teacher. That was my conclusion after the virtual master class he gave on Thursday at the Starling-DeLay Symposium on Violin Studies. It was the first time I'd seen him teach a master class, and his respectful and authentic engagement with each student was as inspiring as his deep insights on the musical and technical demands at hand. 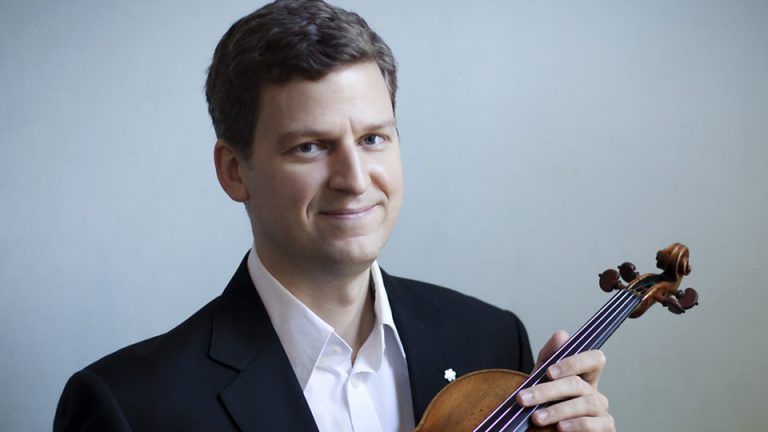 While offering a thorough and specific analysis of each student's playing, he kept things in perspective with comments such as, "That's a small problem for a person of your talent."

He offered a mix of poetry and practicality, as well as narrative insight. "I'm always thinking of music in terms of speech patterns, in terms of narrative, in terms of telling a story," he said.

Here are some highlights from his Symposium master class on Thursday.

The master class began with a solidly-executed performance of Eugene Ysaÿe's "Ballade" from Sonata No. 3, played by Michelle Stern, a Juilliard Pre-College student who studies with with Ann Setzer.

"You've really come to terms with how this piece works," Ehnes said, high praise from someone who just released a recording of the Ysaÿe Sonatas in February 2021. 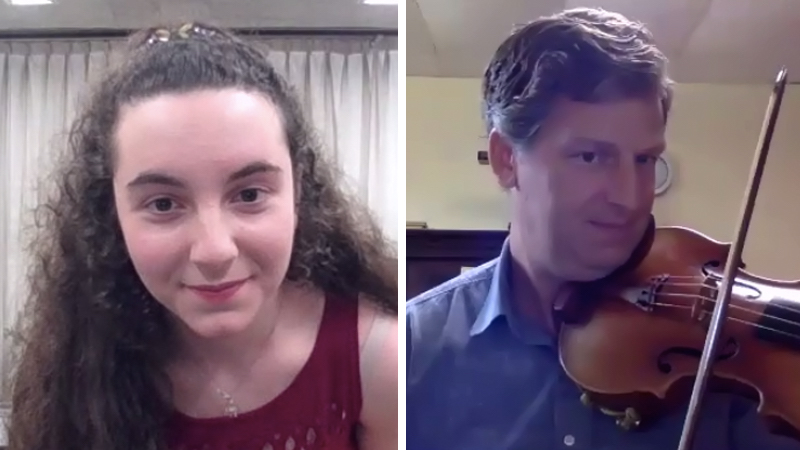 First, he focused on the opening of the piece. In narrative terms, "it's not a happy story," Ehnes said.

Ehnes first wanted to work with her on the dramatic pacing, and creating more emotional extremes in the music. "It's like a story that someone doesn't exactly want to tell." Then as the story unfolds it gets a little menacing, and the listener isn't exactly sure if she should have asked to hear it.

It all begins with a low A, held long.

When it finally starts moving, it begins like a nice A minor chord, but then it gets weird, with an outlier F, some spooky sixths... It starts to sound more like something "emerging from the mud." As it grows, its energy grows, and "the audience needs to get the excitement of this all building." As it moves higher and higher it needs more urgency in the vibrato.

After this introduction, arriving at the main theme in 3/8, Ehnes said that the triplets here should sound -- well, "triplet-y."

"Ysaÿe went to great pains to write out these awkward triplets, with dots," he said. If you play the first one too fast, it can sound like a grace note. "We need length on that first note of the triplet."

Later, on p. 3, he wanted it to sound more dreamy, "spin the sound," he said. "Create a sound that floats in the air" - not flautando, but a sound that releases the resonance.

After Michelle played Ysaÿe, she played another favorite from the repertoire: Nicolo Paganini's Caprice 24.

"This theme has been the ultimate earworm for 200 years," Ehnes said. "The magic of this theme is its simplicity," especially coming from a composer like Paganini, so famous for his elaborate virtuosity. "There is something very austere about this theme."

That said, the theme needs to be stated in a fairly simple way in the beginning to emphasize the mystery: how will Paganini create something elaborate and virtuosic out of something so simple?

Ehnes also went through specific variations and offered these observations and advice:

Next came the first movement of the Tchaikovsky Violin Concerto, played by Hana Mundiya, who has a Bachelor of Arts in comparative literature from Princeton and is pursuing a Master of Music degree at Juilliard, studying with Catherine Cho and Naoko Tanaka. 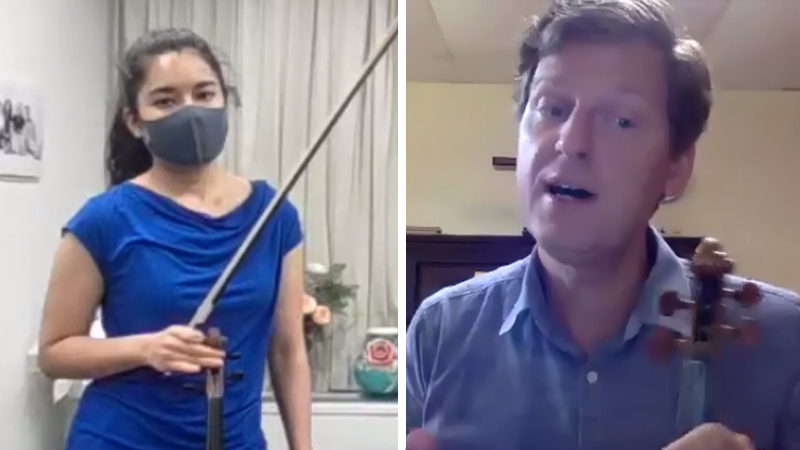 Ehnes had some thoughts on the opening for the solo violin: that after the introduction, the first notes of the Moderato assai can connect a little more to what came before." Particularly in the last measure before the Moderato assai:

The "A" should feel like it is truly on an offbeat, and then the last note of the measure, the G, should connect with the F# that follows as the first note in the next measure. To be honest, this idea made me do a double take; in every edition I have, the G and F# are separated not just by a double bar, but also they are on separate lines (I put them on the same line, above). The grace note also serves to separate them. Harmonically it makes sense to connect them, but in many years of playing I haven't thought of it that way!)

Of Tchaikovsky, Ehnes observed that he "wrote such beautiful music and people love it so instinctively, sometimes he's not given the credit he deserves."

Also, "if he does something once, he's definitely going to do it twice." In other words, the composer repeats things a lot - but the violinist has to find meaning in that. "If you take the time to say it twice, there has to be a re-emphasis, or a reflection: I had a good sandwich. I had a really good sandwich."

Ehnes, who has soloed with world-class orchestras across the globe, had some insights about playing with orchestra. For example, in this piece, for the runs (as at letter B), the soloist needs to play the lower parts extremely loudly, to be heard over the orchestra.

I loved the way Ehnes described this moment in the music, mm. 67-70:

It is like someone who has been running vigorously and stops, out of breath, still recovering, then having recovered is ready to move forward, and starts walking and breathing normally. "It has to be such a carefully paced transition," so the listener feels ready for the slower pace of the beautiful melody that follows.

He also warned about this passage:

"It can sound like an etude," he said, but it shouldn't. "It needs to be playful - a fun variation rather than a technical display, graceful, with a bit of freedom in the beat."

Next Joshua Song played the first movement of the Sibelius Violin Concerto, creating a really nice, full, resonant sound from his violin, with a beautiful, loose vibrato. That was the first thing Ehnes observed, "I loved your sound; I immediately thought: I want to listen to this." 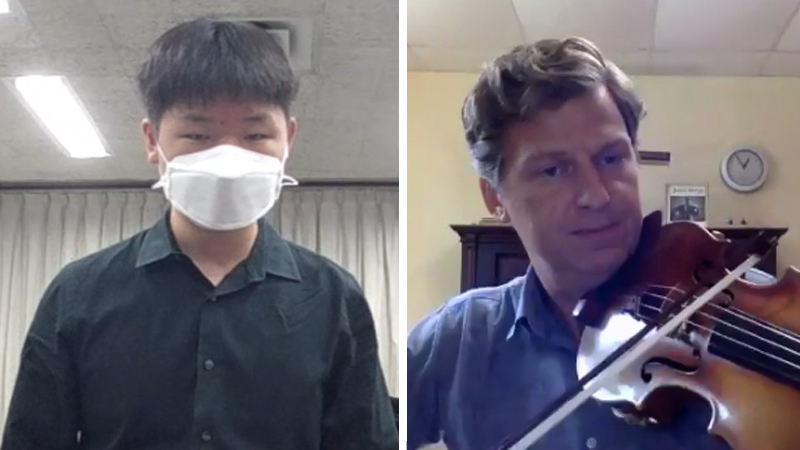 The opening of the Sibelius is very often described as a cold, snowy landscape -- in fact, I once heard it described that way at an outreach concert -- to a roomful of California public schoolchildren who mostly had never seen snow. (A show of hands proved it)

So I was happy to hear Ehnes use an imaginative metaphor that goes right to the heart of it (but without the snow!): "It's water that is moving," he said. "There are no waves, and you can't see the current, but you know the current is there."

The orchestra part here is murky, with the first violins playing the opposite pattern of the second violins. "Sometimes if I'm playing with orchestra, I just turn around and ask somebody at one of the front desks to play it articulate, so I know where we are!" The piano reduction isn't much better; different editions are inconsistent about whether the piano plays the first- or second-violin pattern, making it unpredictable as well.

He carried the water metaphor over, to the more lilting music at Figure 1:

"It's a feeling of an ocean with waves -- they crest at every bar," he said. "The break of the wave is on the head of the note," and the music surges.

"Part of the magic of Sibelius is the suspension of time," he said.

He talked about the Coda - the end of the movement, and how one must be prepared to play it fast. "The tempo of the coda, it's not up to you," he chuckled, "it's up to how mean the conductor decides to be to you!"

June 26, 2021 at 04:13 PM · Again, another wonderful summary! James Ehnes is a undoubtedly a great artist/teacher. Those young, talented students were most fortunate to have his keen attention and benefit from his insights, expertise, and kindness. Thank you, Laurie, for your efforts in writing up these summaries. I look forward to your summary of Pinchas Zukerman's master class!

June 27, 2021 at 09:26 PM · Definitely a great summary and I agree totally; it was a great class! I learned something valuable from every session in the series. Pinchas Zuckerman's master class was very mixed. There were some very questionable, insensitive, and ignorant cultural remarks which were completely unacceptable, and which Juilliard acted on immediately and properly, and which Mr. Zuckerman apologized for.

The plus side of his class was in his ability to hear and analyze the smallest nuances of every piece, then play them and show the corrections, and his ability to explain things in very easy to understand ways. Also his opinions on being honest, both musically and personally and his ideas of what the violin should be. I loved his statement "The violin is a singing instrument, not a string instrument". And last, his stories about growing up with Itzhak Perlman, and playing with or spending time with the other greats of the 20th century like Isaac Stern, Heifetz, and others were absolutely priceless. None of this excuses or mitigates his inappropriate behavior in any way though.

Let us hope that Mr. Zuckerman applies his stated beliefs about honesty to his comments and that we all recognize this type of behavior cannot be tolerated.