Injury Prevention for Violinists, with Pamela Frank and Howard Nelson

June 23, 2021, 10:46 PM · It's been nearly 10 years since concert violinist and Curtis-based pedagogue Pamela Frank found her violin-playing completely shut down by an injury that was causing severe pain in her neck and numbness in her hand.

Doctors said she needed neck fusion surgery; instead, she went to New York-based physical therapist Howard Nelson. He delved into the biomechanical and neuromuscular causes of her problems and helped her modify and retrain her movements. Two years later, she was completely back to playing. And to give it a storybook ending, Frank and Nelson got married! 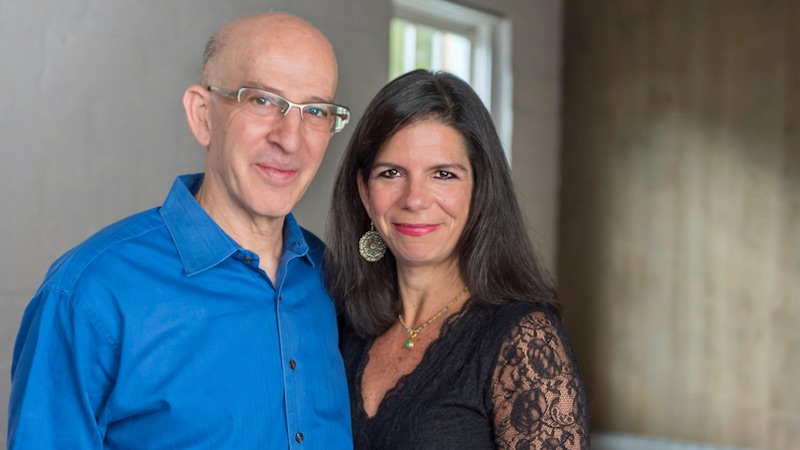 By now, a lot of people have heard their story -- in fact I wrote about it in 2018, after Pamela and Howard gave a lecture at the University of Southern California. But after the excellent talk they gave on Wednesday at the Starling-DeLay Symposium on Violin Studies, I'm happy to describe it again, especially considering the prevalence of injuries among violinists and Pamela and Howard's important mission to address that.

Since Pamela's recovery, the pair has combined forces to create a program called Fit as a Fiddle, and through their many lectures, residencies at universities as well as personal consultations, they have helped hundreds of musicians prevent, address and heal from the many performance injuries that are so endemic to violin-playing.

As they worked with students and Symposium participants on Wednesday, it was clear that Howard's knowledge of physiology combined with Pamela's eagle-eye for violin-playing mechanics allows them to diagnose performance injury problems and communicate about them in a unique and effective way.

Here are some highlights from their lecture Wednesday, as well as some general advice that they have for musicians.

What might be surprising to many musicians is the fact that many outside, non-violin activities can contribute to a performance injury.

"We all think that our problems come solely from playing, but what you do for the other 22 hours of the day can really make a difference," Pamela said. "Everyday activities add up."

For example, in Pamela's case, Howard discovered all kinds of daily habits that were contributing to her shoulder injury. For example, she had a habit of bending her head forward and left. Her shoulder was hiked up on a regular basis, causing mis-alignment even when she simply walked across the room. She was sleeping in a way that was causing strain. She also tended to throw her head forward and move it too much -- she was even shaking her head when washing her hair and brushing her teeth, and pushing her head forward to eat and drink, rather than bringing the food up to her mouth. This analysis went deep!

Howard pointed out that most people have habits that cause unnatural strain: hunching over a computer; arching our backs while sitting on an ill-fitting chair with our heels off the ground; leaning over a laptop placed on a low table; placing our phone or water on the ground, where we have to lean way over to retrieve it.

And of course, there is the playing. Our habits as violinists, violists, cellists or other instrumentalists can certainly cause injury.

For Pamela, she tended to stare at her left hand while playing, causing her to turn her head all the time. To heal, she had to completely re-train herself to keep her head forward while playing. "Many of us stare at the left hand," she said, but there is no need to do so. "Playing is by feeling and hearing; you're not doing anything by looking. A lot of it is about trust. It was different, but I learned how to do it."

"Make your environment adapt to you - you have to customize your set-up to your anatomy," Pamela said. "Use the least amount of muscle tension for what you are doing.

It took Pamela six months to even begin to feel better; a year to start playing again, and a year and a half to really return to full-time playing. When you are making any changes to your physical habits and playing mechanics, "be really patient," Pamela said. "Don't try to speed up time. Real change takes time."

Learning the ergonomically "right" way to play is a slow process, and "under pressure and stress, you tend go back to what you know and what is familiar." You know that you've really made the change if, even under pressure, you can keep to your newer, better habits.

"You need to divorce your body from your music-making," Frank said. "I've had to learn to separate the two things." But how do you make the music exciting, while also keeping your own emotions, passion and excitement in check? Musical excitement is created with musical means: rhythm, timing, sound, bow speed, internal dynamics. A good movement pattern can both minimize injury while also actually improving your performance.

It's also important to set boundaries on your practice - marathon practice sessions with no breaks are a formula for injury. Instead, plan to practice in short bouts, with built-in breaks. Taking just a minute-long break every 20 to 30 minutes "diffuses any pressure or build-up in your body," Howard said.

Also, use your practice time efficiently - don't spend long hours spinning your wheels with the instrument up on your shoulder. Spending more time thinking and planning can allow you to maximize your progress during the time you do spend with the instrument.

Here is a summary of some of the things that Pamela and Howard suggested to help prevent and/or alleviate playing injuries:

It's the accumulation of small measures and actions that can make a big difference in staying well and preventing injury, Frank said. And when you discover a particular motion or habit that is causing injury, the treatment is quite simple: "Don't do that!"

June 24, 2021 at 06:18 PM · Great article Laurie! I really enjoyed this session and got a lot out of it, not just for playing but also changes to make while at my desk or other things; their idea of keeping your body neutral can be applied in so many ways. Pamela also had some great quotes; especially "Music happens from your eyes, to your brain, through your soul, and out your hands."; that was fantastic.

June 25, 2021 at 02:54 PM · I spoke very briefly with Ms Frank after a concert early last year (beautiful Bach sonatas, exquisite sound). I asked about my perception that she held the violin closer than most to her midline. She confirmed my impression and said it was part of her reconfiguration in response to her injury. She also mentioned some of what this article says. A most gracious person.