Appointed by CSO Music Director Riccardo Muti, she will begin her two-year tenure on September 1 and will continue through June 30, 2023.

"I'm thrilled to be appointed Artist-in-Residence of the Chicago Symphony Orchestra," Hahn said. "I have great admiration for the orchestra and Maestro Muti, and it is an honor to join their organization and be present in the city of Chicago over the next two seasons. Through the powerful conduit of the arts, a residency offers the chance to get to know a community and find ways to be helpful within it. I'm looking forward to exploring those connections and being of artistic service to the city of Chicago and its music lovers, and to making great music with the Chicago Symphony."

In the newly created position, Hahn will visit Chicago for multiple residencies each season. In December 2021, she will join the CSO for performances of Dvorák’s Violin Concerto, a work of special significance to the orchestra, which gave its U.S. premiere 130 years ago in October 1891. Next spring, she will perform a mixed recital program in the Symphony Center Presents Chamber Music series, and the coming season also sees her host two of her signature “Bring Your Own Baby (BYOB)” concerts. Providing a nurturing and welcoming environment for new parents to share their love of live classical music with their infants, these innovative free events will continue the CSO’s ongoing commitment to families with young children. 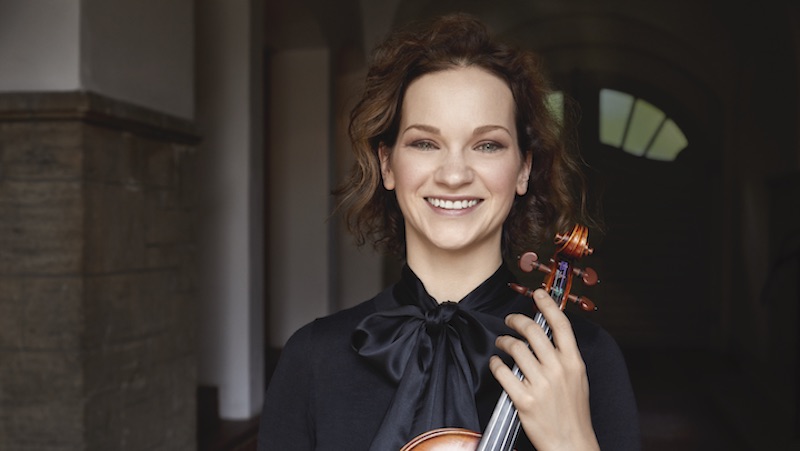 "The Chicago Symphony Orchestra is committed to collaborating with musicians who inspire audiences with their artistry and love of music," Muti said. "I am looking forward to the ways that Hilary Hahn will work with the orchestra as CSO Artist-in-Residence and I commend her dedication to sharing music in new ways with audiences around the world, especially at this time when culture can be a healing force for all of us.”

Hahn also will participate in a number of CSO education and outreach initiatives. In collaboration with the CSO’s Negaunee Music Institute, she will participate in projects with the Chicago Musical Pathways Initiative, which provides coaching, mentorship and support to young musicians from diverse backgrounds who plan to pursue professional careers in music, and Notes for Peace, which empowers Chicago families bereaved by gun violence to create original songs memorializing their loved ones.

Hahn made her first appearances at Chicago’s Orchestra Hall in February 2002, when she played Shostakovich’s First Violin Concerto with Riccardo Chailly and the Royal Concertgebouw Orchestra. Five years later she made her Chicago Symphony Orchestra debut with subscription concert performances of Goldmark’s Violin Concerto. Over the next decade, she returned to Chicago for a number of recitals as part of the Symphony Center Presents Chamber Music series. The second of these featured Hahn’s world premiere performances of the new works she commissioned for In 27 Pieces: the Hilary Hahn Encores, her Grammy-winning project to revitalize the encore genre. Most recently, she reunited with the CSO under Marin Alsop’s leadership for performances of Sibelius’s Violin Concerto in May 2019.

As CSO Artist-in-Residence, Hahn joins incoming CSO Mead Composer-in-Residence Jessie Montgomery, who begins her tenure on July 1, 2021, and will continue in the role through June 30, 2024.

June 24, 2021 at 12:25 AM · This is amazing. I collect records and CD's. I have hundreds of these things. To put this in perspective - from where I'm sitting - After all of my Bob Dylan CD's and records, and all of my Beatles CD's and records, I have Hilary Hahn CD's. She's a rock star with a fiddle. Well done, Hilary!