That felt like the quote of the day, from violinist Giora Schmidt in his master class that kicked off Juilliard's Starling-DeLay Symposium on Violin Studies on Monday. Like many things, the biennial event is being held virtually this year, with about 150 people tuning in from all over the United States as well as 14 countries around the world. 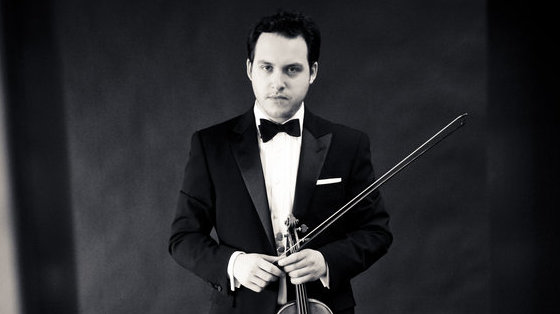 Of course what Schmidt said about Zoom applies to the his own master class as well - obviously, watching a master class over Zoom is not quite the same thing as traveling to New York and seeing it live at The Juilliard School, with the spirits of famous musicians haunting the halls and the buzz of Lincoln Hall and Manhattan right outside the front door. Personally, I've been attending the Symposium every two years since 2007, and I was a little skeptical Zoom would deliver same kind of motivation - as a teacher, I'm pretty Zoomed out!

But I have good news, I'm feeling very inspired, especially after watching Schmidt's master class. Schmidt is a soloist as well as an artist faculty member at NYU Steinhardt, having studied himself at Juilliard with Itzhak Perlman, Geoffrey Michaels, Patinka Kopec, and Dorothy DeLay, with additional guidance from Pinchas Zukerman. Even through the Coca-Cola can of Zoom, Schmidt delivered an inspiring array of thoughtful ideas, in a manner both wise and amusing, with vivid images and metaphors.

For the master class, each segment started with a pre-recorded performance by a student, after which the student interacted live with Schmidt.

First was a performance of the first movement of Bartók's Violin Concerto No. 2 by Juilliard pre-college student Iris Sung, 15, who studies with Masao Kawasaki. Iris's had a beautiful right- and left-hand set-up, and she had this piece extremely well in-hand. 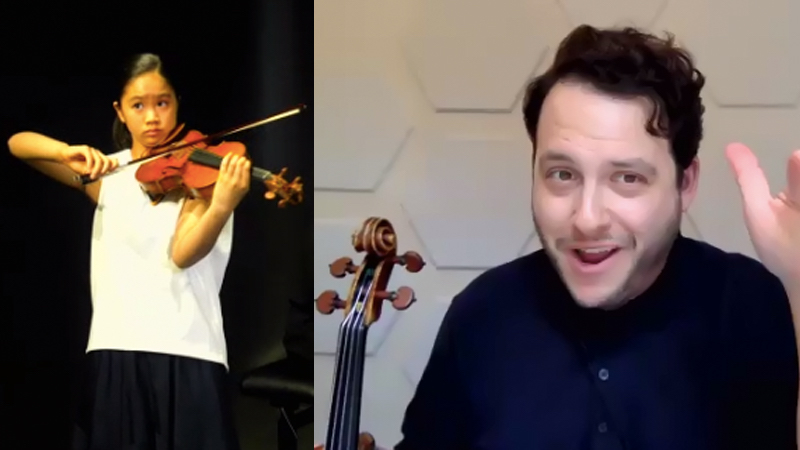 Schmidt wanted her to take that mastery of notes and dive a little deeper into the music, starting with adding more variation of vibrato, bow speed and pressure. He started with the bow, asking her to "try it with no vibrato at all -- do it with just the bow." He offered some imagery: "Imagine you are outlining a cloud in silver, with a pointed paintbrush. You don't have to fill in the cloud." She tried it with no vibrato, and then he asked her to "add just a pinch of vibrato, just a little color, just a little electricity in the outlet to charge the phone - you don't need to electrocute the phone."

After setting this particular tone, keep it that way "until later you POP it!"

"Sometimes it's okay to not drive the music all the time," he said. "Just let your hands move across the strings and let the music unfold naturally."

For a fast and scrubby part toward the end of the movement he had an effective way of asking her to use more bow: "Open the arm, open the hinge from the elbow a little more."

Of course, there were those Zoom moments during the master class; now and then he would try to snap to move the tempo along or interject - and as we've learned, those things all arrive several seconds later through the latency of the Internet.

Schmidt also talked also about the opening: "This is one of the few concertos that starts with the harp in the orchestra," he said. Though she was accompanied by piano - sensitively played by Hyunjin Cho - he asked her to imagine the strumming of a harp, and to create a sound quality that complements it.

"Create a sound quality that is a little more open, that mimics the harp's resonance," he said. Too many violinists "get carried away by the idea of blasting off on the G string" - but this opening needs something different. Instead of a tightly-wound vibrato and huge volume (it's marked f, not ff), use a looser vibrato, that pulses like that strumming harp.

Another place where he suggested a change in vibrato was a "poco allargando" - a place marked for getting slower and broader. "You can't broaden and have the oscillations remain exactly the same," he said. The vibrato needs to grow wider as the music broadens, then snap back to smaller and tighter with the faster tempo resumes.

Next was a change of pace, with Vibha Janakiraman playing the first movement "Allegro" from Mozart's Violin Concerto No. 4. Vibha is also a Juilliard Pre-College student, studying with Catherine Cho and Francesca DePasquale. (You might have heard her on From the Top, where in December she played "Darshan" by Reena Esmail - illustrating her connection to both Western and South Indian classical music).

Her Mozart was musical and flowing, with a variety of expression. As Schmidt put it, "beautiful playing - elegant and tasteful."

In fact, maybe a little too beautiful at times! 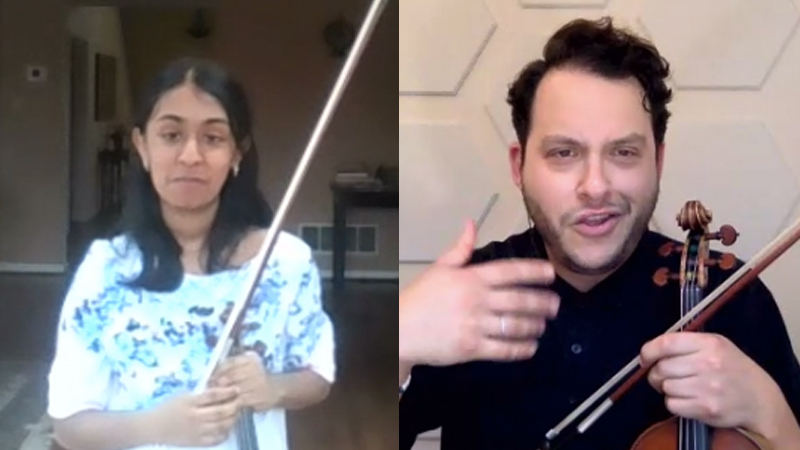 "In your effort to play beautifully all the time, you are sometimes distorting the rhythmic integrity," he said.

The opening can be a little more square, just let it happen.

"Keep it simple. You are falling prey to trying to over-beautify," Schmidt said. "Mozart made it beautiful enough - what we have to do is not spoil it.

It can be hard to believe that it's so simple -- "We just have to play in tune, with a nice sound and dynamic, that's it?"

He also suggested having checkpoints for the fingers, especially in 16th-note passages.

"Always start with clean beginnings," he said. The right-hand index finger can take responsibility, here. A little pressure, "a dab of glue at the beginning of a fast passage, it holds you for the whole thing."

Phrasing can also get tricky in Mozart. At a particular point he asked, "Do you want accents on each slur?" and she laughed, "No!"

He advised her to watch the phrase, to find a through-line and not to get caught up in the mechanics of executing each part of it.

"Find the simplest and most direct way to execute the phrase," he said, "listen, and your ears will guide your hands where to go."

After Mozart was Beethoven, with Grace Rosier playing the "Allegro con brio" from Sonata No. 7 in C minor with pianist Andrew Hsu. Originally from Eugene, Oregon, Rosier has been studying for four years with Ronald Copes at Juilliard and plans next to attend the Norwegian Academy of Music to study with Henning Kraggerud.

The Beethoven was a real delight, with well-placed articulation, dynamics and variety in phrasing. 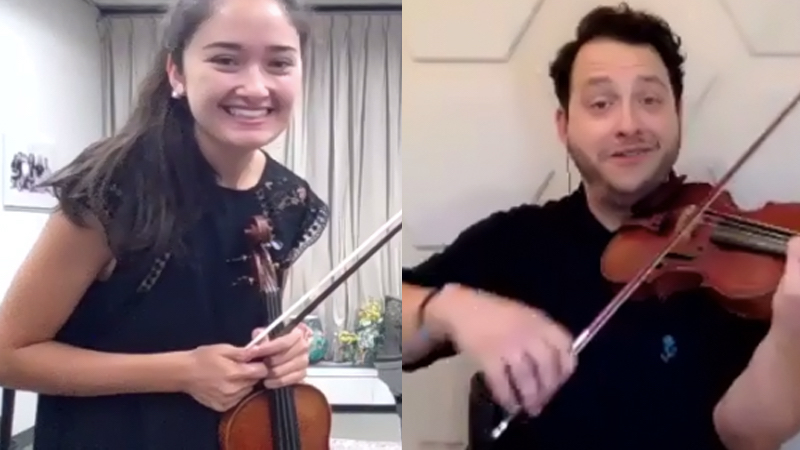 Schmidt started by talking about what makes Beethoven different from Mozart, Haydn or any other composer.

"The word that comes to mind," he said, "is shock! And that shock factor also has to be conveyed in the body."

Beethoven has a way of arranging the dynamics that shocks the listener, and he's also like the carpenter who has to go over everything again and again, to make sure that nail in the floorboard never comes out.

"As the performer, you need to own the fact that he is drilling this into our skulls to get his point across," Schmidt said.

A dynamic shock factor happens in m. 76 - a subito piano that is so sudden - "that passage needs to be uncomfortable in your body," he said.

The dynamics always can change on a dime, and for that reason, "bow efficiency is extremely important," Schmidt said. It is helpful to keep the bow in the place where it stops, rather than having the disruption and time inefficiency of, say, re-taking the bow to the tip.

For a passage at m. 38 marked "sempre staccato," Schmidt advised playing it martelé, at the tip, rather than off the string as Grace had been doing.

It's harder and takes more effort, but she had no trouble doing it that way.

"Practice that for three minutes a day and it will make you a better fiddle player!"

There was another passage where the sudden change from loud to quiet should feel uncomfortable, even in the performer, he said. "Imagine your ribs are in a corset and it's hard to breathe.." If your body is like spaghetti, you can't really convey that sense of discomfort and restriction.

However that should be a temporary feeling within a performance -- "turn off the tension after the passage is over," he said.

In sum, Schmidt recommended heightening the dynamic shock factor for Beethoven. "Your job is to be an actor, in a way," he said. Shoot that shock factor out to the audience, just like a T-shirt cannon would shoot T-shirts to fans at a ball game.

In just the first few sessions of Starling-DeLay, I enjoyed some exceptional teaching, dedicated student performances, and later in the day, a big dose of artistry from violinist Tessa Lark (more on that in another blog!). I'm looking forward to the rest of the week!

June 23, 2021 at 05:32 PM · Thank you, Laurie, for this wonderful overview! I took some notes, but yours are infinitely better. This masterclass alone was worth every single penny I paid to attend this symposium. Giora's teaching is nothing short of miraculous. He is a great artist/teacher, a rare combination. And to echo Caitlin Renner, I too look forward to more of your excellent summaries!

June 23, 2021 at 05:54 PM · Thanks Laurie. This summary is just about the best written description of musical instruction I've ever seen! I learned something simply reading it.