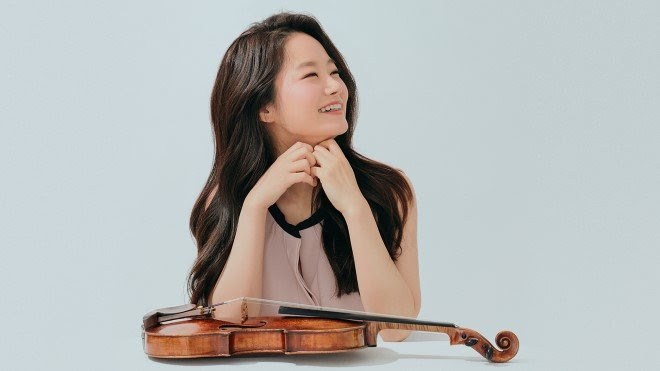 I was sitting in the audience for her Finals performance at the Montréal International Violin Competition, and she was performing the Shostakovich Violin Concerto No. 1 with the Orchestra Symphonique de Montréal, conducted by Giancarlo Guerrero. Here's what I wrote at the time:

The concerto begins with a spooky, aching first movement, full of harmonic tension. Kim was the steadfast violinist, trudging through this gloomy and haunted orchestra-scape, which does little to bolster the violinist along, unlike a piece such as the Tchaikovsky Concerto, which moves more in sympathy with the soloist.

The second movement, which Shostakovich characterized as "demonic," sounded like a dance through a mine field, possibly populated by evil clowns. It's wonderfully odd and off-kilter music, but you have to be sure of your footing if you're going to whirl through a mine field. Kim held nothing back, directing tremendous power into her playing and nailing any high-altitude intonation while she was at it. She was playing a 1774 Guadagnini. In the third movement Kim made perfectly-in-tune octave sequences seem like something that violinists do on a normal basis.

But the highlight of her performance (and perhaps of the night) was the third-movement cadenza. It's already a miracle of composition, but Kim made it come alive, creating the quiet and then creating the unrelenting storm, stretching the tension like a rubber band and keeping her live audience rapt and wound tight. People gasped aloud when she finished, and it had the feeling of a performance to remember.

Bomsori has been on a roll ever since then, growing in presence as a soloist with orchestras all over the world, including the New York Philharmonic in 2019, and steadily building a catalog of recordings. Before the pandemic, she had top-tier gigs on her calendar, including an appearance at the Hollywood Bowl. Of course, many of those performances were cancelled. But Bomsori, now based in Berlin, has hardly been sitting still. Earlier this year she signed an exclusive agreement with Deutsche Grammophon, and just this week she released a new album, Violin on Stage. Later this summer Bomsori will perform eight concerts as a Focus Artist at the Rheingau Music Festival 2021.

Bomsori, who spoke to me last week via Zoom, grew up in a household of music-lovers. Born in Daegu, South Korea, "my mother used to teach piano and my father used to play classical guitar as a hobby," Bomsori said. "They love music so much so they would turn on the symphonies by Beethoven or Mozart to wake me up. So I used to hate them because I wanted to sleep longer!"

They also attended many concerts, and the world changed for Bomsori when "I went to a concert by the legendary violinist Kyung-Wha Chung, when I was five," Bomsori said. "I was so touched - I clearly remember: at one moment, I cried because the sound she made was so direct and so emotional. I couldn't even bear it. My parents were very worried that I was sick during the concert! But I was actually just very moved by her sound. That is how I fell in love with this instrument. After that, I requested that they buy a violin for me. That's how I started."

After middle school and high school, Bomsori's family moved to Seoul so that she could study at Seoul National University with violinist Young Uck Kim, who is of the same generation as Kyung-Wha Chung.

"After my graduation in Korea, I went to the States, and I studied at Juilliard with Sylvia Rosenberg and Ronald Copes," Bomsori said. While she enjoyed her independence, being away from her family for the first time, she struggled with the language as well as the culture at Juilliard. She had lessons with multiple teachers who each offered different opinions about the same piece, "so I was kind of confused!" she said. "But I realized that they were asking me to find my own way."

Courageous enough to enter more than a dozen major violin competitions all over the world!

"The reason I did so many competitions was to have the chance to appear on stage for all those audiences," Bomsori said. "I did competitions in different countries in Europe, in the States, Canada, and also in Asia. Whenever I did a new competition, I was able to meet new people, new judges, new orchestras, new conductors and new competitors who are colleagues."

Competitions always require a demanding list of music. "In a limited time, you have to manage so much repertoire - and I wanted to have new repertoire every time," she said. "If you play the same thing again and again, it can be dangerous. You can get stuck. I always brought new final concertos, to challenge myself."

In fact, little did I know that the final concerto performance that impressed me so greatly in Montréal back in 2016 was actually the first time Bomsori had ever performed the Shostakovich concerto. It was also a crucial moment between Bomsori and conductor Giancarlo Guerrero, who conducts the NFM Wroclaw Philharmonic in Bomsori's new album.

"I met Giancarlo Guerrero in Montréal, at the competition, and we played the Shostakovich Concerto," Bomsori said. "I still remember the moment when I asked him, 'Who have you played this concerto with before?' and he said, 'This is my first time!' It was my first time to play that piece, too! It's a difficult concerto, and we got through it together, and we got closer."

Just a few months after winning second prize in Montreál, in October 2016, Bomsori participated in the Wieniawski International Violin Competition in Poznan, Poland, where she also was a second-prize laureate.

Her experience in Poland had a profound effect on her.

"I had never been to Poland before the Wieniawski Competition, that was my first time visiting," Bomsori said. "Since then, I have felt a strong connection to Poland, Polish music and Polish people. I think Polish people are similar to Korean -- we share this kind of difficult and sad history, both having been invaded by many strong countries. I don't know if it's because of that, but the personality and the character of people is very similar -- very passionate and very romantic."

In Poland, "I was particularly impressed by their love for classical music, because in the competition we felt tremendous support from the audience," Bomsori said, noting that every round of the competition was sold out, with people even standing in the back to listen. "Not every competition is like that - throughout the whole Wieniawski Competition, the audiences were all like that."

She also became even more enamored with Polish music. "So many great composers are from Poland -- not only Wieniawski and Chopin, but also Szymanowski, Paderewski, Penderecki, Weinberg - so many great composers! It's wonderful to discover this music. They are all very different and unique."

In fact, when she started to record, Bomsori immediately thought of Polish music.

Just before the pandemic, Bomsori had spent the beginning of 2020 touring the United States with Guerrero and the NFM Wroclaw Philharmonic, playing the Szymanowski Violin Concerto No. 1

"When I played the Szymanowski Concerto, I was impressed by how imaginative this music is," Bomsori said. "it's a great pleasure to get to know more about Polish music and Polish people."

The experience also made her feel very close with the NFM Wroclaw Philharmonic (the orchestra associated with Wroclaw's National Forum of Music), and it was with this same orchestra and Guerrero that she recorded "Violin on Stage," in December 2020, during the height of the pandemic.

"It was so dramatic," Bomsori said, of recording during the pandemic. "We were delayed three times because people became infected, so until the last minute we really didn't know if it was going to happen. Then we were super enthusiastic during the recording sessions because we didn't know if we would be going on, or if this would be the last day we could work. It was a great challenge for everyone to make this recording in such a limited time; we only had three days, and we got through all nine pieces."

Indeed, the album is ambitious in scope, showing off Bomsori's virtuosity as well as her compelling tone and musicality with showpieces, melodic pieces and even a few new arrangements. The album opens with Wieniawski's Polonaise de concert, Op. 4 - "I chose that to start the album because the Polonaise is always the first dance, the first music of any prom in Poland, any party, they always open the curtain with a Polonaise," Bomsori said.

The album includes favorites like Massenet's "Meditation from Thais," as well as showpieces like Waxman's "Carmen Fantasie" and Saint-Saëns' "Introduction et Rondo capriccioso" It also has plenty of Wieniawski, with "Légende" as well as the five-movement Fantasie on Gounod's "Faust."

"The Fantasie such a fascinating piece, especially with orchestra, because it captures all the characters in Faust's opera," Bomsori said. "Wieniawski was not only one of the greatest violinists, but he was a great composer. His music is so deep, and it makes the violin really sing. When I was young, I was afraid to play his music because I thought somehow it was too brilliant. It's very virtuosic, so I kind of feared playing his it, and I somehow felt his music was not so direct in my heart. But now I understand his music more and more. His music is not just about virtuosity or show-off technique, it's more about singing. It's coming from deeper inside."

There are three new arrangements on the new album by Vienna-based composer Michael Rot, written especially for Bomsori: the "Pas de deux" from Tchaikovsky’s ballet, The Nutcracker; "The Dance of the Blessed Spirits" from Gluck’s Orfeo ed Euridice; and “Mon cœur s’ouvre à ta voix” from Saint-Saëns’s Samson et Dalila, "my favorite aria, from a very early age," Bomsori said.

"I really wanted to have those arrangements, which were especially written for me," Bomsori said. "I wanted to follow the legacy of the Golden-Period violinists like Kogan, Oistrakh, Heifetz and Milstein," who created versions of opera and other music for violin that both challenged their own artistry and elevated the music to a different form.

She was very pleased that Rot was able to do exactly that. When she received his new arrangements, she immediately felt that they were "not only great arrangements of the music, but also great violin repertoire," Bomsori said. "If you didn't know that the music was from opera or ballet, you would think that these were complete violin pieces, with great cadenzas and great moments with the orchestra."