V.com weekend vote: What scale system do you use? 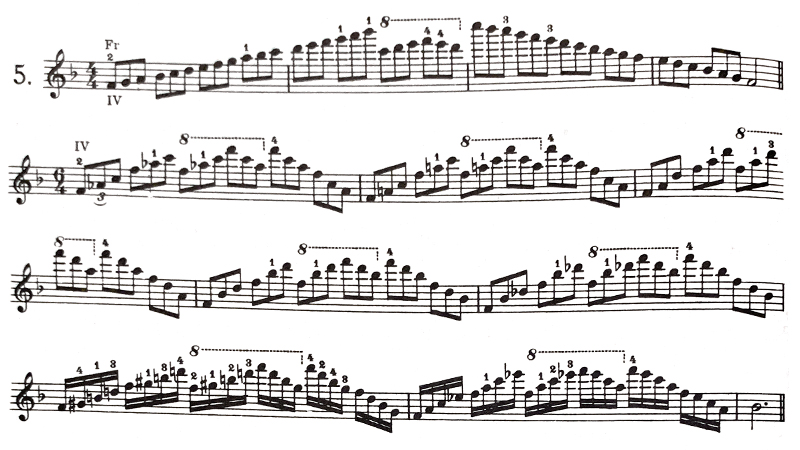 Lately the violin world seems to have been hit with an abundance of riches, when it comes to scale books: Several weeks ago LA Phil First Associate Concertmaster Nathan Cole announced that he was releasing a new scale book called Scales: the Road to Repertoire. Then just yesterday Mark Rush posted a blog on Violinist.com about his new book, Carl Flesch Distilled: A User-Friendly Approach to the Flesch Scale System.

And then by contrast, in our latest interview with violinist Vadim Gluzman, he admitted that he actually was not a fan of scales, that in fact his childhood teacher excused him from playing scales, allowing him to play excerpts from pieces like the Beethoven Concerto instead. This certainly seemed to work for him!

Personally, I practice, teach, and preach scales. I use the Galamian scale system, primarily because I was raised with it (thanks Jim Maurer, Gerardo Ribeiro and Conny Kiradjieff.) I find that scales work wonders not only for facility and intonation, but consistent practice of scales also help one's physical fitness and longevity on the violin. If I have time to do just one thing on the violin on a given day, I'll play a round of three-octave scales.

There are merits to many different scale systems, and I would be interested in hearing about which systems you are using and how they work for you. That is, if you play scales! Have you used the same scale system for many years? Are you just learning scales now? Do you practice scales consistently? Or do you find them not to be useful? Have you tried many different systems or pretty much stuck to one? Please choose the best answer for you in the vote, and then tell us about your experiences with scales. (If you pick "something else," please tell us about it in the comments!)

May 15, 2021 at 08:25 AM · I was brought up on the Flesch system. Later, with a new teacher, I learned Sevcik too, but with different fingerings. Now I use Sevcik (memorized) for three octave scales, and Flesch for the double stops.

May 15, 2021 at 11:07 AM · +1 for Barbara Barber, usually matching the key of the piece I’m learning/practicing. However, more focused on etudes and Fischer’s Basics lately.

May 15, 2021 at 11:39 AM · A combination. I've used Flesch, Schradieck, Hrimaly, and Galamian. These days, I prefer Galamian acceleration scales. Side note: Before doing any scales, I have a 20-minute warm-up routine I go through for bow arm and left hand. Scales are a lot easier for me after this start-up phase of practice sessions. I have fun with scales, too, and don't regard them as a chore.

May 15, 2021 at 02:40 PM · I have a book by Ferdinando Dalmasso which my third teacher recommended as short enough and focussed enough to suit amateurs well (unlike Flesch for example).

It is not strictly a scale book; it begins with Schradieck-like exercises, proceeds to a section designed to strengthen the fourth finger, then to "scales and scale based exercises".

Scales are boring. Practicing scales is a matter of discipline. Alas, I am not very disciplined. (I want to work on music. I work on technique only for that aim.) Even so I use these exercises more or less regularly (I find the fourth-finger section useful too).

Inspired by a thread on scales I recently tried to find a copy of this book on sale (just to see if it was still in print). It seems clear that it is no longer available. Moreover googling the name Ferdinando Dalmasso yields a small number of living individuals with this name but no violin-related stuff. Googling "Ferdinando Dalmasso violin" finds the book and very scant info on Dalmasso (mainly the unsurprising fact that he was an Italian violinist). He and his books appear to have been completely forgotten. I don't think they deserve such harsh treatment.

May 15, 2021 at 03:36 PM · I use a combination of systems. I was introduced to the Flesch system in high school, a quasi Galamian system in my undergraduate studies, and as of late, Hrimaly, Ruggiero Ricci's drone scales, 4 octave scales, and scales starting at the top, somewhere in the middle, and/or start the scales with the 2nd, 3rd, or 4th finger (an outside the box approach). In practicing scales, I realized by accident that I can do left hand pizzicato as I was checking bowed top notes while plucking its respective open string. And so, I can practice fun stuff like Variation II (Poco piu lento) from Wieniawski's Variations on an Original Theme, Op. 15. In all, scales and arpeggios have helped me to grow as an amateur musician.

May 16, 2021 at 06:45 AM · First Hrimaly, then Galamian which I used for many years. I was introduced to the Flesch arpeggio sequence last year, and I like it a lot, so I now use Galamian for scales and Flesch for arpeggios.

Kennedy Becky, for a self teaching violinist Julia Bushkova is pretty much the best thing on the Internet right now. If you check out this link

You can find two octave scales with no shifting than will teach you the layout out of the fingerboard really well.

May 16, 2021 at 01:20 PM · I was introduced to the Galamian books by Dorothy Delay. Her analytical approach inspired me to develop my own concept of the scale as "laboratory", using the scale to add technical control elements, one by one, toward the goal of streamlining one's default technical approach. The Galamian book is a treasure when one systematically delves into part two (the variations).

I also like the Heifetz Scale System edited by his star pupil, Endre Granat. And I enjoy the last six pages of 3 octave scales and arpeggios from Hrimaly. I find playing scales very calming and soothing. Just like praying the Rosary. And I feel and play so much better when I'm done!

I actually already know the Ab major pattern in first position, but I never actually considered using it to play scales in other positions, and that's because I'm very scared of venturing into other positions.

To be honest, higher positions have always seemed like some special area reserved for advanced players. It looks like I might have to correct this mentality.

May 16, 2021 at 04:44 PM · Alexander, I feel the same way about scales as you do. Like the rosary and the liturgical year, with each evolution it isn't a circle, it's a screw that digs deeper and deeper into the mystery.

Wicked idea, substitute for scales and arpeggios; learn the Beethoven concerto, then transposes it up and down a half-step.