March 25, 2021, 3:18 PM · Compositions by black composers that have been long overlooked are now coming to the fore, as orchestras grow more assertive about including such works in their regular season's offerings.

Here's a great chance to hear an excellent performance as well as an excellent such work - and for free: BELOW: violinist Gil Shaham performs Joseph Boulogne's Concerto No. 9 in G major, Op. 8 with the Los Angeles Chamber Orchestra. Click to watch the video, which was premiered on Friday night:

Concerto No. 9, Op. 8 is virtuosic in the Classical style, Shaham comparing the technical level to a Haydn or Mozart concerto, perhaps between Haydn's G major and C major concerti.

"There is plenty of impressive passagework for the violin - bariolage and other techniques," Shaham said. "He hits those high notes that the longer fingerboard (new at the time) allowed violinists to do. So he definitely pushed the violin - but I think most importantly: the way he writes makes the violin sing. That is what I always love."

When Shaham first learned last summer that he would be performing Boulogne's Concerto No. 9 with LACO, he had not played it before. He had played a quartet by Boulogne, but not a concerto. He went into research mode and did some marathon listening, taking in many of Boulogne's violin concerti. "This concerto is the ninth in this opus, and there are other opuses. He left many violin concertos," Shaham said. "It was actually the second movement of this concerto that just grabbed me. It's a very beautiful, very poignant Largo. My first reaction was, 'I have to play this, I can't wait to play this.'" 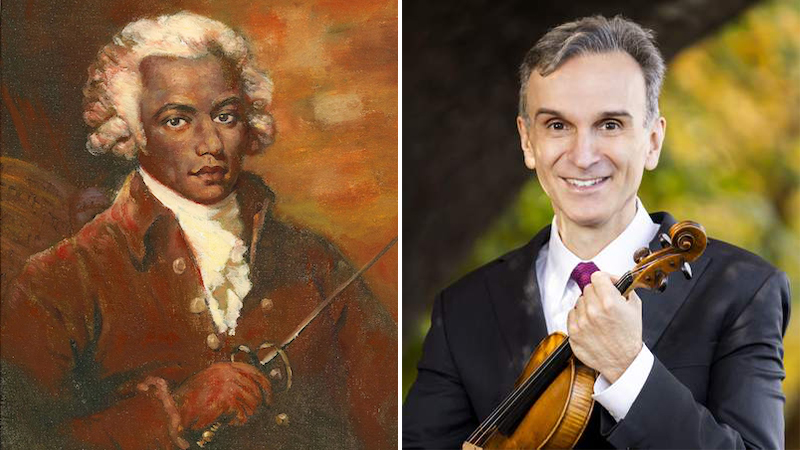 Joseph Boulogne, le Chevalier de Saint-Georges (1745 - 1799) has been called "Le Mozart Noir" or "the Black Mozart," though this term by now has been largely set aside, owing to the fact that Boulogne was a man of his own unique accomplishments. Boulogne was in fact very accomplished in music and beyond - his biography is remarkable. Born in the French Caribbean island colony of Guadaloupe, he was the son of George Bologne de Saint-Georges, a wealthy plantation owner, and Anne dite Nanon, his wife's African slave. When he was 10, he moved with his father's family as well as his mother to Paris, where he was given an aristocratic upbringing and advanced education. Not only was he a virtuoso violinist and composer, he was also a champion fencer, accomplished rider, and a colonel in the French army.

"As a composer, he was a clearly an expert craftsman," Shaham said. "The harmonies, the counterpoint, the orchestration - everything works out just right. There are never any balance issues because the registers are perfectly worked out for the soloists and for the other parts. And it makes the violin sing - it's a perfect vehicle for a violinist."

This made me personally curious about this specific concerto-- so I gave it a little read myself. I found it delightful and playable - with some nice juicy passagework to make things interesting (and require practice!) The sheet music is not as widely available as a Haydn or Mozart concerto (hopefully this will change), but you can order an edition online from Artaria Editions, which also carries editions of the composer's quartets, sonatas, symphonie concertantes, symphonies, and numerous other concerti for violin by Boulogne.

"It was my first time working with LACO - I was honored and happy," Shaham said. "Everybody was happy to be making music, especially considering the year we've all gone through. A lot of them felt, as I did, that this concerto a great discovery. In fact, (concertmaster) Margaret (Batjer) said, 'Oh, I want to play this piece! When can I play this piece?' A lot of the reactions from the musicians were the same; people were saying, 'I really dig this piece and I want to learn it!'"

Shaham, who recently released a new recording of the Beethoven and Brahms Concertos, will also perform Arvo Pärt's Fratres in Friday's free program.

March 27, 2021 at 11:15 AM · Thanks, Laurie, for this link. What little I have previously heard of Saint-Georges (the Naxos recording) has told me that he was an original and soulful composer. In a very different idiom, I think the same is true of Arvo Pärt.

March 27, 2021 at 12:47 PM · Laurie, this was an absolutely wonderful concert and I would not have known about it had you not written this piece. Thank you!

March 27, 2021 at 03:47 PM · Thanks for writing this article to let me know about this concert! I loved the piece, which was new to me. It was so joyful and energetic, and reminded me what I love about the violin, even though I mostly play the viola nowadays.

March 28, 2021 at 01:23 PM · What a delightful concerto and Gil Shaham's performance was wonderful of course! I've played some of his quartets but none of his other works I'm definitely going to put this in my list of pieces to learn.