March 8, 2021, 1:46 PM · Violinists have been stringing their fiddles with "Dominants" for a half-century, and now Thomastik-Infeld aims to build on the popularity of its best-selling brand with a new line of strings called "Dominant Pro." 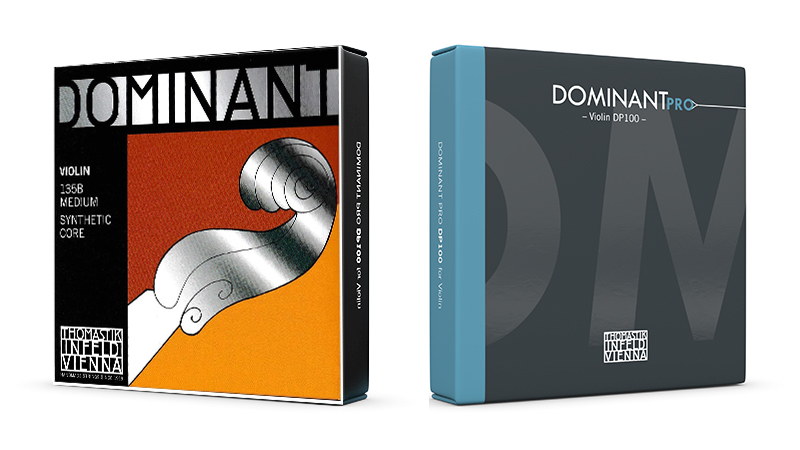 Pioneers of the synthetic core string, Thomastik-Infeld's original Dominants, launched in 1970, allowed for qualities of both steel strings (tuning stability and resistance to bow pressure) and gut strings (low tension and modulation capability) by using a synthetic core of very fine nylon fibers.

When it comes to the new Dominant Pros, "this new set was not aimed to change the basic character of Dominant, but rather to offer an additional, contemporary repertoire of strings," reads a statement by Thomastik-Infeld.

Generally, the new Dominant Pros tend to cost about $25 more than the regular Dominants (a quick check on the Internet shows Dominant Pro violin sets to run around $89; with old Dominant sets being about $64).

I have not personally tried them yet, but here are some of the characteristics that Thomastik-Infeld lists for the new strings:

Compared with regular Dominants, Thomastik-Infeld said that the Dominant Pros sound darker, more focused and respond more directly. They also project more powerfully, and the "break-in" period is supposed to be just a few hours, so they will be fully ready for performance within several hours of playing after re-stringing. You can read more about the new strings on this page by Thomastik-Infeld.

Is it true? I leave it to you to decide! If you have tried these strings, please feel free to leave your comments here, or share then on our Violinist.com Discussion board.

March 10, 2021 at 11:23 AM · Thanks for the info! I'm definitely thinking of trying these. It's been a little difficult trying to pin someone down on how directly they compare to Evah Pirazzi strings. From some of the places I've searched $89 seems to be the promotional price and that they will go up to $99. This is probably be the perfect time for me to experiment with strings since performances aren't happening right now.

March 10, 2021 at 03:12 PM · Shar did a nice comparison video with two violinists looking at Dominant, Dominant Pro, Peter Infeld, Evah Pirazzi, and a few others. They had each violinist play different strings on the same instruments, so it was a pretty good comparison.