March 5, 2021, 12:42 AM · Looking at violinist Hilary Hahn's new album - which is out today, you might wonder at first why it's called "Paris." One piece is undeniably French - Ernest Chausson’s Poème, but the other pieces include Russian composer Sergei Prokofiev’s Violin Concerto No.1 and the late Finnish composer Einojuhani Rautavaara’s "Deux Sérénades."

"I didn't set out to make an album called 'Paris,' but when all was said and done, everything on the album was about Paris, in one way or another," Hilary told me during an interview in February. 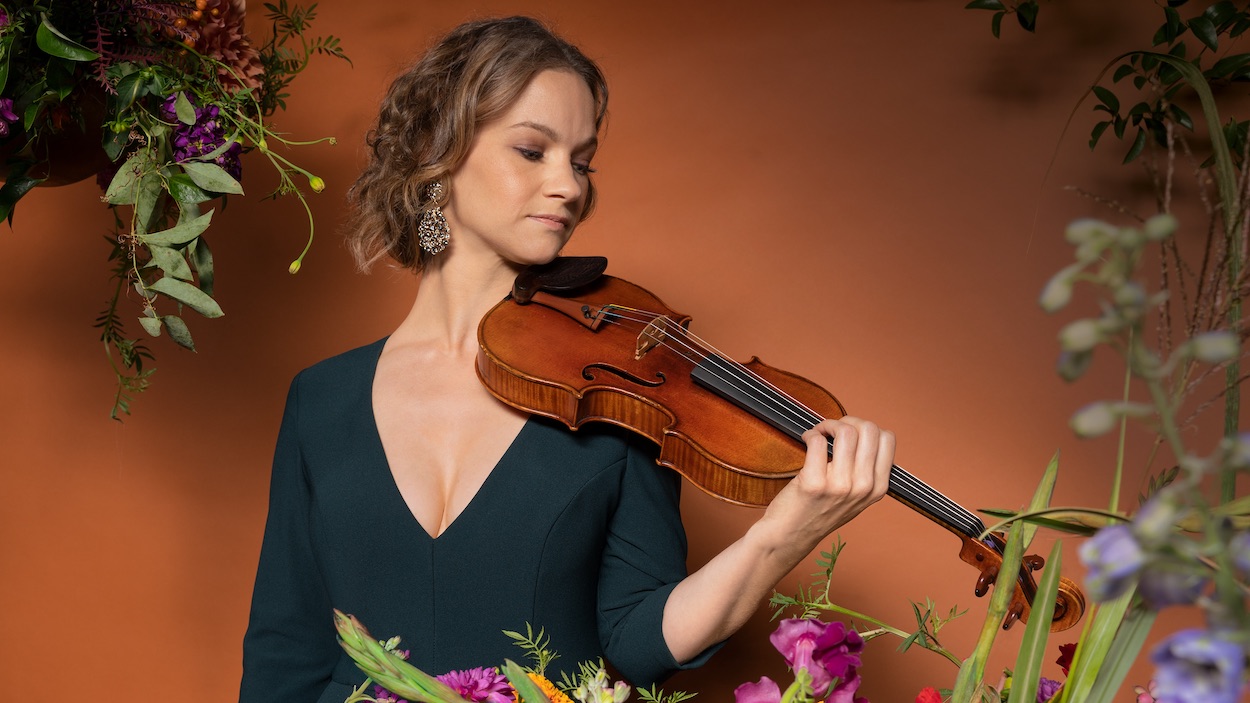 "I always admired the idea of the Parisian salons, where artists would get together," Hilary said. "I'm sure the reality of it wasn't quite as romanticized, and I'm sure there were a lot of people who weren't included. But at the same time, that ideal of having a place where everyone can gather and everyone can participate is really interesting."

The album evolved from Hilary's artist's residency in Paris with the Orchestre Philharmonique de Radio France, with conductor Mikko Franck, for their 2018-19 season.

The highlight of that season grew from an astonishing revelation -- a piece of music that was handed to Mikko Franck by the widow of the celebrated Finnish composer Rautavaara, following his funeral in 2016. It was a piece for solo violin and orchestra - "Deux Sérénades."

"Mikko, the conductor, was very close to Rautavaara," Hilary said. Early in his professional career, Franck, who is also Finnish, performed one of Rautavaara's operas, and the composer happened to be in the audience. "They met afterwards, and Rautavaara felt Mikko had captured the essence of his work and loved what he did with it. They became close friends. Mikko performed everything he could possibly perform by Rautavaara, and became super-knowledgeable about Rautavaara's work, intentions, mindset." The two even co-wrote a best-selling book, "Conversations and Writings," published in 2006.

Against this backdrop, when Mikko asked Hilary to perform Rautavaara's Violin Concerto with Radio France back in 2014, she knew it was a chance of a lifetime.

"I had not learned the piece, but I learned it for that performance because I loved it and I recognized the immense value of that opportunity as a musician," Hilary said. "It was such a great experience that I asked Mikko, 'Do you think that Rautavaara would write a violin concerto for us to perform with Radio France?'" Franck thought it was a good idea - but not the right time to bring it up, as the composer was very ill. When Rautavaara passed away in 2016, that seemed to settle the question.

As it turned out, Franck had had the conversation with Rautavaara, and they'd discussed, instead of a concerto, a set of serenades for violin and orchestra. But the process had gone no further - so Franck thought.

"Then when he went to the funeral, Rautavaara's widow took Mikko back into the study and showed him a nearly-completed manuscript that had been sketched out in completion but not completely orchestrated," Hilary said. "The violin part was all done, almost all the orchestration was done, but there was a moment where all the staves just stopped, and then there was just the sketch to refer to. It was 'Two Serenades,' titled in Finnish and French, and it was for violin and orchestra. Mikko just knew: This is it."

"That was the last work in Rautavaara's catalogue, and so we premiered it posthumously," Hilary said. "It was a labor of love for a lot of people, to bring that premiere to fruition." At the end of the premiere, emotions ran high when "Mikko took the score and he held it up to the heavens, for a moment of applause from the audience."

"In music, we teach each other, and when one person passes away, another person carries on the knowledge and teaches to the next generation," Hilary said. "To be part of something so clearly illustrating that process - I felt like I was observing a kind of magic happening."

That's just one of the pieces on this album. The one that grabbed my attention was Chausson's "Poeme." I have not been to a concert hall since early 2020, and during that year, I've somehow listened to a great deal of music on my computer. What a revelation, to simply listen to Hilary's recording out loud on on a good speaker in my living room, and to close my eyes. The Chausson made me feel surrounded again by the orchestra. It unfolds like some kind of fever dream, ranging from a tentative lone violin voice to triumphant full-orchestra climaxes, with rippling passagework and soaring melodies between.

"I think (the Chausson) needs a collaboration where the violin doesn't lead the way," Hilary said. "The violin needs to be free to explore its maximum range of expression as the solo instrument, but the orchestra has to complete the range. I see my job as taking it down to the smallest point, giving impetus where it moves a little bit more, and passing it off to the orchestra for the biggest moments, which then bloom out of whatever I was playing. To me, this piece is emotional. There is technique in it, but I think the technique serves the gesture, rather than being the gesture."

Chausson wrote the piece in 1896 for violinist Eugène Ysaÿe, and its Parisian premiere took place year later. That premiere in Paris "is what put Chausson on the map as a composer, it really got his composing career going. Unfortunately, shortly after that, a couple of years later, he died in a cycling accident," Hilary said.

"I'm not usually swayed by the historical events around a composer's life, because I'm very dubious that we can actually connect dots, unless we're inside the composer's head," Hilary said. But in this case, she feels that the composer's life's story -- which ended so soon after the piece was written -- hangs over the music like a premonition of loss. "For me, when the music goes inward, there's grief in it. There's a sense that every moment in this music matters, because there aren't infinite moments past this piece, in which he was the same composer. The contributions he left are finite, and this is such a complete contribution to the repertoire. So I value every moment in this piece."

Sergei Prokofiev's First Violin Concerto also is connected to Paris, where it was premiered in 1923.

For example, "ponticello" - a technique in which the violinist bows near the bridge to create a wispy-spooky voice. "In the second movement, it's not just ponticello, it's all down-bows - hacked ponticello! Then ponticello slurs, with fast notes, going all the way to the top note. Okay we did that, now let's put a mute on it and do it really quiet. Then oh, while we're doing these eighth notes, let's throw in some harmonics, and then going up to a big squeak at the end (she sings it). What else can you do with this instrument?"

"And Prokofiev choreographs the technique in a way that shows up in body language," Hilary said. "When the music gets densely complicated, the soloist is also dealing with densely complicated techniques. For example, the music is getting faster and faster - your cardio goes up; then suddenly you have to stop everything in your body from shaking to play a really quiet cadenza. The emotions and the physicality of playing the piece are so connected, that I think it's impossible for the audience not to feel that, as well. You sense when someone is experiencing something with their whole self, and this piece forces the performer to do that."

While Paris remains a focal point for art and music, today's artists don't need to gather in person to collaborate, especially during this pandemic. Hilary, for one, has found a creative home on Instagram, where her "violincase" account has 334,000 followers.

"I don't really do social media as a career tool, I started it as a creative outlet," she said. "My engagement with Instagram grew out of my blogging early on, when I wished that there were a format on my blog where I could just do a photo."

"I'm not a person who lives on social media, but for that sense of community and those artistic surprises, I do like going there," she said. "I enjoy experiencing any kind of art that can be captured in the visual sense on Instagram -- I really like seeing things from dancers, from visual artists. It points me in many different directions outside of social media that I would like to explore."

"One of the people I started following early on was Sofia Salazar, an Argentinian artist who lives in England," Hilary said. "She shows a lot of behind-the-scenes art process, and that helped me to connect with her art." When Hilary had the opportunity to do a little something extra for the Paris album -- a tote bag souvenir that is included with the vinyl version -- Hilary jumped at the chance to work with Sofia. The result was the line drawing used for the tote: 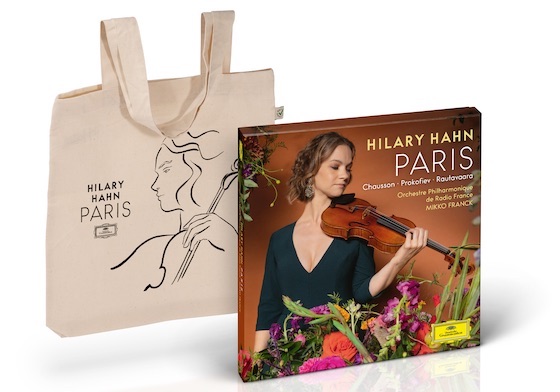 If you want the fancy LP with the tote bag, here's your link. And if you would like to hear more of my conversation with Hilary, including her thoughts on her 100 days of practicing project and what lies on the other side of this pandemic, please watch our video.