V.com weekend vote: Do you do wrist vibrato, arm vibrato, or both?

February 12, 2021, 10:05 PM · Vibrato adds beauty, intensity and personal expression to string playing - but how do you accomplish it? 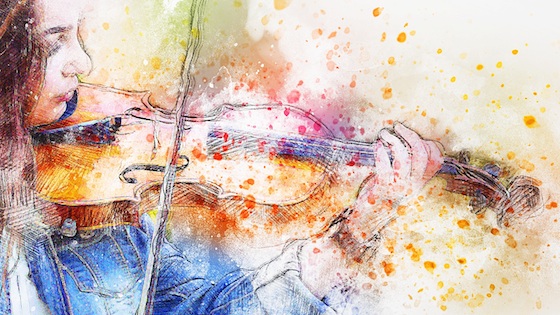 Paul Stein's blog this week got me thinking about vibrato and how we do it. Physically, it's a tricky feat. Starting with precision accuracy, the finger must then wobble fairly widely, without losing that sense of correct intonation. The fingertip remains in place, while the movement comes from either the wrist or the arm.

As a teacher I can attest to the fact that players arrive at that movement in many different ways. Certain vibrato exercises will open the gates of knowledge for one student while leaving another befuddled.

Some find it's easier to move from the wrist, while others move from the arm. Personally, I began with a wrist vibrato, trying to imitate the more advanced kids, without a lot of guidance from teachers. It worked - probably because I'm left-handed - and then in college my teacher taught me how to do an arm vibrato, which was easier when playing chords or very high notes.

Please participate in the vote and then tell us about your vibrato adventures. What helped you learn it? Which is easier for you? Are you still learning, and what are your questions?

February 13, 2021 at 04:12 AM · You're left handed?!?! So am I. I've never before heard of a professional violinist who's left handed. It's been a source of nothing but trouble for me (bowing, bowing, bowing). I can't even play in tune. But I feel a little better now!

February 13, 2021 at 06:27 AM · I voted "wrist better, but both". It's kind of hard to say but then again I think the majority of motion comes from my wrist and fingers and less from my arm because of my physicality (I'm double jointed and was born that way), which means my finger wiggles a lot in vibrato.

February 13, 2021 at 11:04 AM · I voted 'arm only' but wondered if I should have plumped for 'I don't yet do vibrato'. My vibrato is probably not 'correct' - it is certainly very light, though that doesn't really matter as I play a folk repertoire and only need it for laments and slow airs.

I would love to get some expert tuition on developing vibrato (after fifty-five years!) once lockdown is over. As a child, I was checked every time I thought I was getting somewhere as my teacher would say I wasn't doing it properly so in the end I gave up.

If I'd known about arm vibrato in those days, I think I might have made it.

Still - this time I'm not going to give up! Maybe I'll get there in ten years' time, when I'm nearly 80.

February 13, 2021 at 12:31 PM · Wrist better, but both. I used only a self-taught wrist vibrato for well over a decade, before finally learning an arm vibrato from an online workshop. I still use only wrist most of the time; I use arm vibrato mainly for double-stops, and occasionally on the lower strings if I need a wider vibrato.

There have been lefty pros. The most obvious I can think of is Joseph Silverstein, famous concertmaster of the Boston Symphony.

February 13, 2021 at 12:50 PM · Oh, I do use finger vibrato (and not arm vibrato) in high positions. For me, that starts somewhere around 8th or 9th position. (This is on viola. I don't play violin often enough to know my tendencies there.)

February 13, 2021 at 07:52 PM · I know plenty of left-handed professional violinists. In my orchestra we have a disproportionate number of lefty string players compared with the general population.

February 13, 2021 at 11:31 PM · My teacher has me focusing on hand/wrist vibrato. It's coming along (finally), in that it's fast enough and isn't ugly. I've not yet learned how to deliberately vary it but that will come with time.

February 14, 2021 at 09:37 AM · Disclaimer: these are my personal opinions. I prefer wrist vibrato because I think it sounds cleaner, so that's my default. However there are some cases where arm vibrato is more practical, so it's good to have the ability to do it, and sometimes finger vibrato is the most appropriate so that's also good to have.

I agree with Mary Ellen, watching my colleagues away from their violins, I reckon the are more than average "left-handers" amongst us. After all we poor "right-handers" have to learn make the left hand lead the right.

February 14, 2021 at 04:36 PM · There are times when I deliberately don't use vibrato. Typically these are when practicing a difficult passage, or even scales/arpeggios, when playing vibrato-free may highlight an intonation problem that needs attention. The other absence of vibrato is in some genres of folk music, in particular Irish and English music for dancing where vibrato has long been considered non-traditional. A reason for this may be that the presence of violin vibrato in some ensembles in which there are also non-vibrato instruments will make the violin inappropriately soloistic. My teacher uses this philosophy in her 4-piece professional folk band Spiro, the other instruments being piano accordion, mandolin and acoustic guitar.

February 14, 2021 at 10:12 PM · Probably a mix of arm and wrist vibrato; Arm vibrato in the lower positions, wrist motion in the higher positions, where the hand would bump into the instrument if you use arm vibrato. The arm vibrato uses the larger muscles of the upper arm. I think it sounds stronger, faster, healthier. I started with the arm vibrato. Later one teacher had me learn the wrist vibrato to slow it down and widen it. The finger-vibrato is a bit of a misnomer;- the muscles that produce that motion at the last bone in the finger are much lower in the arm.

I'm still trying to improve my left-hand position so I'm not leaning the neck against the side of my index finger for support. Originally I was gripping the neck there for stability, which is why it took me six years to get any sort of vibrato at all.

February 17, 2021 at 12:10 AM · Wrist vibrato sounds less heavy to me, and I like the lighter touch in most music. Also, I agree with what Trevor and Michael have said. In the traditional folk & fiddle music of Ireland and Scotland vibrato is considered an ornament, to be used with restraint, even in slow airs where many classically trained musicians might be tempted to lay it on broadly.

February 19, 2021 at 08:01 PM · I use a combination of wrist and finger vibrato and am surprised that the latter was not listed as an option. I have specific techniques and steps for teaching both. When the student is still in the first position I introduce finger. When the student is fairly comfortable in third position I introduce wrist. It is easier to get get into the full swing of the wrist movement at first in the third position so I wait with that. Finger is good for a narrow and focused impulse and also very comfortable in high positions.

BTW I am also left handed and so was Joseph Silverstein.

As far as I know and/or has been told finger vibrato is for the very fast narrow vibrato, hand vibrato slower and wider but can be varied a lot, and arm vibrato is for slow and wide vibrato.

Anyway, no matter how you do it, an ideal is to be able to vibrate in any speed and be able to make both a narrow and a wide vibrato.

Most composers don't indicate what kind of vibrato to do, there can be indications of whether to play with vibrato or not, only sometimes in contemporary music there is actually an indication of how the vibrato should be performed. Like I have played music where the composer had indicated that the note should start with no vibrato, then the vibrato should start very slowly and gradually speed up and become fast.