February 11, 2021, 3:54 PM · It's been nearly a year since that day in March when everything seemingly shut down at once, ushering in a devastating period for performing arts organizations whose seasons were cut back or even completely shuttered by a global pandemic.

But while certain organizations went into hibernation, higher education has largely carried on for music students, thanks to the resolve and creativity of teachers, administrators, information technology specialists and students themselves. One music school that fully embraced online learning was the Colburn School in Los Angeles - and one teacher that carried it to the next level has been violin faculty instructor Robert Lipsett. 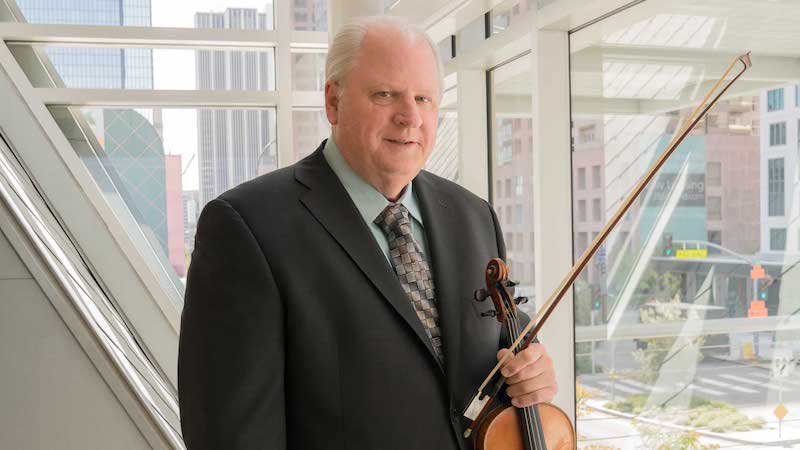 "We closed around March 15, and we've been entirely online since," said Colburn President and CEO Sel Kardan. "The first step was to make sure everyone was safe and help transition students from campus. At the same time, we immediately started working on the technology piece. We realized, across the institution, people would have different needs."

Colburn was already wired for things like giving livestream performances, but this required a whole new level of jumping into the 21st century.

"As far as the faculty and my colleagues are concerned, this caught everybody by surprise," said Lipsett, who holds the Jascha Heifetz Distinguished Violin Chair at Colburn. "Nobody had any experience in this area, including the IT guys -- they knew more than anybody else, but no one had ever contemplated putting an entire school on the Internet. So how to go about that? It was quite an adventure. We had to do it, and so we had to figure out how to do it. And we did, but it took some time."

A little like learning to play the violin, success came only after a great deal of facing the seemingly impossible, then getting down work and figuring out all the nitty-gritty details.

Before all this happened, "my computer skills had eroded; I was not equipped at all," Lipsett said. "It happened so suddenly, and I realized I was in serious trouble." On the eve of the big shutdown, Lipsett met with the information technology specialists at Colburn, who helped him order a new Apple computer, set it up and get started with the basics.

"But nobody knew how to solve some of the problems we faced," Lipsett said, "because the problems weren't necessarily in the computer. Some were with the feed from the provider, some were from wifi -- there were numerous pieces of the chain that I had no knowledge of - none of us did."

"But I have good ears, and so little by little as months went by, I started to hear: when it sounds like this, this is the problem. When it sounds like that, that is the problem. Now I'm at a point where, 95 percent of the time I can identify where the problem is coming from," Lipsett said. "Sometimes it's fixable right then, and sometimes it's not. I do give a lot of credit to Zoom and its flexibility. I mean, we have entire concerts with 200 people on Zoom, and you can manage that number of people."

"In my case I had to reinvent the way I teach to be productive," Lipsett said. "I work in that final two to three percent of perfection in quality - and it doesn't exist on any of these formats. So I can't bring a student up to the highest possible level, as I would normally design to do. So I realized I can bring them up to a good level and then we'll put things aside and go through repertoire more quickly, with the idea of coming back to it after this is over and we can be face-to-face again. I have a wonderful class of Freshman students who I've never seen face to face, other than when they originally auditioned. So this is completely unprecedented, what we are forced to do because of this situation."

In keeping with his reputation as the highest of high-level teachers, Lipsett did not just want to figure out how to simply "make it work." He wanted to go well beyond that - to convert the in-person educational experience into a successful online experience in as many ways as possible.

"As you probably know, Mr. Lipsett never does anything less than 110 percent," said violinist Fiona Shea, a student of Lipsett's who is in her fifth year at Colburn. Although she has been home in Texas since March 2020, Shea has been on hand all year to help Lipsett in his continual efforts to improve the online experience.

"When we went online in mid-March 2020, the first step was getting set up for lessons and making sure that was all working," Shea said. "We experimented with several things; Mr. Lipsett did a lot of research, trying to see what was best for all his students, to recommend what we should use. And a lot of it was trial and error. Personally, I upgraded my wifi, and then we discovered the ethernet makes it that much better. And I upgraded to a new Mac computer and got a good microphone. Those were the first steps in setting things up, making sure students were getting the best out of their lessons."

Before this, Shea had helped in organizing the in-person studio classes. So her efforts turned to helping Lipsett organize online studio class, which featured not only student performances but also speakers such as former students and guest artists.

"I would go onto Zoom with him 20 minutes before class and make sure everything was set," Shea said. Lipsett designated Shea as the Zoom host, allowing her to let people into the online class and control logistics. She was also in charge of juggling spotlighted performers and master class teachers, depending on what was happening in that particular class.

In the summer, when he realized that Aspen would not take place, Lipsett formed a plan for his students to attend various online camps. "I tried to think, how could I keep my class motivated throughout summer? I decided we have to travel, go to various places - but traveling without traveling. So we had Sounding Point Academy with Fabiola Kim; then that dovetailed into Danielle Belen's camp; and then they had various other camps they did, like Perlman Camp and Heifetz Academy. Then we finished the summer with a more subdued camp of just our students, with Fabiola, Danielle and myself."

"When we went to put Forum online, I don't think people understood what it would require, to produce a concert like that at high-quality," Lipsett said. It's all too easy to post a Zoom concert that's a mess, with no production values whatsoever, but "that's not how I wanted to do it," he said. "I wanted it to be as close as possible to what we have live." Performance Forum is a weekly concert series that features the best-of-the-best of student performances at Colburn. "It's very high level, world-class, and it's driven by the faculty, who decide when and if a student is ready." It's also an event: performers dress up, the whole school attends, they go to lunch together afterwards and it's a bonding experience. "It's major success to play on Forum."

How to make that happen online? Shea said Lipsett came up with some specific ideas for creating that sense of event, within the parameters of Zoom.

"Mr. Lipsett is all about the production side of things and making things very exciting, especially on Zoom calls where every class can feel like the same setting," Shea said.

The first idea involved how everyone enters the Zoom space. "Normally, going to a recital, you'd be talking to the people around you, or looking over the program - but Zoom can be very awkward when you are just waiting for the first person to talk," Shea said. To that end, at the beginning of Performance Forum, when people are entering from the online waiting room, they first see a slide show, which Shea shares from her screen.

"I put together some photos of very iconic Los Angeles landmarks: Disney Hall, Dodger Stadium, Hollywood Boulevard..." Shea said, and it is accompanied by old music, from the '40s or '60s. "It's similar to an older television programs, where they have these elaborate introductions," she said. "It allows there to be something that is playing while people are coming in, so they see this on their screen instead of all of the tiles. The idea is to minimize the awkwardness of being in this online setting."

After that "we have a fanfare that is normally on the livestream broadcast, so we have that music playing, and that signals that we are starting our performance," she said. Then, she spotlights the designated master of ceremonies, Adam Millstein, who also was the announcer when Forum was a live event. He introduces each performer, "which is another way to helps ease the transitions, without it feeling very stark."

While teachers and students have been away in the virtual world, adapting to an online model while living at home, Colburn itself has continued to work on the technology at its campus, connecting rooms of the school (including the Heifetz Studio, where Lipsett would teach in a normal year) with audio, video, low-latency monitor systems that will allow people to record in real time together -- and stream performances together -- from different rooms. "We've tested it with a quartet but have not put it into practice. That's the hope, as we go into the spring," Kardan said of how they will be able to use the connected rooms. "We have tried recording a pianist in one room, violinist in another, to make audition tapes. That seems to have gone very well."

In general, the attitude at Colburn has been to roll up their sleeves and made things work amid a challenging set of circumstances..

"I'm proud of what has been accomplished," Lipsett said. "No one would have wished this on us, but now we've been forced to use this technology, many see the potential value. I see it as an extra tool in the toolbox." For example, before all this, if a student needed extra lesson time on a certain week, it might not be practical for them to get back to Colburn for that. Now that both students and teachers are adept with the technology, "that extra lesson potentially could be conducted on Zoom, with a minimum outlay of time and effort." Also, "Master classes could be a hybrid, and camps could expand their reach."

Through all of it, the priority has remained: to give the students the quality instruction, performance opportunities and motivation they need to keep making progress and growing as artists.

"I'm proud to say, my students are thriving," Lipsett said. "They've conquered the technology problems, and they have really thrived."