Putting Women in the Program: The American Youth Symphony's Pledge

February 5, 2021, 12:55 AM · A couple months ago our article about the problem with the term "concertmistress" received a strong response - resonating with musicians around the globe.

Why did it strike a chord? Because it's not just an argument over language - concertmistress vs. concertmaster. It cuts into the issue of representation and respect for women in classical music. While more women have joined the ranks of major symphony orchestras and ascended to leadership positions, the commitment to music written by women remains weak across the board.

At least one organization -- the American Youth Symphony -- now is fighting that, with its groundbreaking pledge that 50 percent or more of new music performed by the orchestra will be the work of female composers. With its mission "to inspire the future of classical music," this orchestra clearly envisions a future where classical music fans can both see women on stage -- and can name at least one female composer whose music they know. 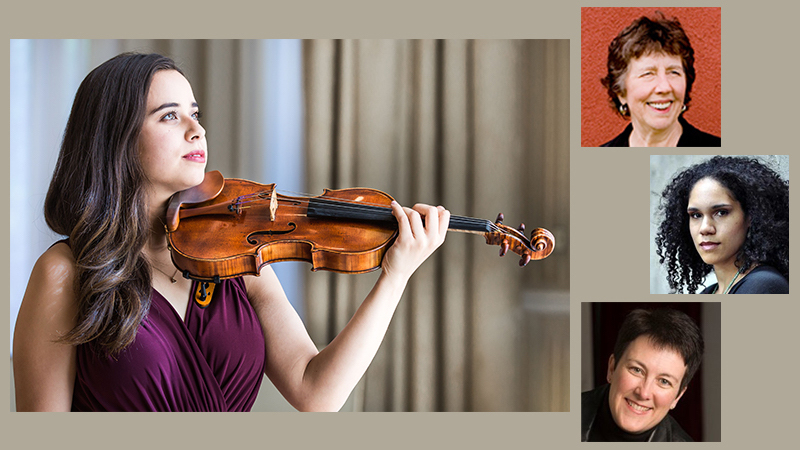 It all began when conductor Carlos Izcaray started planning a single concert that would feature female composers. "We had never done an all-female composer concert," said Izcaray, who has been Music Director of the AYS since 2016. "But as we were doing the research, it took about two seconds to realize, one concert is not enough."

But even that was not enough. Izcaray realized that "the real fairness would be to just make a public pledge and to commit to it." That is when the orchestra officially pledged that, moving forward, 50 percent or more of new music performed by the orchestra would be by female composers. "That is the make-up of our society, and I think that is sustainable," he said.

"The 'Year of the Woman' was our year to jumpstart that pledge -- something that hopefully the people who are running AYS beyond my tenure will use as a precedent," he said. "It says that we really mean business about this, and we hope others will do it, too."

Why is such a pledge necessary?

Tara Aesquivel, who is Executive Director of AYS, wrote specifically about the reasons, in a 2019 article in Ms. Magazine. In the article she offers some eye-opening statistics. For example, the percentage of women instrumentalists increased from 38.2 percent in 1978 to nearly 50 percent in 2018. But in "top orchestras" in 2018, only 31 percent of musicians were women, and only 21 percent of principal and titled positions were held by women.

Perhaps most egregious has been the lack of programs featuring female composers, as well as the small number of women on the podium. Aesquivel's article cites a statistic from The Guardian showing that just two percent of works programmed by top orchestras worldwide (in 2018-2019) were written by women, while 95 percent of concerts included music written only by men.

"As we look towards the past, it's very obvious that we are centuries behind," Izcaray said. In terms of the sheer number of works, there is not a robust canon of repertoire written by female composers of the past, as there is by male composers of the past. "There were a few heroic women composers from the past who were able to create repertoire, but the reality is that young girls and women were not given the opportunity to even explore this path, or a career, to say the least."

"So where can we tip the scale the right way?" Izcaray said. The key is to support existing female composers while encouraging future ones. During the "Year of the Woman," the orchestra featured female composers and guest artists, as well as female "fellows" who were in charge of programming.

How has this kind of programming affected the members of the youth orchestra?

"Playing all the music by women was eye-opening, to see how much incredible music women have written," said Gallia Kastner, the current concertmaster of the AYS. Originally from Chicago, Kastner is currently working on her master's degree at the Colburn School.

Kastner took the music by female composers to heart. "I love anything by Jennifer Higdon - every time I play one of her pieces I feel transcended into a different universe." Playing Higdon's "Blue Cathedral" with AYS in Disney Hall was an unforgettable experience for Kastner. And the AYS concerts featuring works Joan Tower and Jessie Montgomery served as an introduction to those composers for Kastner. Since that time, Kastner has further explored the works those composers on her own, and even programmed their works when given the chance.

Growing up mostly in the 21st century, Kastner can attest to the fact that females are being encouraged in classical music, from a young age. (In fact, if you look at statistics from major competitions, in recent years, participants are sometimes overwhelmingly female.)

"Growing up, studying with (Almita and Roland) Vamos, and now with Mr. Lipsett - most of my studio-mates were women - I was surrounded by this amazing female energy," Kastner said. "Not many in the studio were men, period. My first encounters with realizing that I could be a minority was participating in separate things that didn't involve my education, and that's when I realized, I was one of few."

"I think times are changing, and women are seen in the forefront now, at least in the classical music industry," she said.

Her experience in the AYS has not only expanded her view on women composers, but has also allowed her to test the waters, as far as being a concertmaster is concerned.

"It was through my experience with AYS that I realized that I really loved being a concertmaster," said Kastner, who started in the orchestra in 2016. "My whole life, I had been trained to be a soloist. But I loved the idea that in the concertmaster seat, I could be a leader and a soloist at the same time, while playing incredible music with all my colleagues. It led me to want to audition for those kinds of positions - in fact, I was just about to, when the pandemic started. I would still like to aim to be a concertmaster - maybe the first female concertmaster of a major symphony."

February 6, 2021 at 12:43 AM · Love this! I remember how excited I was when Nurit Bar-Josef became concertmaster of the National Symphony Orchestra when I was a young violinist growing up in the DC area - so inspirational and she's such a wonderful player!

February 6, 2021 at 08:46 PM · Thanks for this article Laurie!! I think it's a great decision by the AYS; there are so many wonderful female composers; Jennifer Higdon is certainly one of them; Blue Cathedral as Gallia Kastner said, and her Concerto for Orchestra is a favorite of mine. Also Gabriela Lena Frank, Jessie Montgomery and others. Beautiful, inspiring music should be recognized, performed, and shared for the world.

February 8, 2021 at 11:26 PM · Musicians in professional orchestras should not be hired just because they are women or a member of a minority. It should be based purely on their level of talent and ability to play their instrument at a high level. Before you call me a racist, I am Hispanic.

February 9, 2021 at 07:07 AM · @Victor. I don’t think anyone would say that the standards for selecting a professional orchestra player should be relaxed, but the point of Laurie’s article was the AYS pledge that at least 50% of their program will be of works by female composers. Jennifer Higdon and Jessie Montgomery are just a couple of the composers they have or will be performing. There are a great many fantastic female composers going back to at least the late 1700s with Maria Theresia von Paradis; their goal is to perform those works and showcase wonderful pieces that aren’t performed nearly as much as they should be.