December 6, 2021, 1:57 PM · Beethoven's Symphony No. 7 is an old musical friend to many of us, and before the pandemic, I probably took it for granted. Some orchestra is always playing this piece somewhere, right?

Then everyone stopped performing live for a year or more. One could still enjoy Beethoven 7, simply by listening to a good recording.

But hearing this symphony played live by the Los Angeles Philharmonic on Friday at Disney Hall, surrounded by fellow classical music fans, I realized that this it is absolutely meant for the here and now - for live performance. How I had missed this kind of in-person experience! 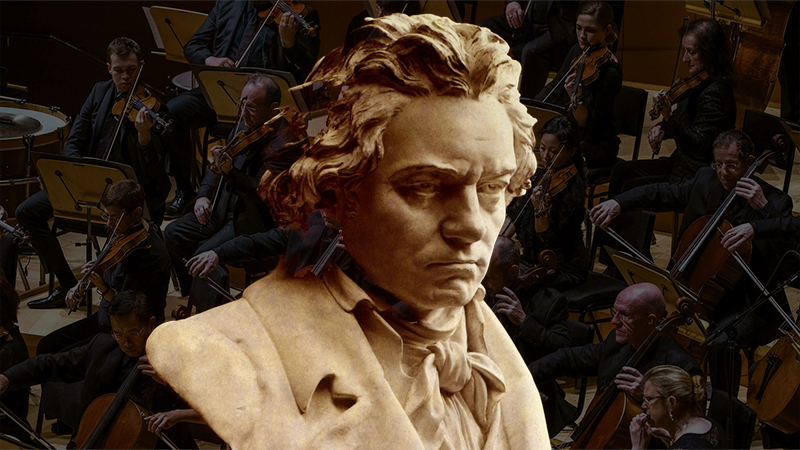 The concert that I attended, conducted by Xian Zhang, also included a performance of two new works, "Primal Message" by Nokuthula Ngwenyama (read our interview with her here) and the premiere of a violin concerto by Julia Adolphe, called "Woven Loom, Silver Spindle," played by LA Phil Concertmaster Martin Chalifour.

Let's face it, though, the near-capacity audience, with plenty of young people, was definitely most enamored of the Beethoven, giving the performance an unhesitant, full-house standing ovation after its conclusion.

There are many reasons, but several stood out for me. For example: the brilliant second movement, starting with just a heartbeat in the basses and blooming into a full orchestral apotheoses, was amazing to hear Disney Hall, with its pinpoint acoustics, played by such a top-notch group of musicians.

The interplay of all the sections was masterful and humorous in the third movement, with so many textures poking through, and this feeling carried into the fourth movement, where the string section tosses around musical phrases like volleyballs. It's not just music, it's a show, the the musicians of the LA Phil, with Zhang at the podium, went at it with full energy and enthusiasm.

The concert opened with Ngwenyama's "Primal Message," a piece inspired by the Arecibo message, the radio message that was broadcast into space in 1974 from the Arecibo Observatory in Puerto Rico. What would a wholly musical message sound like?

The result, for string orchestra and percussion, is lush and tonal, with melodies that would work well in a film score (this is LA, after all!). Ngwenyama, a violist herself, makes generous use of the lower strings for melody-making, while also moving into the highest stratospheres of string playing - down-to-earth and up into space. There is a constant sense of motion and moments that feel grand and noble, as well as more intimate ones. I particularly liked the end, which trails off quietly upward.

(If you are curious, you can listen to the piece here, in a performance from October that Zhang conducted with the National Arts Centre Orchestra in Ottawa, Canada.)

Adolphe's new violin concerto, "Woven Loom, Silver Spindle," commissioned by the LA Phil and given its world premiere Friday, centered more on creating a musical tapestry and less on melody and motion. Adolphe, who lives in Los Angeles, has a master's degree from the USC Thornton School and a Bachelor's degree from Cornell University, with many plaudits and upcoming commissions.

Performed by concertmaster Chalifour, the violin part unfolded in well-executed fragments of sound, with the violin being a primary element in a texture largely composed of arhythmic sound-weaving. Chalifour was very at ease and in-control. There were many orchestral affects, like the plunk of the piano, its note then sustained in another part of the orchestra, sounding like water dripping. Or the tinkle of bamboo wind chimes - giving it the feeling of a walk through a wonder forest. The orchestral background grew at times thicker, then thinner. The work hewed true to Adolphe's own description of it as juxtaposing "two contrasting images: the shining, agile, brightly spinning realm of the violin and the darker, heavier, all-encompassing framework of the larger orchestra."

December 6, 2021 at 09:39 PM · Oh, Laurie, I wish I had been sitting next to you! The 7th became my favorite when I first played it in college. And it's remained at the top of my list many, many decades later. Thanks for giving us a glimpse into this wonderful concert.