November 30, 2021, 9:38 PM · In the viola world, people know the name Nokuthula Ngwenyama (or "Thula," pronounced "Toola"). Thula won the Primrose International Viola Competition when she was just 16. She went on to win the Young Concert Artists International Audition and then embarked on something rare for a violist: a solo career, starting with debuts at the Kennedy Center and the 92nd Street Y. A recipient of Avery Fisher Career Grant, by now Thula has soloed with orchestras and played recitals all over the world. 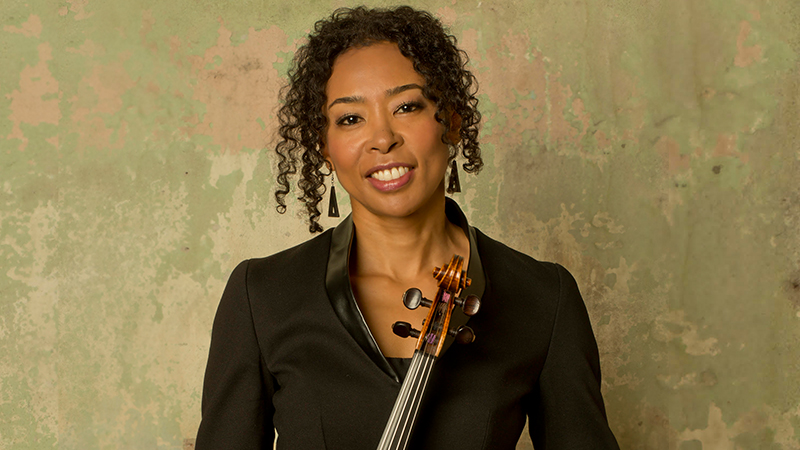 And she kept advocating for the viola -- she served on the board of the American Viola Society, as President for three years. She also served as Director of the Primrose Competition for eight years. (The next Primrose Competition actually takes place in mid-December at The Colburn School - click here for more info on that).

At the moment, though, Thula's star is rising in a different but related musical field: as a composer. This weekend the Los Angeles Philharmonic will give three performances of her piece "Primal Message" with conductor Xian Zhang. Click here for more information on the concert, which also includes the world premiere of Julia Adolphe's violin concerto, "Woven Loom, Silver Spindle" performed by Martin Chalifour; and Beethoven's Symphony No. 7.

Thula's path as a musician began in her native Los Angeles, when she was four years old. Thula wanted to learn to play the violin, but her mother advised that she start with the piano, and so she did.

"I started composing in those early Yamaha piano classes that I took," Thula said. The classes, taught by Ann Pittel ("Miss Annie"), also emphasized ear-training and solfege, and "each student received a kit. It had the grand staff on it, with magnetic notes. No rhythmic value, just little circle magnets. And we could move them around on the grand staff. We would have an assignment of arranging these notes, and then playing them."

"Being given those notes from the get-go made me feel like I had the freedom to put them wherever I wanted, and I could create a series of sounds," Thula said. "I think that everyone should start like that, being able to manipulate the notes and then see what happens."

She started violin a bit later, but it was not all smooth sailing. Toward the end of Suzuki Violin Book 1, Thula hit a roadblock: Minuet No. 2 by Bach.

"After not being able to pass Minuet No. 2, my teacher basically told my mother, 'She'll never be a violinist,'" Thula said. "My mother told me to pack up my instrument, and we walked out."

"She brought me to a different teacher, Bonnie Bell, who started Sheryl Staples and a lot of other wonderful violinists who were coming out of LA at the time," Thula said. "Bonnie promised me that if I did everything she told me to do, she would make sure that I could play the violin. And she made good on her promise!" From then on, Thula's love for music grew steadily, along with her playing abilities. She continued on violin with Sybil Maxwell, then Michael Tseitlin; then she switched to viola and worked with Alan de Veritch, who prepared her for the Primrose Competition.

"I knew I was going to be a musician," Thula said. "I fell in love with music, and the violin, and the viola, going to Santa Monica Youth Symphony rehearsals, with Manuel Compinsky conducting." That youth orchestra was packed with young musicians that would go on to make a name for themselves, among them violinists Ida Levin and Dylana Jenson. "These were kids playing their hearts out on the highest level," Thula said. "I would just walk into these rehearsals, and that's how I fell in love with music."

And what made her fall in love with the viola? "The sound," Thula said. Specifically, she admired Michael Tree's playing, in a recording of the Mendelssohn Octet from Music of Marlboro series - in the third-movement Scherzo. "I'd never heard anybody play like that - short pearls on the string that just rung with the sweetness of honey. And that sound," Thula said, "I thought, I'd never heard that sound on a violin. I kept trying to make that warmer sound, and then I realized, that's not a violin, that's a viola."

That's when she took her grandmother's old French factory violin from the closet and re-strung it with viola strings. "So I played on that. I learned the clef from a book called something like 'Learn Viola Clef from the Violin Clef' - then boom, I was playing!" At age 13, she was gigging in LA, playing in many different orchestras, and playing at Colburn School as well as her high school, Crossroads School. "It was a great foundation."

With all the violin and viola playing and performing, composing remained present, but at the sidelines.

"I would play the piano and improvise," Thula said. "I felt freer when I was playing the piano than when I was learning violin because when you're learning the violin, it's so hard to just make a sound. The struggle is real! (She laughs) I mean Minuet No. 2 - I practiced it! I still remember the sensation of not being able to coordinate my left hand with the right hand and the string crossing. I remember that wall. It's really hard to make music through learning the mechanics of the instrument."

"Having the keyboard skills helped with composition, and I was encouraged by my mother, who said, 'Oh, just record that, don't worry about writing it but record it.' She taught me to value my work and to save my work." At Pacific Palisades Elementary School, her orchestra teacher Helen Cranmer encouraged her to enter a composition contest, and she won, with a duet for violin and piano about fog rolling into the canyon. "That is the first time I was recognized as a composer, as a sixth grader."

Her Crossroads high school theory and harmony teacher, Mary Ann Cummins, was a former student of the composer Nadia Boulanger. "She gave us composition and arranging exercises," Thula said. "She is a wonderful composer herself and an amazing musician. She encouraged all of us. She would get my assignments and hand them back and tell me point blank, 'Well, you're a composer.'" At Crossroads she also studied theory and harmony from Warren Spaeth, and counterpoint from Dr. Herbert Zipper.

More recently, a commission in 2015 brought Thula back to composing in a significant way. "I received a call from Pilgrim Rest Baptist Church, the largest Black church in Phoenix. They asked me to compose a processional for their bishop, Bishop Alexis Thomas, who was celebrating his 35th year with the congregation," she said. They requested a solo violin piece with string orchestra.

Her mind went to the many instances in music history when the church commissioned music from composers. Thula herself attended divinity school - she has a Master of Theological Studies degree from Harvard University. Receiving that phone call, "I thought, okay, this is a calling, I'm supposed to be writing," Thula said. "I hung up the phone, and it was in that moment I just kind of knew - I'm a composer. Right now. This is it, the time is now. So I wrote that commission, and I've continued to write and receive commissions."

Thula's piece that the LA Phil will perform this weekend, "Primal Message," was originally written for viola quintet then re-created for orchestra. The subject is the Arecibo message, the radio message that was broadcast into space in 1974 from the Arecibo Observatory in Puerto Rico. The message, in binary, was meant to be deciphered as a picture on a grid, a postcard from Earth to extraterrestrial beings who might intercept it some 25,000 years from now.

Thula was inspired by Steven Johnson’s 2017 New York Times Magazine article, Greetings E. T. (Please Don’t Murder Us.), which goes into detail about the concepts behind the Arecibo message and what makes it potentially possible to decode by aliens - namely, the math behind it.

"This article captivated me," Thula said. "I thought, 'What should we put in a message that we're sending 25,000 light years away? What would I imagine putting in there, if it could be a musical message?'" Her mind went to the numbers, the intervals, the harmonic progressions. "I thought, what about working with some prime numbers -- 2, 3, 5, 7. I started thinking about having seconds, descending in seconds, going in thirds. Harmonic structure is very easy if we go around 5-1-5-1, that's very primal harmonic progression."

"I just started having fun with the idea of what a 'Primal Message' would sound like," Thula said. She wanted to convey more than the idea that humans understand prime numbers and have accomplished scientific feats. She also wanted to ask, "what could we convey about our emotional intelligence? And are we really ready to connect to another life form, when we're having such a hard time connecting with each other?"

The result is lush and tonal piece, about 10 minutes long, with sections with titles such as "Flow through space." It was premiered during COVID, in November 2020 by the Detroit Symphony to a largely online audience. Having the LA Phil perform it "is like a dream come true," Thula said. "It's my hometown orchestra, I love the LA Phil, and I love LA. I'm indebted to this city for being who I am, being the musician that I am and working in the way I work. This city has given me a lot. I'm very excited."