November 23, 2021, 1:35 PM · Congratulations to violinists Gil Shaham, Jennifer Koh, Augustin Hadelich and Curtis Stewart, as well as all the nominees announced Tuesday for the Recording Academy's 64nd Grammy Awards, which will will be presented Jan. 31. 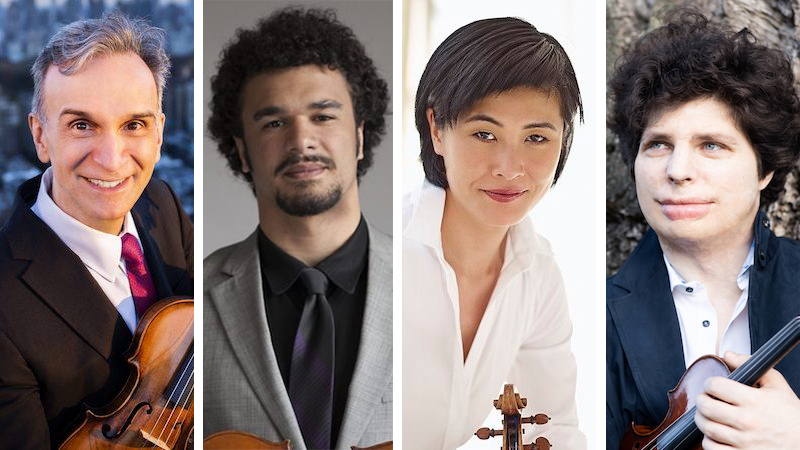 Here is a run-down of the main recordings that earned nominations for string players:

It's a beautiful performance of two of the most beloved concertos in the violin repertoire, and it followed Shaham and The Knights’ Grammy-nominated debut recording of Prokofiev's Violin Concerto No. 2, released in 2016. Read our interview with Gil Shaham and Knights conductor Eric Jacobsen about their ongoing friendship and collaboration; below is video from that conversation.

Koh's "Alone Together" project was created in response to the coronavirus pandemic and the financial hardship it placed on so many artists and musicians. The album includes a collection of 40 works -- 20 composers, most of whom have salaried positions or other forms of institutional support to carry them through this challenging time, agreed to donate a new, 30-second micro-work for solo violin, while also each recommending a fellow freelance composer to write their own 30-second solo violin work on paid commission from the artist-driven nonprofit ARCO Collaborative.

For Augustin Hadelich, lockdown was the perfect time to delve into Bach’s Sonatas and Partitas for solo violin and to undertake the enormous project of recording the whole set. "They are formidable tests of technical ability and stamina, but also of musical imagination and expressive range – they never cease to provide challenges, hope, and joy," Augustin said. For his interpretation, sensitive to historical practice, Hadelich chose to use a baroque bow. “It was a revelation," he says. "It felt liberating." BELOW: Augustin performs the "Preludio" from Johann Sebastian Bach's Partita no. 3 in E Major:

Told through video, violin, verse and electronics, "Of Power" is a contemporary "coming of agency" story - Grappling with themes of resilience, resistance and the nature of power, Curtis Stewart weaves a confessional narrative, through the lens of a Black man searching for authenticity in classical music. Original compositions and re-compositions of Charlie Parker, J.S. Bach, John Coltrane, Nicolo Paganini, Stevie Wonder, Ludwig Van Beethoven, Elektra Kurtis, Childish Gambino, Coleridge Taylor-Perkinson and Eugene Ysaye serve as vehicles for a post-classical visual album inspired by personal adversity and bolstered by the Black Lives Matter movement.

Click here for a complete list of Grammy nominations for 2022. (Scroll down to category numbers 77 through 84 for the Classical Music nominations.) Please feel free to highlight any nominations that stand out to you, in the comments section.

This year's nominees were voted on by Recording Academy voting members from nearly 22,000 eligible entries. The Recording Academy will present the Grammy Awards on Jan. 31, 2022, on the CBS Television Network and stream live and on demand on Paramount+.