Vivaldi Concerto in A minor: Last Mile with the Metronome

November 5, 2021, 1:15 PM · A number of years ago, one of my students hit a wall, studying the first movement of Vivaldi Concerto in A minor, the Nachez version that contains some tricky passagework. 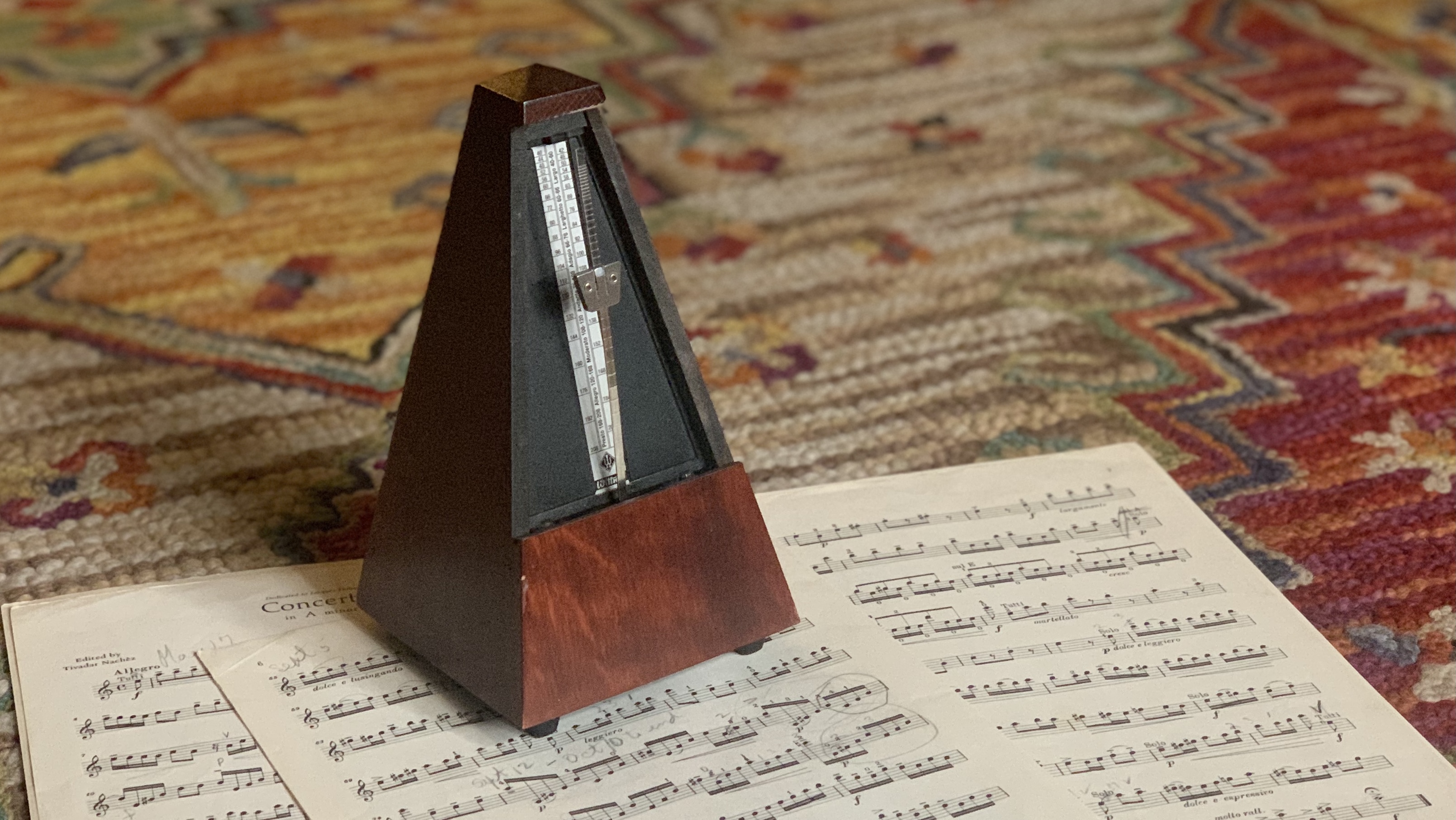 A little bit about this piece: when studied as part of a progression, whether as part of the Suzuki method or a traditional method, the piece occurs at an interesting juncture for students. Generally, the student is going from being a beginner to being more of a solidly intermediate student. It's one of those early "real pieces" - something that the pros play. It's pretty exciting - a student can find recordings of Itzhak Perlman playing this piece, or the wild-fast Baroque masters of Tafelmusik. Aunt Rhody's goose clearly has left the barnyard!

So when mastered well and played up to tempo, Vivaldi's Concerto in A minor can be a "gateway piece" that pushes a student's technique to a new level. Of course, this doesn't happen if the student bumbles through and leaves the piece after simply "getting the notes." And frankly, the challenge of the Nachez version is all part of it - it's a lot harder than Vivaldi's original, which has easier passagework. That said, I do see the musical argument for using Vivaldi's original - and it's a good alternative for students who are not ready for the big push of Nachez. If that "new level" is not happening at this juncture for a student, then it can happen later. It's better to take the "win" of playing the original and playing it well.

But for the student who hits the wall and then wants to climb it, I do have some ideas.

The first hurdle is obvious: the passagework. Play the difficult passages slowly, until all the notes are learned. Sounds simple enough, but this takes tremendous patience and honesty - no glossing over anything. Once you can slowly play the entire passage without any mistakes, play the passage in rhythms, including dotted rhythms and groupings of fast-slow. This will test the brain and take persistence to truly achieve each rhythm. After taking a passage through many rhythmic permutations, it will start to flow surprisingly well.

Musically, it's important to attend to a number of details: warming up repeated notes with some vibrato, dynamics, episodes that should get louder and peak at a certain note, repeated phrases that echo the second time, etc.. The first step is to become conscious of all these musical markings and conventions. Then one must execute them - not just barrel through.

For my student, she had learned the passages reasonably well, but there were still moments of bumbling, and overall the piece felt pretty frantic. There were efforts at musical expression, but it was spotty.

First we clocked her - how fast was she regularly playing this piece when she practiced? It was around quarter=88.

"You are still making mistakes and tripping over things at this speed, if we're honest," I said. "You need to practice for an entire week at a speed where you can play the entire piece without any mistakes at all." We agreed to set the metronome on 80. At that speed, the hard passages were simply not as hard. It was also much easier to pay attention to executing the dynamics and musical ideas. This student stuck to the plan and practiced every day at that lower speed. What did this do? This locked in a series of accurate performances, with time for the brain to plan the next move, execute passages correctly and perform the dynamics we'd planned. It's like creating a new habit of correct, calm playing, with a spacious feeling of time.

Now that might sound too simple to be true, but most of the time when people can't play it fast, they can't play it slow, or they haven't practiced playing it slow. At even a slightly too-fast speed, we "practice-in" mistakes and stumbles, repeating them over and over. Even with the luxury of playing an entire movement at a slower speed, you have to break those mistake habits and patterns, and learn to relax into an accurate performance.

Once she had really mastered this slow speed and relaxed into it, the next week we tried it again at her old speed of 88. Now it was accurate, but it still felt fast.

So we went the other direction. We tried it at 92. At this slightly faster speed, the newfound accuracy still held.

"Now let's just really throw some spaghetti against the wall!" We set the metronome at 96. To her surprise, she still could do it quite accurately.

Coming back to 88 she said, "That actually felt so slow now!"

Haha! That was the plan!

"Now you can relax into that tempo, do all the musical things that you want to do, and feel under control during the 16th-note passages."

So in a nutshell:

November 6, 2021 at 05:30 PM · This is great teaching, because it starts the student at a point of frustration, takes a student through the entire process of correct practice (it's counterintuitive that you very often need to work things out at a slower tempo in order to exceed your original tempo goal), and then drops the student off back at the original goal, so they can see very clearly the fruits of their good practice.

I think that a big reason why a lot of students don't make progress is because they never get to clearly see a narrative of their own practice, and the cause and effect of their work, so over time, they lose hope in being able to improve, because they haven't internalized that good practice habits directly lead to results.

November 7, 2021 at 04:55 PM · Vivaldi A Minor is one of my all time favorites! I was so excited to learn this piece as a kid, and I still love playing it to this day. But I've transitioned to the non-Nachez version over the years to the bewilderment of one of my daughters who recently graduated from Book 4, so I had to re-learn the Nachez version again (solo passages) for her ..lol. Laurie gave some really great advice on how to learn this piece, especially with the Nachez version. I would like to add that knowing what an "A"minor scale actually sounds like will also help a lot :-).