October 19, 2021, 2:30 PM · Violin soloist Rachel Barton Pine announced on Tuesday that she will perform from a seated position for the foreseeable future, as her medical team has advised that she will be non-ambulatory for at least the next few years. 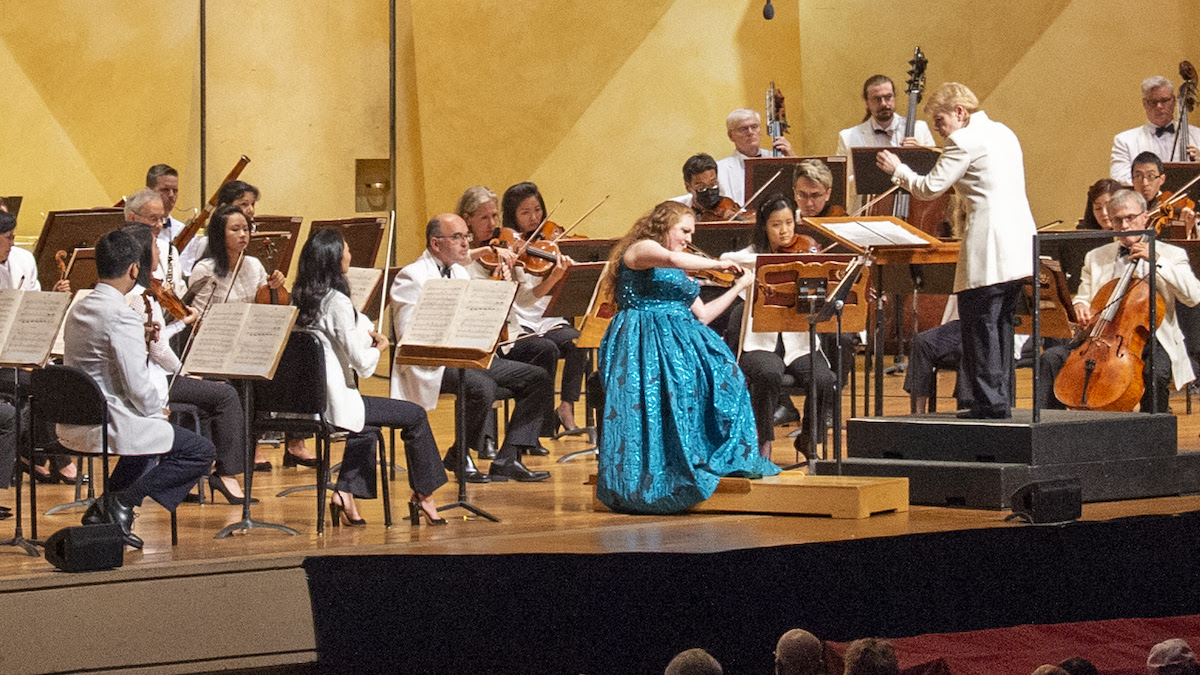 “These are medical setbacks," Pine said, "my ability to fulfill my life’s purpose as an artist remains unaffected. I’m sharing this information so the focus will stay on my music-making."

At age 20, Pine sustained serious damage to her lower limbs when her right foot was crushed and her left leg severed above the knee in a near-fatal Metra train accident.

Despite these injuries, Pine's violin playing was not affected and Pine has remained tireless in her activities not only as a performer but also as an advocate for the arts and educator. Her career as a concerto soloist has included performances with prominent orchestras around the world, as well as 40 commercial recordings, appearances on CBS Sunday Morning and NPR’s Tiny Desk, and features in the Wall Street Journal and New York Times.

To date, she has undergone more than 50 surgeries. Following an intense regimen of physical therapy, she had been performing standing for all of her solo appearances prior to December 2018, when she was unexpectedly hospitalized with a joint infection while on tour in France.

In July, Pine received acclaim for substituting with just three and a half hours notice for Midori as soloist in Prokofiev’s Violin Concerto No. 1 with the Chicago Symphony Orchestra and conductor Marin Alsop. This season, she has already appeared with Orchestre Symphonique de Québec, with the Mississippi Symphony Orchestra, and on a recital tour with harpsichordist Jory Vinikour. Her plans for the rest of the season include touring extensively throughout North America, including engagements with the Pacific Symphony and the Anchorage Symphony Orchestra.

Pine stayed busy during the COVID lockdown. From January through June 2021, she presented a weekly series entitled “24 in 24: Concertos from the Inside” during which, each week, she discussed a different great violin concerto and performed its entire solo part, live and unaccompanied.

far and away one of the best violinists violinists of her generation. I hope she can keep going forever.

October 20, 2021 at 09:37 AM · Hope she can keep on going. Like piannist Paul Wittgenstein and Def Leppard's Rick Allen, she's an inspiration for all musicians who suffer disability of some form or other.

October 20, 2021 at 09:36 PM · She played seated when we saw here ~15 years ago, and we'll see hear playing the Sibelius here on Saturday - it is the music that counts! She is a tremendous player and has a very unique and powerful sound.

October 21, 2021 at 10:24 PM · Knowing Rachel Barton Pine long before her Nightmare Metra Accident & T God she had grit to survive a horrendous set of complex Injuries we, here in Chicago, or some were informed

of, I'm truly saddened to learn of the RX from a superb Medical Team of NWM Hospital physicians and possibly elsewhere yet knowing the utter Grit & Steel in Rachel's Nature, I have great confidence amid Hope she will continue "carrying on" despite Whatever is yet thrown her way ~ A Chicago Native, RBP is a Midwest Tough and emboldened by many Gal, in our CSO {Chicago Symphony Orchestra} Community & CSOAA Alumni Association and all when Rachel was catastrophically struck down helped out immensely with then CSO Music Director, Daniel Barenboim, & Full CSO giving a Fundraising Concert, Twice Sold Out, to start gathering huge monies to cover insanely enormous medical costs & ongoing never imagined expenses her Mom and the rest of the Family were suddenly 'hit' by broadside ~ At the time, March 27, '95, Dennis Rooney, the Strad NY Editor, rang asking I write up Barenboim/CSO's Fundraising Concert, which I certainly did with Dennis Rooney flying into Chicago from NY to meet me in a balconey pair of seats with tons of paper to write on and write I did! After a very poignantly moving Concert, I went to see a very frail Rachel, hugging her Mom and gently - ever so gently, holding RBs cold hands ~ It was very upsetting plus beyond difficult to see a vibrant young violinist suddenly in a wheelchair being cared for 24/7 by I presumed, many Nurse's from our then famed Rehab Institute of Chicago, just blocks from my home here in the City. Three of us, all CSO violinists & myself {a former invited CSO member by Solti} poured over numerous colour photographs taken that night, finally mutually selecting those we thought the best for the Strad in London, to include ~ Oddly, I found my Comp Ticket to the Rachel Barton CSO/Barenboim Fundraiser in the Orchestra Hall Concert, stumbling upon it just a few weeks prior, remembering it all again, thinking, 'at least Rachel has come through this travesty, now married & with an adored child, now enjoying family life and playing!' Seeing Laurie's Violinist.com Headline made me cry. In Best Hands, medically, I'm hopeful her renewed Self, Mrs. Rachel Barton Pine, will play on with Guisto and for a very long time!! My warmest greetings go out to Rachel whom I intend to ring quite soon ~ May All be as well as Possible and Beyond so ...

Chicago submitted for All

October 22, 2021 at 04:42 PM · Isn't there something seriously wrong with the whole business if someone like her is forced to explain to the world why she has to sit while playing? I suspect that she has been playing standing to the detriment of her health just because the environment is so hostile to such accommodations.

This should be a learning experience for the wider concert culture.