October 15, 2021, 6:02 PM · Welcome to "For the Record," Violinist.com's weekly roundup of new releases of recordings by violinists, violists, cellists and other classical musicians. We hope it helps you keep track of your favorite artists, as well as find some new ones to add to your listening! 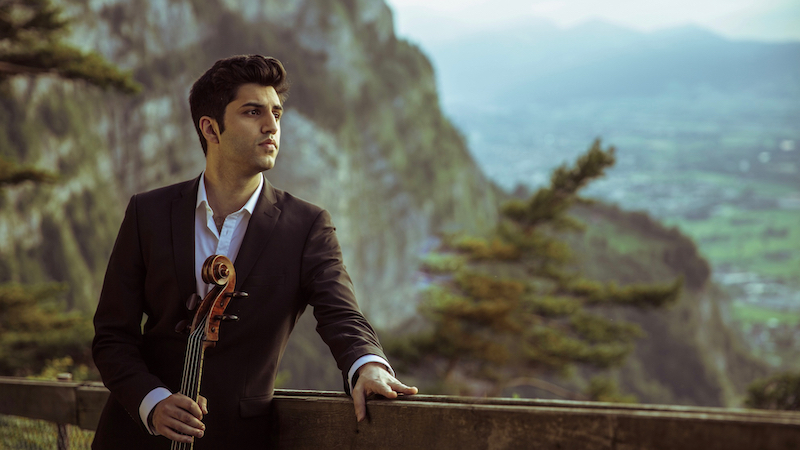 Cellist Kian Soltani's latest album is a voyage through movie music, with his personal take on themes from movies such as Pirates of the Caribbean, The Lord of the Rings, The Bourne Identity and The Da Vinci Code -- all reimagined for a supersized cello ensemble - played by Soltani on the 1694 "ex-London, Boccherini" Strad cello. "Everything on this album is made exclusively with the cello," Soltani said. Soltani recorded every track, all by ear, from the melodies to percussion sounds, orchestral chords and countermelodies. It was the pandemic that gave him the time to pursue "a dream I’ve had for many, many years, to create an album made exclusively from my own arrangements of epic movie scores." BELOW: "One Day" from Pirates of the Caribbean:

Christian Tetzlaff and Lars Vogt perform Beethoven's three Violin Sonatas Op. 30. Written in 1801 and 1802, they are relatively early works that nonetheless point towards the direction of Beethoven’s revolutionary Symphony No. 3, "Eroica," completed in 1803. BELOW: selections from the album:

Baroque violinist Johannes Pramsohler and his award-winning Ensemble Diderot present two world-premiere recordings of Jean-Marie Leclair and André-Joseph Exaudet, as
part of a new album focusing on the beginnings of the violin concerto in France. The album also includes music by Corrette, Aubert, and Quentin. In the first half of the 18th century, the Italian solo concerto was largely considered to be antithetical to the nature of French music, in as much as it represented the most extreme, innovative, and dramatic expression of the new musical rhetoric coming from Italy. IncFrance, the suite was the national art form in instrumental music – intimate, uncomplicated, and always with an eye toward elegant expression. However, over time the violin concerto rose to the fore and this album follows the journey of France’s contribution to the genre of the solo concerto with pieces that showcase how composers managed to combine Italian robustness and French elegance. BELOW: Concerto in E Minor, Op. 26 No. 4: IV. Carillon, by Jacques Aubert:

Violinist Lisa McNiven, who in the past created study aid recordings for Mazas Op. 36 Etudes Spéciales, has now created study tracks for three of the most-commonly studied violin concertos, with violin, piano, and click track, together and separate, at slow, medium, and full tempos. BELOW: Vivaldi Concerto in A minor, I:

With Resonance Lines, Collins created a tribute to people with whom she has had inspiring interpersonal connections, celebrating the rich collaborative worlds that lead to these works which are performed alone. The album features music by composers from the Baroque to the 21st century: Giuseppe Colombi, Kaija Saariaho, Caroline Shaw, Benjamin Britten, and a world premiere recording by Thomas Kotcheff. "That the repertoire on this album also highlights the voices of female, LGBTQ+, and multiracial composers reflects an intersection of identities which resonates with my own experience as a musician, artist, and person," Collins said. BELOW: Britten Suite for Solo Cello: