However on Saturday night, through a combination of fine playing, sincere music-making and thoughtful programming, violinist Anne Akiko Meyers and pianist Fabio Bidini had audience members dabbing their eyes and sighing "ah," during their recital at the Wallis Annenberg Center for the Performing Arts in Beverly Hills, Calif. 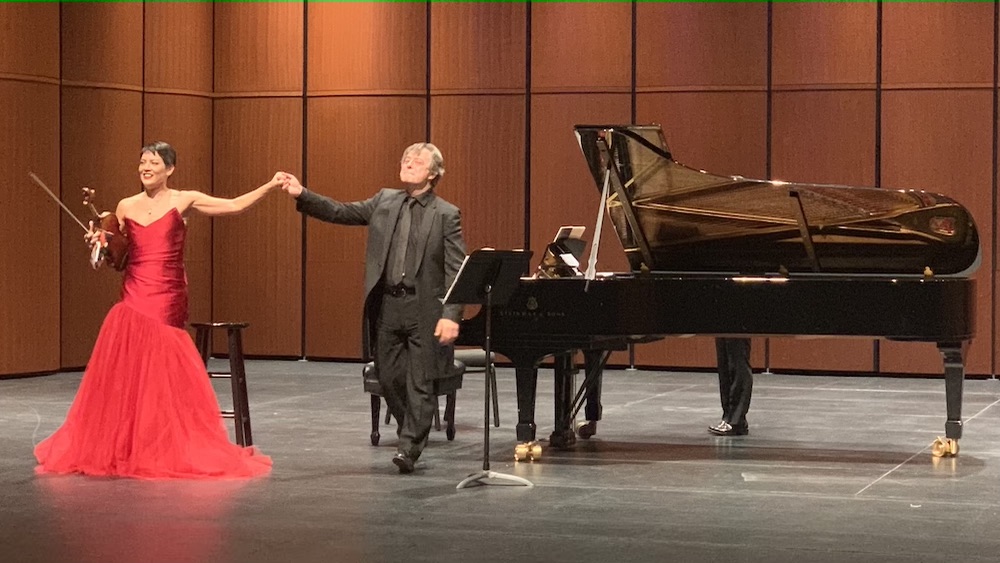 Violinist Anne Akiko Meyers and pianist Fabio Bidini on Saturday at The Wallis.

For me tears came from a feeling of connection, after all the isolation of the last two years. This wasn't the first concert I'd seen since the pandemic - though it was the first indoor concert back at the Wallis and the first for many in the audience.

But somehow this was the first where I felt connected to everything they played - connected as a violinist, as teacher, as a person living in Los Angeles, as a mother, as a human. Let's say it put me in a state of COVID catharsis that I'd probably been avoiding. Sometimes you don't want to cry, don't want to think about it all. For the first few concerts after things started opening up again, I just wanted to hear some music, to feel assured that live music still existed and would continue. I didn't necessarily want to "go there" and think about the sadness of the last few years.

This recital combined classics like Beethoven's "Spring Sonata" and Piazzolla's "Histoire du Tango" with some well-chosen moments of nostalgia that just "went there," like several violin arrangements of choral works by Morton Lauridsen, and the live premiere of Arvo Pärt's "Estonian Lullaby," written for Meyers.

At the beginning of the recital, Meyers walked out in her dazzling red dress and began with a piece that spoke to the once-student and now-teacher in me - a new arrangement of Corelli's "La Folia" by pops arranger Andy Poxon, commissioned by Meyers. Most violin students know "La Folia" as the first piece in Suzuki Book 6.

As Anne mentioned before the concert, "La Folia" is an age-old tune that was immensely popular in its day, going back to the 15th century. Its title refers to "folly" or "madness," and many composers have incorporated it in their own works: besides Corelli -- Lully, Scarlatti, Vivaldi, Geminiani, C.P.E. Bach, Liszt, Rachmaninov and many more.

As Meyers played the slow, simple tune that serves as inspiration for all the variations that follow, it sounded just like Corelli variations in Suzuki Book 6. In fact, for several variations, it remained largely in that same Baroque style. Then it started sneaking its way into new territory - an articulation there, some sul ponticello there, a bit of pizzicato, and suddenly we were moving into something that sounded more like Piazzolla, with sultry glissandi and bluesy harmonics. Now Corelli was in the nightclub, sliding into disharmony and back again. The end was a wonderful firestorm of double-stops and bravura playing. Where can I get this arrangement? (You can see Anne playing Poxon's arrangement by clicking here.)

Then came a complete change of pace, with Arvo Pärt's Estonian Lullaby. Meyers received the score for this piece, dedicated to her, around Christmas 2019, and in spring 2020 she released a recording of the work, along with a beautifully animated video full of watercolor images.

But Saturday was the first time she was playing it live, for an audience. Live performance brought out the simplicity of this music, as well as its long silences and sense of calm. The music is gently playful, with what sounds to me sweet little "cuckoo" calls (I thought of my German grandmother's clock, calling for bedtime). At the end, the music does not resolve so much as it trails off, the way consciousness flickers right before falling asleep.

While the current season is clearly autumn, Meyers and Bidini next played Beethoven's Sonata No. 5 for piano and violin -- the "Spring" sonata. Meyers explained before the concert that she programmed this sonata to convey a sense of "springing back to life" after the pandemic. Indeed, the sonata's sunny disposition felt like an expression of optimism for the future.

Here is where this pair showed off their powers of collaboration, with well-coordinated fast runs, strong melody-making and a mutual sense of timing that worked well. Listening to the gorgeous quiet passages in the second movement, I realized that Meyers has been playing the famous 1741 "Vieuxtemps" Guarneri del Gesù for nearly 10 years, and she clearly has learned its secrets, drawing on the many layers of sound and color in that extraordinary violin.

During the short intermission for this recital, I found myself talking with those seated around me. A woman named Judy told me that Meyers had helped her connect with her eight-year-old grandson, who had seen the violinist play at the L.A. Dodgers game the night before.

Indeed, just the night before this recital, Meyers was performing at Dodger Stadium, opening the game with the National Anthem. 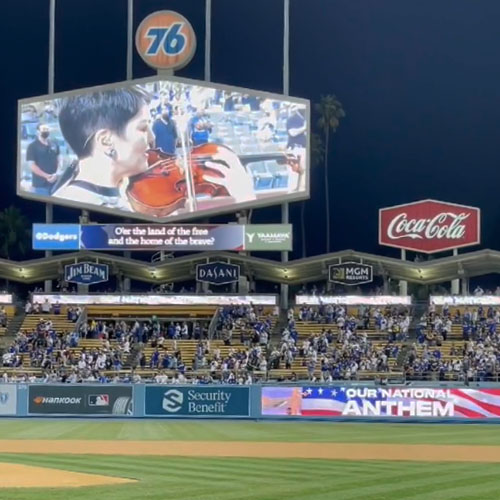 "You are going to see Anne Akiko Meyers?" the grandson asked his grandmother. "Yes, I know who she is, she played at the Dodgers game last night."

This is just one more sign that Meyers lives in Los Angeles, grew up here and remains connected. And really, it was after this intermission when the recital started to feel very personal for me.

That's when Meyers and Bidini played several songs by Morten Lauridsen, a local composer and faculty member at the USC Thornton School of Music who has created much choral music. His music is played everywhere, but it is much appreciated in his home town. Meyers had convinced Lauridsen to arrange several of his songs for violin and piano. She played a very heartfelt "Sure on This Shining Night." Then when she started playing "Dirait-On," I felt chills. Had I heard this before? Yes, I had. I'd heard my little freckle-faced son (now 21, then about 10) singing it in the Los Angeles Children's Chorus.

My thoughts turned to the magnitude of that experience for my son, surrounded by hundreds of other children, with all their voices uniting in this beautiful music. And then - how that all went silent for two years for the children in the choir right now. They are only just now beginning to sing in-person again and it's still difficult to manage with COVID. I felt a tear roll down my face. Then I noticed the woman in front of me take off her glasses and extract a tissue from her purse to dab her eyes.

A great many of us in the audience knew that music and had experienced it before. Meyers played it in a way that sounded like a human voice, calling back to a different time. I think she knew her audience when she programmed it, as well.

Thankfully Meyers didn't leave us in this state of nostalgia; she and Bidini ended the program with Piazzolla's "Histoire du Tango." In fact, the piece opens with the pianist drumming on the wood of the piano, and everyone laughed when he did so. The music was in turns rhythmic and driving, serious and slow, even a little lost and scary, but always a dance.

Meyers played several encores -- "When You Wish Upon a Star," an arrangement by Adam Schoenberg; and "Somewhere Over the Rainbow." Is that where we've been? Is this strangely colorized pandemic fever dream over yet? Maybe not, but at least the concert halls all over the U.S. are welcoming us back "home." It's a good feeling.

October 4, 2021 at 10:38 PM · Anne Akiko Meyers has a natural ability to connect with her audiences. Wish I could have been there!

October 4, 2021 at 11:39 PM · Laurie, this is so much more than a "review." It's a heartfelt expression of your experience. I only wish I could have been there with you... although I felt a bit like I was as I read your beautiful words. (And the dress deserves its own review. Wow! Love it!)

"Sigh!" As I read your review of Anne Akiko Meyers' performance and its effect on you, your words touched my spirit with Hope as well, especially enhanced by the Estonian Lullaby video.