January 23, 2021, 8:16 PM · By now most the classical music community knows and embraces the music of Erich Wolfgang Korngold (1897-1957), who was famous shaping the direction of Hollywood movie scores in the early days of film. He is also celebrated for his shimmering 1945 Violin Concerto, which over the years has been criticized for adhering to a Romantic style or "sounding like film music" -- but to this day continues to grow in popularity with audiences and critics alike.

Here's something I didn't know about Korngold, though: he was something of a child prodigy. In fact, among the works that he wrote as a teenager in Vienna was his Sonata for Violin and Piano - his "Opus 6," written at age 16.

This work, as well as a violin sonata by fellow Jewish film composer Eric Zeisl (1905-1959), are the inspiration for a new album by violinist Johannes Fleischmann - also from Vienna. His album, called Exodus - the Men Who Shaped Hollywood, also contains two other early Korngold works, performed with pianist Magda Amara and baritone Günter Haumer. 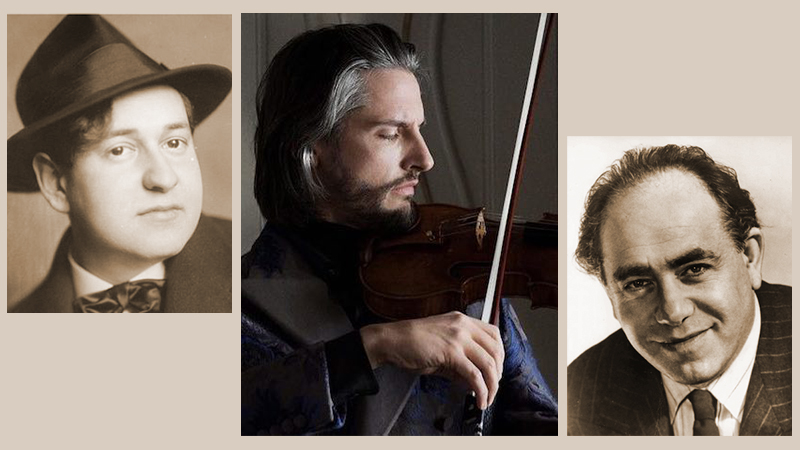 Korngold's early Violin Sonata is actually what led Fleischmann to the works of Zeisl, at least indirectly. After performing the sonata in Los Angeles in 2014, Fleischmann met an audience member named Barbara Zeisl Schoenberg, whose father - the above-mentioned Viennese composer Eric Zeisl, had been friends with Korngold when both were living in America, both exiles from a Europe then hostile to Jews.

Once Fleischmann learned of Zeisl's "Brandeis" Sonata for Violin and Piano - depicting his flight from Vienna and sorrow over the loss of his parents in death camps - he knew he must record it.

Not only that, but Fleischmann's aim in creating this album seems to be as much to document the lives of these two composers as to perform their works. The physical CD contains extensive and well-written liner notes by Fleischmann himself as well as Barbara Zeisl Schoenberg, Jessica Duchen and Karin Wagner. And in premiering the album, Fleischman assembled a panel of experts and historians to discuss the music, composers and historical context in a livestream concert of the pieces on the album. (The video for that was available for just three days, unfortunately!)

Earlier this week I talked with Johannes via e-mail about his own history with the violin, as well as the making of this album.

Laurie: How old were you when you started playing the violin, and what made you want to do so?

Johannes: I grew up with two musicians at home - my mother is a professor for voice at the music university in Vienna (MDW) and my father is a double bass player at the Vienna Symphony Orchestra. I actually used to climb his double bass when I was a baby. It must have been around the age of four, that my father introduced me to a colleague with the words: "Johannes, come here! This will be your new cello teacher!" My response was, "But I want to play the violin!" That was apparently the moment I decided to become a violinist. I got the chance to start lessons when I was five.

Laurie: How did you first encounter the music of Eric Korngold - was it through his violin concerto, or other music? What speaks to you about his music and his story?

Johannes: That is a good question, honestly I can’t remember the exact moment Korngold caught my attention. I guess it was a combination of his orchestral works and chamber music as well as influence on modern film music. When I was a teenager, I learned that John Williams was inspired by Korngold’s music, which definitely played a role in my deeper interest at this time, since I loved and knew Williams’ film scores from my childhood. After reading Korngold’s biography by Brendan Carroll ("The Last Prodigy: A Biography of Erich Wolfgang Korngold"), I was digging into his chamber music and started to learn repertoire. On top of that, the violin concerto is of course one of my favorite works of Korngold.

Laurie: Tell me about meeting Barbara Zeisl Schoenberg, and about her involvement in your album "Exodus."

Johannes: When I played Korngold’s violin sonata in 2014 in the Villa Aurora near Los Angeles, she sat in the audience and talked to me after the concert. Barbara told me her father’s story and invited me to her house for coffee, Vanillekipferl and Sachertorte. After deciding to combine Zeisl’s Brandeis sonata with Korngold's works on a CD project, I asked Barbara to write an essay for my booklet and to translate the booklet text of Karin Wagner (author of Zeisl's biography) from German to English. She happily agreed, and I am very grateful for all her involvement in the project.

Laurie: Once you heard the music of Eric Zeisl - what made you want to commit yourself to a project involving his work? What do you find compelling and/or original about his music?

Johannes: I learned very late about Eric Zeisl. Before I met his daughter, I only knew his name from recordings of his songs - the defining moment was the introduction to Barbara, actually. I found his tragic story so incredible, and since only very few people know about him as a composer, I decided to shed light on his story. The Brandeis sonata itself is a very rich piece of music, the three movement are totally different in character and are telling emotionally a great story itself about the composer. For example the second movement, "Andante religioso (hebraique)", is written in an extremely profound manner. He spoke about it as a conversation with God, also he connected that movement to the murder of his father in a concentration camp. Contrary to this, the last movement „Rondo“ is, in my opinion, a celebration of life, full of optimism for the future.

Laurie: Why did you call the album "Exodus"?

Johannes: "Exodus" originally thematized the "Departure from Egypt" (in a biblical sense), much like many people of Jewish descent in Austria had to leave or even flee the country during World War II to survive. Los Angeles, or the USA in general, was a safe haven and even a new home for many. Among others, Eric Zeisl had the possibility to find for his family a new life and a place to work, even though it was very difficult, since he arrived very late in California in 1942. The quote "The men who shaped Hollywood" stems from both their influence on film music, especially Korngold winning two Oscars and having a big impact on many generations in the business after him. Eric Zeisl really found hisself as a composer in Los Angeles and brought the Jewish idiom into his music. He was one of the first important composers in Jewish classical music in California.