September 30, 2020, 3:02 PM · Telling the stories and sharing the music of refugee and immigrant communities -- this is the passion that led violinist Timothy Chooi, cellist Drake Driscoll and violist Sarah Sung to create a project called The VISION Collective, which tonight will receive the prestigious Robert Sherman Award for Music Education and Community Outreach. 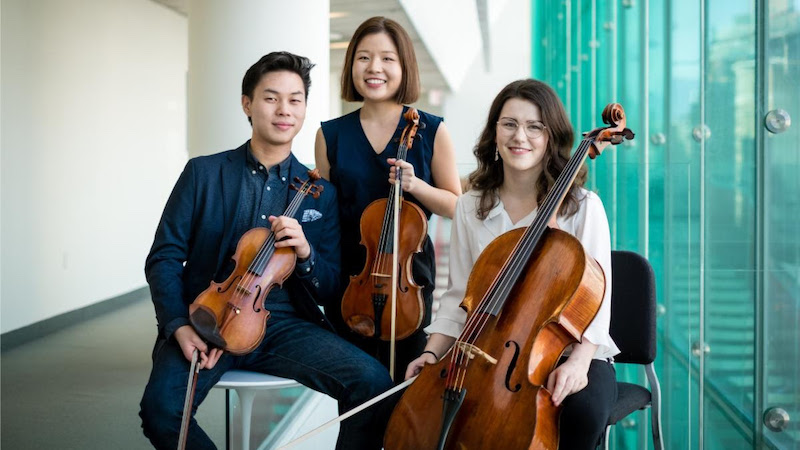 "The three of us met through the Chamber Music Community Engagement class at The Juilliard School," Chooi said. "Drake, Sarah, and I immediately clicked when we began talking about immigration. It has been a very sensitive political climate in recent years, and it has affected all of us personally. All three of us have some sort of a history of immigration to the U.S.; for me, it is that I moved to the U.S. to pursue my musical education. Music has been the most meaningful way for me to share my own personal story of coming to the States, and it has given me purpose in my life. In VISION concerts and workshops, we bring migrant stories to life through music while forming relationships with people from all over the world. This project holds a very special place in my heart. Our work is important, now more than ever."

Founded in 2018, the VISION Collective initially started as a trio, then when more colleagues wished to join, they became a collective with eight performers and eight composers from around the world, including alumni and current students at Juilliard, the Manhattan School of Music and New York University.

Tonight the three founders will receive The Robert Sherman Award for Music Education and Community Outreach, given annually to students and alumni of The Juilliard School's Music Division. Normally $10,000, the award was doubled to $20,000 this year, in acknowledgment of the pandemic's economic consequences. The award ceremony, which will also feature the group in performance, will air tonight at 9 ET on WQXR - click here to see it.

"I've had first-hand experience with how music can alleviate the stress of assimilating into a different culture," said Chooi, who is from Canada. "It wasn't easy to adjust to a new system and culture, but music has always been a place for me to remove any boundaries and feel at home to express my emotions, tell my story and connect with people. Music represents history, events, and culture, and I think it's so beneficial for all of us to not only be exposed to this, but also to present the opportunity for everyone to make music. We want to help immigrants and refugees connect their lives and the stories of their cultures through music, so that they feel cherished, as we have been so lucky to have felt."

Why did they call themselves "The VISION Collective"?

"We chose this name because we had a huge vision of bringing immigrants and refugees around the world closer together through music," Chooi said. "There are a lot of challenges that one goes through when adjusting to a new country, and we want to be an organization that can provide music as a meaningful connection to bridge that gap, making them feel recognized, valued, and celebrated as individuals."

To that end, their workshops are designed for interaction. Members of The VISION Collective first immerse themselves in talking with members of the communities, then create concerts based on the stories, music and culture that they discover, with composers arranging music specifically for that community. Over the last two years, The VISION Collective has performed at three refugee camps in central Germany and also performed in numerous benefit concerts to raise money for hunger relief and educational initiatives in the United States and beyond.

"Our work is centered around two main goals," violist Sung said. "The first is to use music to highlight refugee and immigrant voices and stories, raising awareness for the global refugee crisis. The second is to bring individuals from all walks of life together to create diverse and meaningful art. Personally, I believe that music should be accessible to all, and it is our job as musicians to bring music outside the concert halls to communities that may not have the privilege of enjoying and pursuing music. Music has the ability to unite, and VISION uses this power to foster a sense of community and improve the emotional well-being of refugees in camps."

The VISION Collective has also created a number of videos highlighting an immigrants' stories, as well as the music that VISION arranged for them. They can be found on the group's YouTube Channel and Facebook page.

With the award money, the group plans to record its first album of music by refugee and immigrant composers and to fund two trips: one to German refugee camps and another to refugee camps in Athens, Greece. Both trips had been planned for 2020 but were rescheduled due to COVID-19.

"We plan to continue these workshops over the next few years, eventually taking on a more permanent role in refugee camps, and fulfilling our long term goal of establishing sustainable music programs in refugee camps around the world," Driscoll said.

Past recipients of the The Robert Sherman Award for Music Education and Community Outreach include violinist Alice Ivy Pemberton in 2019; violinists Jocelyn Zhu and Mariella Haubs in 2018 for their Concerts for Compassion; and violinist Ariel Horowitz in 2017.