September 25, 2020, 1:31 PM · Welcome to "For the Record," Violinist.com's weekly roundup of new releases of recordings by violinists, violists, cellists and other classical musicians. We hope it helps you keep track of your favorite artists, as well as find some new ones to add to your listening! 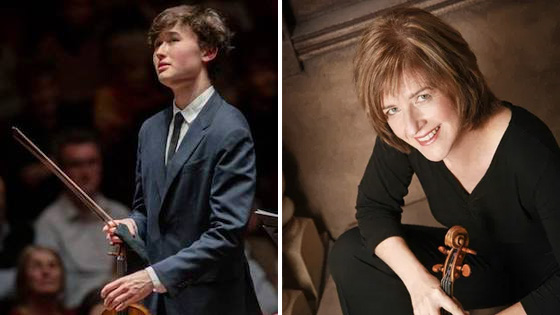 Another tribute to Beethoven in this 250th anniversary year: the fantastically talented young violinist Daniel Lozakovich has recorded Beethoven's Violin Concerto. The new recording was filmed live in Munich’s Gasteig Philharmonie in December 2019 -- just months before live performance became difficult and rare, with venues shut down and orchestras silenced due to the global pandemic. "There’s a particular magic about a live concert," Lozakovich said. "The audience creates a unique atmosphere, without which, in my opinion, it’s almost impossible to produce a performance that will stand the test of time." This is Lozakovich's third recording for DG, the others being None But the Lonely Heart in 2019 and Bach Concertos 1 and 2 in 2018. BELOW: Daniel Lozakovich performs the second-movement "Larghetto" from the Beethoven Violin Concerto with the Munich Philharmonic, Valery Gergiev conducting:

Baroque music is often played on period instruments, but it's a little more unusual to hear late classical music given a historical approach. That is exactly what violinist Jerilyn Jorgensen and pianist Cullan Bryant have done in their new recording of Beethoven's complete Piano and Violin Sonatas. "Using original instruments...sparked profound insight into Beethoven's intended sound palette," Jorgensen said. "It brought us renewed commitment to build interpretations of these masterpieces from the ground up." Jorgensen played on an Andrea Carolus Leeb violin built in Vienna in 1797 -- a rare example of an 18th-century violin that retains an early neck set. She also used a number of historical bows. Bryant played on five different keyboard instruments from the Frederick Collection of Historic Pianos in Ashburnham, Mass. "These instrument choices highlight Beethoven's evolving style," said Jorgensen, "bringing the listener on a journey from his crisp earlier works to the brink of his introspective late period." BELOW: Jorgensen and Bryan perform Violin Sonata No. 9 in A major, Op. 47, "Kreutzer," movement 1:

September 25, 2020 at 08:54 PM · That Lozakovich fragment is very very beautiful. He has some kind of very refined but "filtered" sound, don't know how to describe it. Very very different from, say, Bomsori Kim, although I am also a big fan of her. Who said that all violinists sound the same? ;-)

September 25, 2020 at 08:58 PM · They don't, not at all. The first time I heard Lozakovich was when he was very young, playing at the Menuhin Competition. He has such a natural musicality. Very special player.

September 26, 2020 at 01:13 AM · What a wonderful tribute to Beethoven! I am stunned by Daniel Lozakovich! 19, really?? And Jerilyn Jorgensen and Cullan Bryant playing Beethoven on a period instruments is quite eye-opening. Beautiful! I look forward to purchasing both recordings.