September 22, 2020, 1:15 PM · When violinists Paul Huang and Danbi Um found themselves locked down in their Manhattan apartment during the pandemic last spring, they weren't entirely alone. In fact, they were in good company -- with each other, of course, but also with two of the finest Italian violins around: the 1742 "Ex-Wieniawski" Guarneri del Gesù and the 1683 "Ex-Petcheks" Nicolo Amati.

"Both are very different sounding violins, but in many ways so complementary to each other," Paul said. So these two award-winning artists did the logical thing -- they filled the apartment with music, playing together "more than we used to -- because this is our only source of playing music with people, since we are in the same 'pod.'"

On Friday they will bring that music to a broader audience when they perform a recital on Dreamstage Live with pianist Amy Yang. (Click here to buy $25 tickets). The recital takes place live at 8 p.m. Eastern, 7 p.m. Central, 6 p.m. Mountain and 5 p.m. Pacific time. Dreamstage Live is an HD streaming concert service designed in part by cellist Jan Vogler with the aim of helping artists continue to earn a livelihood while performing online.

Paul and Danbi, a romantic as well as artistic pair, met through Chamber Music Society of Lincoln Center, when they were accepted to the Bowers program in the same year.

During the pandemic, they found their lives suddenly very different. "Like everyone, concerts have been cancelled since mid-March and probably will continue to be this way until at least early 2021 in the U.S.," Paul said. "I must say, I don't miss traveling, but what I do miss is the music making with other colleagues and creating sounds together. I do also miss being on stage and communicating with listeners live."

"I have been staying home like everyone else, but finding simple joys which I don't get normally when I'm on the road all the time," Paul said. "I used this time to remodel my apartment, improve my cooking skills, learn new pieces that I never would have touched, and certainly to get more advanced in technology which we are all forced to learn!"

"One of the things that I did with technology was to record with my duo partner Helen Huang," Paul said. (The two have the same last name but are not related.) "We recorded a few selections of encore pieces from our respective homes, then we patched them together. Who knew this was going to be part of the chamber music playing skills these days, to play with colleagues virtually!" (Below: Paul and Helen Huang play Jamaican Rumba by Arthur Benjamin.)

For Danbi, she suddenly found herself changing from a night owl to a morning person. "It’s a new world that I didn’t know existed," she said. "With the now-added two hours in the morning, I spend time journaling, reading, and learning and practicing calligraphy. I have just begun to learn the art of copperplate flourishing, which is fun, albeit difficult. Being in a state of 'flow' happens when you can concentrate completely on one task that is challenging but within reach, and I really cherish that - having found the right time of the day and the right hobbies to do. Now that I have changed my sleeping patterns, even if I become anxious and stressed out during the day, I can savor that early morning peace and calmness. I will have to think about how to continue all this, once concert life comes back. Our job usually requires us to be night owls!"

While performing opportunities have been rare during the pandemic, Paul and Danbi have found them here and there.

"There have been several concerts in smaller scales over the summer, all of them in outdoor settings, with some of the broadcasts are online too," Paul said. "We both participated in the Music Never Sleeps NYC, a 24-hour music marathon, back in April. That was a lot of fun."

In October, Paul will be able to travel to Asia for some in-person concerts, as well.

"I'll be going to Taiwan next month where I'm the Artist-in-Residence of Taiwan National Symphony Orchestra this season," he said. "Concert life is back to normal in Taiwan, and I feel very lucky that I can play live concerts with orchestra for 2000 people in the concert hall!"

For Friday's performance on Dreamstage Live with pianist Amy Yang, the violinists will play separately, as well as together. "It's a collective effort from all of us," Paul told me. "From my end, I contributed the Mendelssohn F Major Violin Sonata. It's a piece I think should be played more often. Mendelssohn wrote it around age 29, just few years before he died. He never completed the sonata and therefore was never published. It was until 1954 when Menuhin rediscovered this piece and revised a small section of the sonata which Mendelssohn never completed."

Together, Paul and Danbi will play the Moszkowski Suite and Sarasate Navarra -- "two great works that are the highlights of the violin duo repertoire," Paul said. 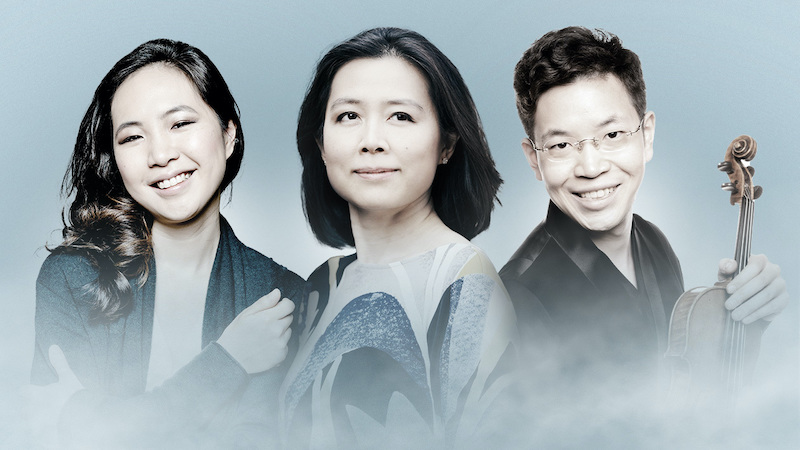 Danbi said that "I gravitate toward pieces that have ethnic flavors, and I wanted to play something Gypsy this time around. There are a few artists that are my absolute favorites, such as Elman, Kreisler, Menuhin, and Ferras. Their playing is full of pathos and yearning. When I hear an unfamiliar work on any of their recordings and their playing gives me goosebumps, I immediately look for the sheet music and try to learn it." To that end, she will perform Hubay's "Scenes de la Csarda" No. 3, Op. 8 and Dohnanyi's "Gypsy Andante" from Ruralia Hungarica.

For the concert, they'll also be joined by American Public Media's Performance Today radio host Fred Child, who will lead a live interview following the concert.

September 23, 2020 at 04:23 AM · Question about Dreamstage: Are the violinist and the pianist performing at a distance from their own homes or will they be together to play? The former would result in serious lag problems.

So they will be in the same room. He also said he hopes you can tune in! :)