September 8, 2020, 3:10 PM · Heading into fall, performing artists continue to work around the limitations brought on by a long-lasting global pandemic, releasing performances on the Internet, connecting with audiences via livestream shows, offering in-person performances that are outdoors and "distanced." This week I've found beautiful performances, plus a little history, and a few things to make you laugh: Augustin Hadelich performs a breathtaking Brahms sonata; violinist Rachel Barton Pine demonstrates (with help from daughter Sylvia) the instruments that pre-dated the violin; fiddler Andy Reiner and friends play atop Colorado's highest peak (how did they get the cello up there?); Heifetz Institute alumna Julia Angelov plays a Bach fugue; Roberts Balanas does some brilliant looping; the NY Phil Bandwagon project premieres a piece that is actually called "Loop"; and members of the Goat Rodeo make music out of an argument over coffee. 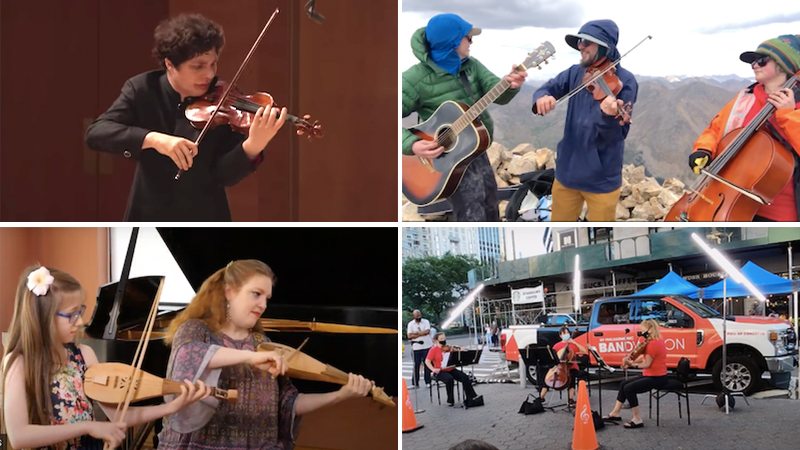 Violinist Augustin Hadelich and pianist Orion Weiss performed Brahms Sonata No. 2 in A Major, Op. 100 earlier this summer as a part of the 2020 Tanglewood Online Festival, and they just posted the video this week. Of Brahms' three sonatas for piano and violin, this one to me seems the most interactive between the two instruments, and it absolutely does not "play itself." Is is just gorgeous in the hands of these two thoughtful and accomplished musicians.

The Violin and its Ancestors

Rachel Barton Pine is a true connoisseur of the violin's early relatives, having collected a host of rare and unusual stringed instruments over her lifetime. Here she explains the evolution of the modern violin by demonstrating three of its ancestors: a medieval rebec, a renaissance-style violin and her 1770 Nicolò Gagliano baroque violin. She plays musical hits from the 1300s, 1600s and 1700s, with a little help from her young daughter, Sylvia. What a treat!

This is taking outdoor performance to the extreme...Andy Reiner is known for playing his fiddle on top of mountains, and also playing while skiing down them. (A few years ago I was going to join him and his wife Joy for little summit jam but our timing didn't work out!) This time they have really outdone themselves; how on earth did he, Joy Adams and Colin McKinley make it to the top of the tallest mountain in Colorado -- 14,433 foot-high Mt. Elbert -- with a cello, guitar and fiddle? Having been atop a "fourteener" as they call mountains higher than 14,000 feet, I also have to ask, how did they breathe? Move their fingers in the cold? Somehow they did, and here's their jam from the "top of Colorado":

Despite the popularity of the "Fuga" from Bach's Sonata No. 1 in G minor, I remain amazed by the idea that one can perform a three-voice fugue on one solo violin. Violinist Julia Angelov, playing from Washington D.C., makes it look easy, with this performance she did for the Heifetz Institute's Chock Full o' Bach series, which is posted at 9 a.m. ET every Sunday on YouTube. Angelov is a Heifetz alumna and Heifetz on Tour artist.

It's the latest from London-based violinist Roberts Balanas, who made headlines last summer with his virtuoso rendition of Elton John's 'I'm Still Standing' and also appeared right here on Violinist.com with Gil Shaham and me on Gilharmonic, where he premiered his ACDC "Back in Black." Here is his electric violin and loop pedal rendition of "Dance Monkey" by Tones And I - it's pretty mesmerizing to watch him build all those layers!

On Aug. 30 a small group of New York Philharmonic musicians launched the orchestra’s first public performances since March, a pop-cup concert series called NY Phil Bandwagon. The first one featured the World Premiere performance of "Loop" by Carlos Simon, who is the winner of the 2021 Sphinx Medal of Excellence. Performers included violinist Yulia Ziskel, cellist Sumire Kudo and violist Cynthia Phelps, who played at Dante Park near Lincoln Center. "COVID-19 has forced my daily regime into a seemingly never-ending loop," Simon said. "My piece, 'Loop,' represents my mundane, day-to-day life for the past four months."

My Coffee Was Made by Angels

The Goat Rodeo - a dream team consisting of cellist Yo-Yo Ma, fiddler Stuart Duncan, mandolinist Chris Thile and bassist Edgar Meyer - took their latest Not Our First Goat Rodeo show to NPR's Tiny Desk, and below is the result. I related to the first tune on their set "Your Coffee Is a Disaster." As Thile explained, "One person's coffee is often another person's disaster." Apparently the musicians have a morning tradition of berating each other's coffee, with half of them preferring beans that have been roasted for centuries in a volcano vs. beans fashioned by angels. Whether you like Folger's instant coffee or Peet's espresso, you can enjoy these three jams, which also include "Waltz Whitman" and "The Trappings."

With large-scale concerts and symphony performances almost universally on hiatus, our weekly roundup has switched focus from concert reviews to the many different ways that artists, orchestras and educational institutions are continuing to keep the music going. If you’d like to share links of socially-distanced performances, new performance videos, teaching experiences, or master classes you’ve enjoyed, please do so in the comments or email Laurie for possible inclusion in a later opus.