September 2, 2020, 12:36 PM · This week violinist Vadim Gluzman has been feeling better than he has in a long time -- "I'm even doing something that I was trained to do..." That is: play as a violin soloist, in live performance.

It's not easy to manage that, in the middle of a global pandemic, but Gluzman has taken the first cautious and elaborately planned steps to do so, both as a featured performer and as the artistic director for his own festival, the North Shore Chamber Music Festival, which gets started next week. 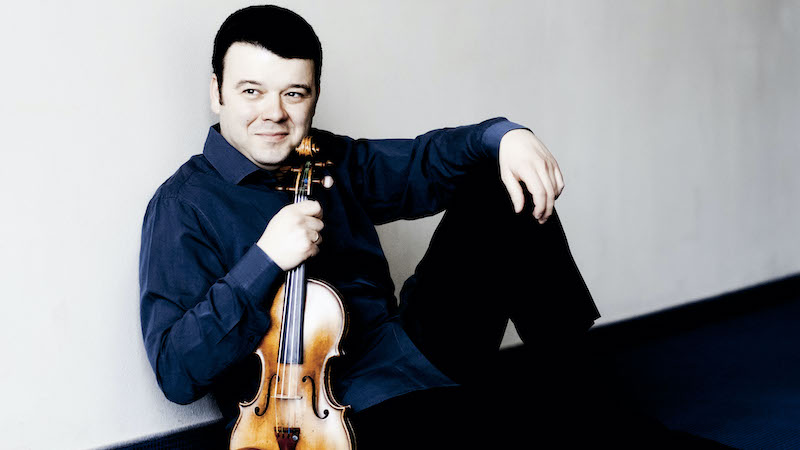 For his first post-pandemic live performance, he had to travel across the world. On Aug. 14, Gluzman (who plays the 1690 "ex-Auer" Stradivari on loan from the Stradivari Society) performed an all-Beethoven concert for the Leopold Auer Festival in Veszprém, Hungary, where the state of the pandemic is very different than it is the United States. "You almost would never know that anything is going on," said Gluzman. "It was a packed concert hall, with some people wearing masks, mostly older people. They sold seats, one next to the other. The country required me to bring the results of two tests that I had to do within five days - negative tests, of course. I had to travel on a cross-Atlantic flight in a mask - I can't say that that was the biggest pleasure of my life! But at the end of the day, I love playing the Beethoven Concerto, so I am ready to fly in a mask."

This week he is back in the U.S. for another set of live performances: outdoor, socially-distanced concerts for Pro Musica Chamber Orchestra SummerFEST, in Columbus, Ohio.

And next week comes a third event, this one very close to his heart: on Sept. 10 and 11 the North Shore Chamber Music Festival (NSCMF) will perform two live concerts as part of its onstage/offstage series. NSCMF is the festival that Gluzman and his wife, pianist Angela Yoffe, founded 10 years ago, north of Chicago, and both of them will be performing. A third concert is scheduled for October 17, featuring Philippe Quint's "Charlie Chaplin’s Smile." The performances will take place at PianoForte Chicago, both in-person with distancing protocols, and online, with tickets good for 48 hours after the performance is streamed (for information on concerts and tickets click here).

"It really shows that where there is a will, there is a way," Gluzman said, talking over the phone from Columbus, between performances that were all live, and all sold-out. "Speaking with the audience yesterday, you could see how thankful they were to be back in audience seats. They were just has happy as we were, playing in front of them."

Indeed, it takes considerable will - as well as planning and work -- to meet all the conditions to stage an in-person concert in 2020. Yoffe has been on the phone 15 hours a day, planning the logistics for the NSCMF onstage/offstage concerts.

"Angela had to go to great lengths, planning how it will be done, how many people can be there, all of this," Gluzman said. "Of course, it all comes down to common sense. At the end of the day, this is not rocket science."

For a decade, Gluzman and Yoffe have been holding the North Shore Chamber Music Festival at Village Presbyterian Church in Northbrook, Illinois. In fact, the church itself is what inspired them to create the series.

Before they had their own festival, "we would travel and participate in dozens and dozens of festivals," Gluzman said. "Some of them we loved, and some of them we didn't -- as it always is. From time to time we would talk and ask ourselves, 'Wouldn't it be lovely to start something of our own?'"

Then one day, on the way to the grocery store near their home in Chicago, "we stopped at the traffic light, and I said, 'Look at this church!'" It was a church they'd passed hundreds of times, for many years, but this time they saw it differently. "Sometimes you do things before you even know you are doing them - I parked, right away. We went into the church, and the first person we met was their director of music at the time. Nine months later, we had our first festival!" Gluzman said. "It's as if somebody orchestrated all of it: they made us pay attention, made us get out of the car, made us go into the church -- and then had the music director waiting for us. It was one of those strange moments."

"The church itself -- it's as if somebody built it just for playing music - acoustically, it's spectacular." By now, the festival has grown to three concerts per summer, with masterclasses and even a scholarship program for young artists.

This year, though, they were not able to hold the festival in that beloved church, as they had planned. "Everything was ready, programs were printed - tickets would have gone on sale in March," Yoffe said. "When the pandemic started, of course they could not even tell us if that would be possible."

With so many restrictions in place, it turned out not to be possible. Gluzman and Yoffe wondered, how and where could they stage their festival, now in its 10th year?

It all started to come together in June, when they visited the studio of PianoForte, a piano dealership with a showroom full of pianos, a concert hall and a recording studio. The organization has long been a supporter of NSCMF, bringing pianos to the church for the festival. "They have a beautiful building in downtown Chicago -- we went to record a recital for a festival in Ireland, where we would have been if not for the pandemic," Gluzman said. "We loved the space, and they were set up with cameras and microphones - they were ready to stream."

"Somehow, being there, seeing this, and speaking with the owner - we said, 'Why not try?'" Gluzman said. At first they thought the NSCMF concerts would be only online, but now, with guidelines that permit in-person concerts, they will also perform for an in-person audience at PianoForte. "There will be a limited amount of people - 35-40 at most, in a space that can seat up to 100 under normal circumstances. All precautions will be taken: sanitizers, masks, etc. And if people don't have masks, we will provide them."

The concerts also will be streamed, in order to reach those who are not ready to venture out, as well as people in other cities, who would not otherwise be able to see it.

"The people who buy tickets for the streaming will have 48 hours from the time of the concert to view the concert, in order to accommodate all the time zones," Gluzman said. "We already have people who bought tickets in Australia, in Korea, in Japan - so we want to give them some comfort to watch the concerts."

Next week's concerts include Jewish Kaleidescope on Sept. 10 and Love Triangle on Sept. 11.

"Both Angela and I are Israeli, and we are Jewish," Gluzman said. "We thought, maybe we should celebrate and represent our own culture. This is simply music by Jewish composers. Some people don't realize that composers such as Darius Milhaud or Maurice Ravel were Jewish. So we are starting with the gorgeous 'Suite for Violin, Clarinet and Piano' by Milhaud. Then cellist Mark Kosower will play Ravel's 'Two Hebrew Melodies,' a very special piece that contains the well-known 'Kaddish.'Angela and I will play the entire 'Baal Shem' Suite - most people know 'Nigun,' but how often have you heard the whole suite, all three pieces? It is absolutely fantastic - all three pieces are just as strong as 'Nigun.'"

They also commissioned Israeli composer, Avner Dorman, who lives in the U.S., to write a piece. Scored for violin, clarinet, cello, and piano, the piece is called Dancing with the Tora at Mount Meron. "It's based on a beautiful painting by the same name, by Israeli artist Reuven Rubin," Gluzman said. "Avner is a great talent - just last season the Chicago Symphony premiered his Percussion Concerto."

For the second program on Sept. 11, "we will play the music of the most famous love triangle in classical music: Robert Schumann, Clara Schumann and Johannes Brahms," Gluzman said. The program includes a piece from each composer: Robert Schumann's Three Fantasy Pieces for Clarinet and Piano; Clara Schumann's Three Romances for Violin and Piano; and Brahms' Op 8, Piano Trio No. 1 in B major.

For Gluzman, the Romances by Clara Schumann are new in his repertoire. "I have to say, I'm melting as I'm playing them. They are so gorgeous, unbelievable." The two concerts feature Gluzman and Yoffee, as well as pianist William Wolfram, cellist Mark Kosower and clarinetist Ilya Shterenberg. "We can't even imagine the festival without them," Gluzman said "We know many people who go to concerts just to hear them play, not just to hear certain repertoire. They have a steady following at the festival."

A October 17 concert will feature Philippe Quint's multi-media performance and presentation of "Charlie Chaplin’s Smile." (More on that in an upcoming interview with Philippe.)

"Our festival has always been about friendship, and we wanted to see friends, see our audience from around the world," Yoffe said. The onstage/offstage format will allow audience members to submit questions that the performers can discuss during the concerts. And they plan to be extremely strict with the protocols for the live portion of the concert: requiring masks and limiting the audience to allow for proper distancing. "I want people to be secure and comfortable and safe," Yoffe said. "I want to show them that it's possible to hold this kind of event, that it can be normal -- at least normal for now. I'm hoping to continue that."