August 25, 2020, 11:55 PM · When one decides to attend a classical concert, one buys the tickets, puts the time and date on the calendar, leaves early, drives to the venue, pays for parking, finds the seat with a few minutes to spare-- then at last, it's possible to enjoy the wonderful artist that inspired all this planning. It's different for an online concert, but maybe we should think about making some of the same kinds of commitments when it comes to time, attention and financial support.

I decided to go ahead and do that, in order to see an online concert on Monday that featured Gil Shaham, his wife Adele Anthony and pianist Eri Kang - definitely a great line-up. I also wanted to check out the new online venue Dreamstage, which has promised to be a different kind of online concert experience, with the possibility of watching on a big-screen living room T.V., plus other features like audience feedback, a green room for meeting artists and more. On Sunday James Ehnes played a concert on Dreamstage, and upcoming featured violinists include Kevin Zhu on Sept. 5 and Nathan Meltzer on Sept. 18. 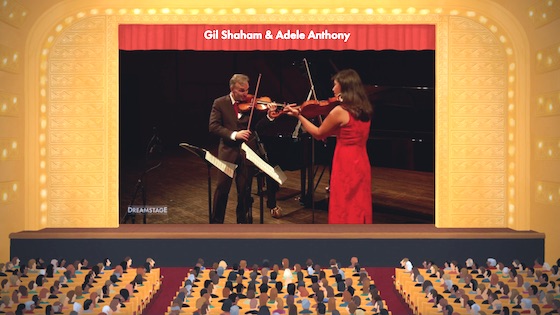 Dreamstage is committed to the live, one-time concert -- and as with a live concert, you don't get to play it back at a later time. I like that idea, after all, we do show up for live concerts and commit to that time frame. But in this case it was somewhat limiting, as the concert took place at 11 a.m. on a Monday, Los Angeles time. The night before the concert, I got a text from the mother of a young Gil Shaham fan, Grant, 10, who had participated last summer in our Gilharmonic on Violinist.com master classes with Gil and me. Grant and his mom really wanted to see the concert, and I think they would have paid the $25 to see it, had there been an option to watch later. But it was his first day of online school, and a work day for her - no way to see an 11 a.m. concert. Perhaps the timing was for a different time zone - these are the issues with online concerts!

Nonetheless, it was a lovely concert and I was happy for the opportunity to virtually attend a live event that was streamed in such high quality.

Watching a Dreamstage concert on the large screen takes a little time for set-up. It requires Apple TV, and if you don't already have that, setting it up requires downloading the Apple TV app. For my first concert, I watched on my Macbook Air, having spent longer than expected buying the ticket. (I had some issues getting my credit card into the system and was beginning to think I would not be able to see the concert!)

While I not able to access every bell and whistle, the sound was clearly superior, even on my MacBook. The video was also visually clear, with several camera angles, and there was not any glitching when it came to the Internet connection.

On to the concert itself: It was a program that grew from making music at home during the current pandemic, but it also looked to the future for Gil and Adele, who were performing live at Bard College, where they have just taken positions on the violin faculty and will start teaching this fall.

During the pandemic, many violinists have turned to the works that J.S. Bach wrote for violin alone, the Sonatas and Partitas, so it was fitting that
Gil and Adele began the program with an arrangement of the "Presto" from Bach's Sonata No. 1 in G minor. Listening to the Presto without looking at the music, it can feel like it floats between two meters, sometimes sounding like it's in two, sometimes in three. I think Bach intended the ambiguity, and it somehow it fits my pandemic-tinged feelings about time -- is it August, or is it March 175th? Gil and Adele played a wonderful arrangement for two violins (check out the sheet music): it is Brahms' piano version of the movement, which was made into a violin duet 100 years later by Ruggiero Ricci. 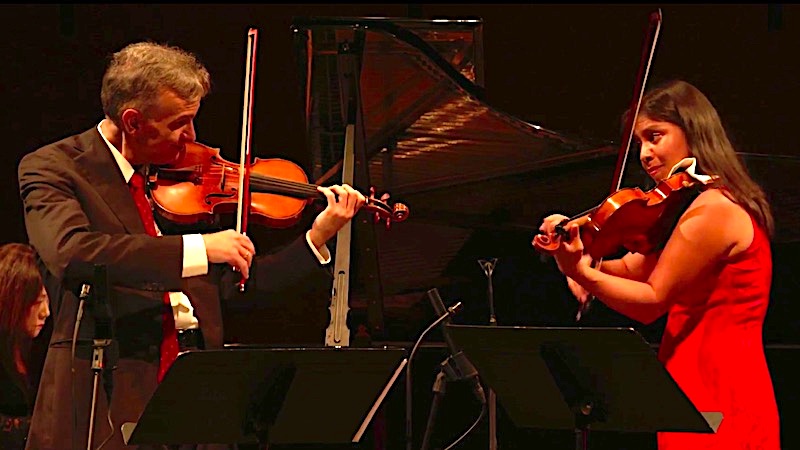 From there they played a program that was both virtuosic and representative of a variety of musical moods and styles.

When they played selections from the Etudes-Caprices by Wieniawski, I really noticed their gorgeous violin sound - both violinists play on Stradivari violins and know how to make them sing. The fact that it came across on my laptop is a testament to the high-def sound as well.

I was quite thrilled when Adele and Eri started playing the "Danse Russe" from Stravinsky's "Petrouchka" ballet - one of my favorite pieces for orchestra. How I miss the orchestra -- hearing this piece gave me just a bit of the feeling that the orchestra was there. This was an arrangement for violin and piano by the Polish violinist Samuel Dushkin - but kids, I'm not sure if you want to try it at home; it's full of octaves, harmonics, strumming pizzicati, double stops - you name it. No matter, to me it was just joyful and beautifully played.

Gil then took center stage to play Tchaikovsky's "Meditation" from "Souvenir d’un Lieu Cher" Op. 42. Meant originally to be the middle movement of the Tchaikovsky Violin Concerto, this piece is a true ode to the violin -- how luscious can it sound, how urgently can it pull at a listener's heartstrings? Gil played the piece with gorgeous tone and deep sentiment, but also with spark and playfulness. The end sounds like a leaf swirling downriver - then the ascent at the end was slow and spellbinding.

Gil and Adele joined forces again for Prokofiev's Sonata for Two Violins, Op. 56, a piece where simplicity and complexity walk hand-in-hand, as do past and present, with Prokofiev's neoclassical moments. The spooky musical lines weave in and out, showing how well Gil and Adele are able to meld their sound when working together. Who was playing first violin, who was second? I have no idea. They were equal dance partners here, easily switching between primary, supportive and collaborative roles.

Next was the popular piece for two violins and piano, Moszkowski's Suite in G minor, Op. 71. Okay, it's only popular among violinists who like to play duets, but it's a great one. My favorite part was the mad dash at the end - so well synchronized.

They concluded with Pablo de Sarasate's "Navarra," a piece that is so technical, it's almost humorous. Gil and Adele didn't seem worried at all about the technical hurdle-jumping. In fact, these two were almost laughing by the end, as if all those trilly-frilly passages were actually ticklish. It's a cute piece - at one point they almost seems like birds singing to one another, and I felt like I was standing in the middle of Disney's Enchanted Tiki Room.

It was a nice feeling to have.

August 26, 2020 at 06:11 PM · The concert was fabulous!! Yes, it was an off time of day for me too. I agree that even on my computer, the sound was superior. Thank you for making us aware that this concert was happening. It was so worth it. In fact it was quite a good deal to see this performance! It took me longer to log in than I expected, and I missed the 1st piece! For some reason my computer whirled around for awhile before I got sound.