August 18, 2020, 12:19 PM · Late summer has not brought back live concerts in the U.S., but musicians continue to connect with their audience in a variety of ways: last Sunday Joshua Bell was featured in a PBS show; next Monday Gil Shaham and Adele Anthony will try holding a concert on a new online venue called Dreamstage; and these days the Los Angeles Chamber Orchestra is recording its musicians at concert venues and churches rather than living rooms. And there are still beautiful performances from home, from musicians such as Timothy Chooi and Chee-Yun Kim. 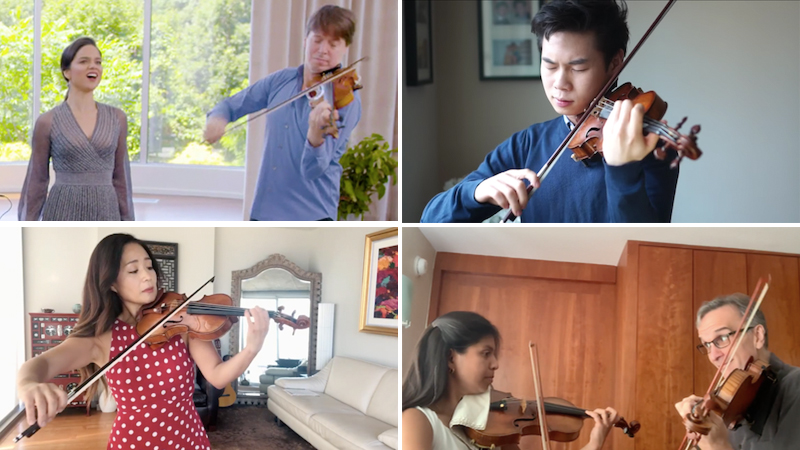 Last Sunday Joshua Bell was the topic of an hour-long PBS special called "Joshua Bell: At Home with Music," which features the superstar violinist playing a recital from his home in upstate New York. For me, the highlight comes at 43:08, when he and wife, soprano Larisa Martínez, and pianist Kamal Khan perform selections from their own arrangement of West Side Story - especially "Tonight," which turns into a love duet between violin and voice. Joshua also performs with pianists Jeremy Denk and Peter Dugan. Interspersed are clips of an interview with Joshua, as well as scenes from home life with his kids, and even a few vintage T.V. appearances. And if you want just the music, there is an album called Joshua Bell: At Home With Music that was released in conjunction with the special.

Violinist Timothy Chooi said on Facebook that Bach's Sonata No. 3 was the only Bach sonata he had never studied, and so he made it his pandemic project. The Largo from that Sonata is certainly one of the most beautiful movements in all the Sonatas and Partitas; after the thorny and epically long C major fugue, it comes in like a breath of fresh air after a rain storm. Timothy channels that feeling beautifully. He has placed the music at the bottom of the screen so you can follow along. Enjoy:

Presto: from Bach to Brahms to Ricci to Shaham

Speaking of Bach, married violinists Gil Shaham and Adele Anthony bring us the story of a "Presto for Two Violins" - an arrangement of an arrangement that they will play for an online concert August 24 on Dreamstage. It started as Bach's Presto from the Sonata in G minor, which Johannes Brahms then used (some 100 years later) in one of his piano studies, adding a second voice. Then the following century, violinist Ruggiero Ricci arranged the study by Brahms into a duet for two violins. Here is a little demonstration from Gil and Adele, who invite you to their concert next Monday. (Click here for more info). Fun fact: Their son, Simon, 8, made this video!

Violinist Chee-Yun Kim performs at home in this recording of Fritz Kreisler’s Recitativo and Scherzo. Kreisler dedicated the piece to Eugene Ysaÿe - I definitely hear harmonies that bring to mind Ysaye's Sonatas. Chee-Yun said she made this video especially for Orcas Island Chamber Music Festival as an "Encore Concert" for this summer. As with all of us, she is looking forward to the day she can "return to beautiful Orcas Island to play for my lovely Orcas friends and family, in person!"

The Los Angeles Chamber Orchestra is finding ways to create more formal performances to post for its fans while still following distancing guidelines. Here, principal percussionist Wade Culbreath performs the "Gavotte en Rondeau" from Bach's Partita #3 for solo violin, transcribed for marimba. The performance is part of LACO SummerFest, a series of 30-minute, biweekly, pre-recorded classical music concerts by LACO musicians. Recorded using COVID-19 safety guidelines for film and television production in Los Angeles County, "our goal for the series is to put our LACO musicians back to work and provide a safe path forward for musical performances to return to L.A.," said LACO Executive Director Ben Cadwallader. Recorded in the Colburn School’s Zipper Hall the concerts are initially be available at http://laco.org/livehttps://www.laco.org/summerfest-ondemand/, and will be shared every other Saturday through Sept. 5.

And finally, if you are looking for more classical performances online, Musical America's Guide to Mostly Free Streams provides a rather comprehensive guide!

With large-scale concerts and symphony performances almost universally on hiatus, our weekly roundup has switched focus from concert reviews to the many different ways that artists, orchestras and educational institutions are continuing to keep the music going. If you’d like to share links of socially-distanced performances, new performance videos, teaching experiences, camps, or master classes you’ve enjoyed, please do so in the comments or email Laurie for possible inclusion in a later opus.