August 13, 2020, 7:41 PM · Welcome to "For the Record," Violinist.com's weekly roundup of new releases of recordings by violinists, violists, cellists and other classical musicians. We hope it helps you keep track of your favorite artists, as well as find some new ones to add to your listening! 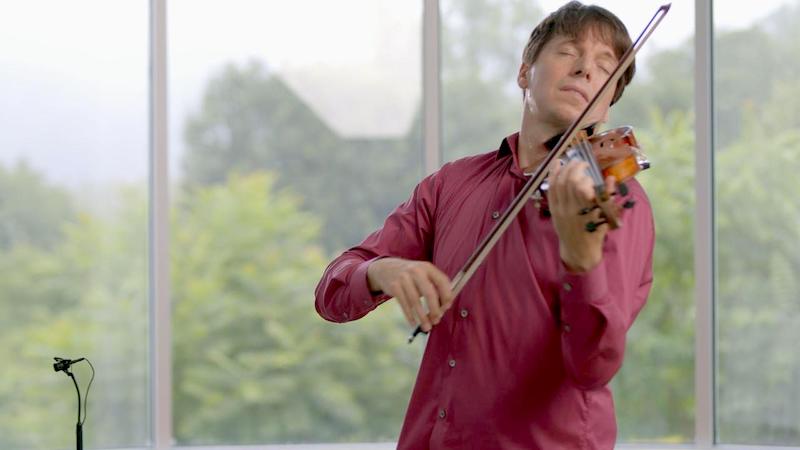 Superstar violinist Joshua Bell once again invites us into his home, this time for performances with wife, singer Larisa Martínez as well as pianists Jeremy Denk, Peter Dugan, and Kamal Khan. The album is a companion to a new PBS nationwide broadcast special called "Joshua Bell: At Home With Music," which will air at 7 p.m. ET on August 16 on PBS, after which it will be available to stream for two weeks in the U.S. Musically, the special and the album include violin showpieces, arias and songs such as such as "Summertime" from Porgy and Bess; a West Side Story medley; Wieniawski's Polonaise de Concert in D; a movement from Beethoven's Sonata No. 5, Op. 24 and more. The PBS special also includes a behind-the-scenes look at family, Bell’s own musical inspirations, and more. BELOW: Here's a trailer for the program and album:

British violinist Daniel Hope, along with pianist-arranger Christoph Israel, present 21 highlights from Hope's T.V. show Hope@Home, which was produced from Hope's Berlin living room – live from the lockdown – for the German/French ARTE TV network. The daily series allowed the violinist and his guests to stay connected with their audiences from the earliest days of the pandemic, and together with its sequel, Hope@Home on Tour!, ran to almost 70 episodes, was streamed more than six million times, and raised tens of thousands of Euros for artists in need. The album features guest appearances Berlin-based artists such as actress Iris Berben, jazz trumpeter Till Brönner, baritone Matthias Goerne, rapper Max Herre, cabaret singer Max Raabe, and pianist Tamara Stefanovich, with repertoire ranging from classical, to favorite songs, to Hollywood favorites. "This album is a document of those extraordinary weeks. Everything you hear is live, one take only. Some pieces were rehearsed, others were not. In some cases Christoph Israel finished the arrangements literally minutes before we went live. You will hear the frequent squeak of my living room floor, as well as other spontaneous bumps and bangs. There were no patches or editing, no second takes. Sometimes life doesn’t allow for second takes. This was my world for six magical and highly unusual weeks. I hope you enjoy listening." BELOW: Daniel Hope and Christoph Israel perform Christian Sinding's "Suite in the Old Style" last spring in the fourth episode of Hope@Home:

Fazil Say is one of the world’s most prominent pianists but he is also a much-admired composer with a substantial catalogue of works. He combines both these accomplishments in his two Violin Sonatas, the first of which is suffused with Turkish motifs and dances, such as the horon. The second sonata takes as its theme the abuse of nature and the need to resist despoliation. His Violin Concerto is subtitled "1001 Nights in the Harem" and is full of rich melodies and atmosphere, and features an array of Turkish percussion instruments. German-born violinist Friedemann Eichhorn performs with the composer.