August 11, 2020, 2:09 PM · During the pandemic, both artists and audiences have been frustrated by the limitations of classical concerts streamed over social media, with disappointments such as poor sound quality, lack of a visually interesting venue, glitchy connections, and general feeling of disconnection, despite everyone's best efforts. 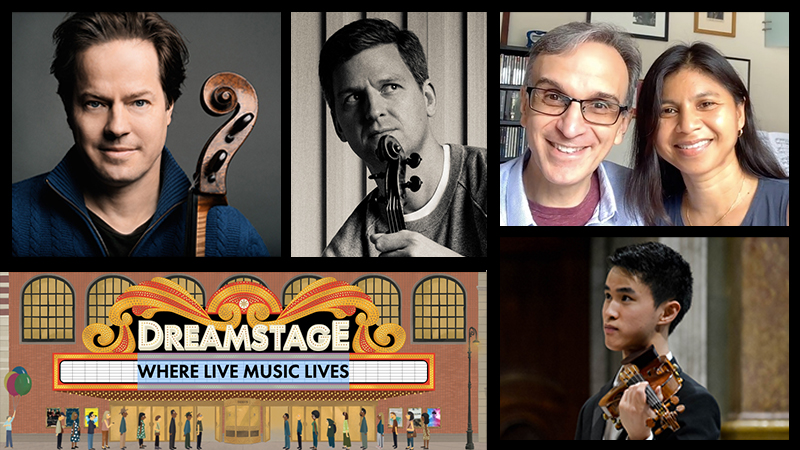 But imagine an online performance that feels a more like the real thing - a live concert at a beautiful venue, streamed in high definition audio and video. There's even a visual world created around the performance, with box office, a front door entrance for the audience, and post-performance green room where audience can meet and interact artists. It takes place in real time, with an option to watch it on a big TV, not just on the computer. On top of all that, the artists get paid.

Those are some of the features of an ambitious new platform called Dreamstage.live, which promises a premium experience for a paying audience. The online concert venue is the brainchild of cello soloist and Dresden Music Festival director Jan Vogler, along with entrepreneurs Thomas Hesse, a former Sony executive, and Scott Chasin, an expert in technology. Dreamstage is gearing up to start concerts later this month, with 30 live events scheduled: mostly classical concerts with top artists, with plans in the works for Latin music, hip-hop, jazz, rock and pop.

Just going to the "box office" gives you a feel for it (click here). The detailed concert "world" is inspired by filmmaker Wes Anderson and illustrated by graphic artist Max Dalton. While you are there you can check out the concerts, which are set begin on August 22 with an opening performance featuring Vogler himself with pianist Hélène Grimaud. Following that is a daily lineup of some of the best classical musicians on the scene today: violinist James Ehnes and pianist Inon Barnatan on Aug. 23; violinists Gil Shaham and Adele Anthony with pianist Eri Kang on Aug. 24; French pianist Lise de la Salle on Aug. 25, and more. Other featured violinists include Kevin Zhu on Sept. 5 and Nathan Meltzer on Sept. 18.

"The COVID-19 crisis has shown us the need to adapt the technology of the 21st century in the field of live performance," Vogler said. "I am excited to contribute to a new venture that will benefit both my fellow musicians and our worldwide audiences." While Dreamstage will provide a venue for artists currently sidelined by the pandemic, it is also meant to evolve as a platform that would complement a live format, as audiences return to in-person events.

Vogler started thinking about creating a live stream venue when locked down with his family in New York City in March. During that time, Vogler and other New York-based friends and colleagues created a 24-hour-livestream called Music Never Sleeps NYC.

"It was my first experience with live streaming and I was overwhelmed by the reactions from all over the world," Vogler told me. "Audiences, press and colleagues, everyone was very touched by the musicians community reaching out and giving comfort during hard times."

"After Music Never Sleeps, I realized that live streams can reach people worldwide and of all ages, and that we artists are able to transfer emotions through 21st century technology," Vogler said. "I called my friend Thomas Hesse, who is one of the most influential music industry leaders in the world. Then a few days later a friend connected us with tech visionary Scott Chasin. Together we discussed how we could establish a platform to help artists to perform for their worldwide audience. We discovered that we are kindred spirits!"

"Since it became clear that live concerts in front of people would not be back for a long time, we wanted to help artists and audiences by building a beautiful virtual concert hall that would open its doors -- when the doors of the great concert halls in the world were closing," Vogler said.

To that end, Vogler and his partners aimed to create something that truly gives both audience and artist the feeling of "being there."

"We want to make the experience as close as possible to an evening at a great concert hall," Vogler said. "From the color scheme that is warm and welcoming to Max Dalton's wonderful illustrations, the environment of Dreamstage was inspired by filmmaker Wes Anderson. All three of us founders are fans of his work, and Max Dalton has worked with (Anderson) and created illustrations for him. Design, taste and imagination are important to frame great concerts."

At the same time, "we also provide true high tech under the hood," Vogler said. "During the last few months streaming was primarily done through social media, with the quality being less than ideal. We provide high-definition streaming quality and want to invite fans to listen to their favorite artists in a new way."

To watch a concert on Dreamstage, "you can use any device, from TV to computer, tablet or phone," Vogler said. "Our wonderful engineers are building a tvOS app that will sit on your smart TV next to the Netflix app. Roku to follow. We believe that it is key to create a lean-back experience for our audiences, who can watch the concert in amazing quality, with family and friends, on their big screens."

Vogler added that Dreamstage will never present previously recorded events. "We are strictly live, we want to create an event that can not be missed and that is singular," Vogler said. "As a musician, I want to feel the adrenaline, and I want to feel that I am in sync with people around the world who are joining in. In my opinion, a real concert is all about the moment and spontaneity."

Importantly, Vogler sees Dreamstage as a way to help artists to regain their livelihood. "The next few months will be very hard for performers around the world," Vogler said. "Dreamstage will help to connect artists with their fans and we are very grateful to the audiences who are supporting artists by buying the tickets."