July 30, 2020, 10:58 PM · Welcome to "For the Record," Violinist.com's weekly roundup of new releases of recordings by violinists, violists, cellists and other classical musicians. We hope it helps you keep track of your favorite artists, as well as find some new ones to add to your listening!

Mozart Requiem Arranged for Cello
Dedicated to the victims and families of Covid 19
Tony Woollard, cello

"My biggest musical passion is Mozart’s Requiem," said cellist Tony Woollard. "Six years ago I made an arrangement of the Lacrimosa. It became popular on YouTube but there was never time to finish the whole arrangement. When the lockdown was announced...I immediately started arranging and recording at home. At the end of each recording day I would email audio files and video footage to my closest friend and producer, Andrew Holdsworth, who would mix the 20 cello parts together and create multi-screen videos for each movement. And then in April, disaster struck. After a particularly bad night of breathing difficulties I called my doctor and a few days later tested positive for Covid 19. This was complicated by my history of childhood asthma. I confined myself to bed with a nebulizer, inhalers and a copy of Mozart’s score. Things felt desperate. For a long time I could only focus on breathing in and out. I arranged music when I felt I had any energy and did breathing exercises and slept the rest of the time. I had a copy of Mozart’s original score to work from and the image of Mozart on his deathbed surrounded by the very same score was not far from my mind. Fortunately, I was one of the lucky ones. Despite weeks of feeling slightly better and then worse again, I’ve recovered and I’m incredibly grateful to my family, friends and the NHS." BELOW: Cellist Tony Woollard performs the beginning of Mozart's Requiem, all on cello:

"The Swing States project is a musical contribution that I hope will help galvanize folks to get out, exercise their right to vote and encourage their brothers and sisters to do so as well," said jazz violinist and MacArthur Foundation "genius" award winner Regina Carter. For the album, Carter and her Freedom Band recorded arrangements of state songs from places that will ultimately determine the 2020 election, such as Georgia: "Georgia On My Mind"; Florida: "Swanee River"; Colorado: "Rocky Mountain High"; and Michigan: "Dancing in the Street" -- a song that became an anthem for the civil rights movement. 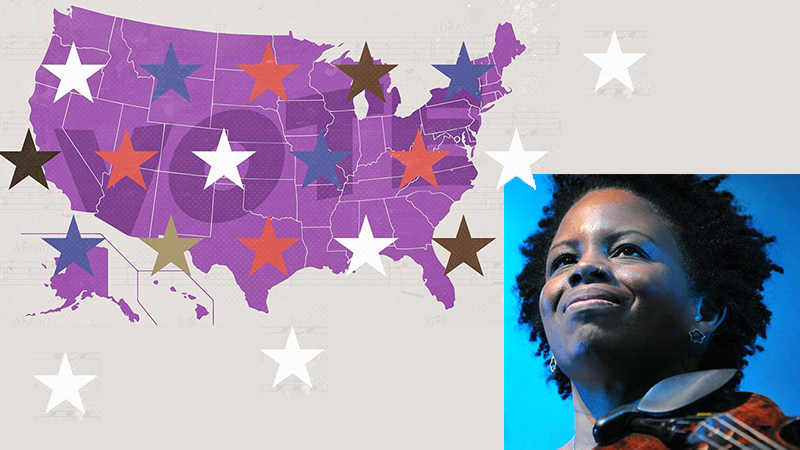 Following on from her album The Polish Violin last year, Jennifer Pike now turns her attention to British repertoire, exploring the other side of her heritage with a new album coming out this summer. Pike actually credits Elgar with inspiring her to take up the violin: "In many ways I found my path to the violin through Elgar." The composer’s music was some of the first that Pike ever performed, "the way he is able to exploit the sonorities of the violin has captivated me throughout my life." The album also features Vaughan Williams’ own Violin Sonata, one of the composer’s later works written just a few years before his death, a masterpiece which Jennifer believes deserves to be performed more often. The final piece on the album is the original 1914 version of Ralph Vaughan Williams’ The Lark Ascending, which was premiered 100 years ago in 1920. BELOW: Jennifer Pike performs Vaughan Williams' 'The Lark Ascending' at the National Portrait Gallery: