The Legacy of Violinist Isaac Stern, 100 Years After His Birth

July 22, 2020, 12:08 AM · Tuesday marked the 100th anniversary of the birth of violinist Isaac Stern (1920-2001), and the year 2020 held plans for myriad events - large and small - to celebrate his accomplishments. Many of those celebrations still will happen, though the pandemic may have delayed or scaled them down. 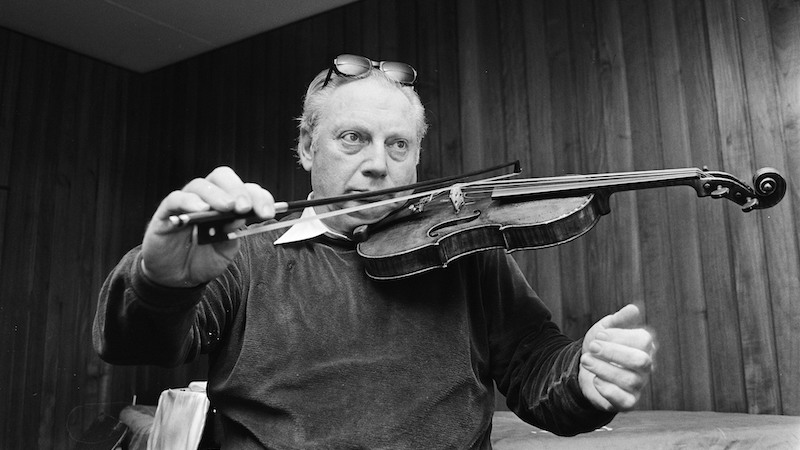 Indeed, Stern's 20th-century triumphs stand in stark contrast to this year's demoralizing setbacks for the classical music world. But perhaps we can derive some inspiration from Stern's zest for life and his energy for preserving our musical institutions for future generations.

There is no doubt that Stern's life and work had a profound effect on the state classical music during the 20th century and beyond. Stern is credited with saving New York City's Carnegie Hall from the wrecking ball. His travels to post-Cultural Revolution China sparked great interest in classical music there and created enduring connections. Stern's voluminous recording output began in 1944 and continued until the last year his life, and he famously embraced the work of contemporary composers. Stern practiced "community outreach" before it was trendy, and he started many now-famous musicians on their career paths. He also apparently had more than enough friends, acquaintances and contacts to fill at least three Rolodexes. (Kids, I'll explain what that is later.*)

It seems relevant to note the state of a few things in 2020, though. Stern's beloved Carnegie Hall is shuttered for the remainder of the year, with 131 employees furloughed or terminated since pandemic lockdowns started in mid-March. Tanglewood, the summer home of Boston Symphony Orchestra, where Stern made numerous appearances over a span of 50 years, had to cancel its entire 2020 season due to COVID-19, replacing it with an online festival. Its Tanglewood Gala celebration of Stern will take place on July 23, not quite the large-scale celebration that had been planned, but as a robust online event. (You can watch it for free if you register.) The Shanghai Isaac Stern International Competition, another organization that had big plans for its namesake's centennial this summer, has been postponed until August 2021.

Even before the coronavirus lockdowns this year, I was thinking about the contrast between Stern's time and our own. What is Stern's relevance to our 21st-century existence, in which Stern's kind of stratospheric career simply no longer seems possible for even the best-of-the-best violinists?

These thoughts occurred as I was reading David Schoenbaum's recently published book, "The Lives of Isaac Stern" in late February. (The book was just published in June, but I'd received an early copy.) My state of mind was influenced by the fact that I was recovering from an intense illness that had brought on a four-day, 100F+ fever. After that illness I had no doubt about what was coming; my Chinese students had warned me, and I now believed it fully. Needing air, I took the book to the Huntington Gardens to read it outdoors.

Schoenbaum's new book is not as densely written as "A Social History of the Violin," which he wrote in 2013, but it is dense. It is also circular, weaving in loosely-relevant bits of 20th century history with various facts about the life of Isaac Stern. I can't call it a narrative; instead of telling a linear story of Stern's life, it goes at it with four sections based on what Schoenbaum casts as Stern's four "lives": the Immigrant, the Professional, the Public Citizen and the Chairman of the Board. I struggled through the first chapter, vainly looking for the plot line. Once I gave up on that idea, I actually started to enjoy just learning this and that about Isaac Stern. I read the book to the end.

My takeaway: it's hard to fathom the life Stern lived, starting as an immigrant from the Ukraine to San Francisco, taking up the violin at age 8 (a ripe old age to start, these days), then going on to work with the greatest musicians of the 20th century. He played for the troops during World War II. He worked with Leonard Bernstein. He played not just on the concert stage but also for movies and on T.V. He helped start the careers of Yo-Yo Ma, Itzhak Perlman, Midori and others. He was a power broker, a citizen of the world. He didn't shy away from politics, or from doing big things.

And yet I can attest personally that he did not overlook the little things as well - like a visit to an elementary school while he was on a concert tour. It's not something that every touring artist did at the time.

My husband Robert has never forgotten Stern's visit in 1979 to his school, Skiles Test Elementary School in Indianapolis, where Stern was received like a rock star. "The children had prepared for Stern's visit by studying about him and listening to his music," the Indianapolis News said. Children had written poems and drawn pictures about Stern, and the halls were covered with them. The city's mayor, William Hudnut, even attended the visit - handing Stern a key to the city and officially proclaiming the day "Isaac Stern Day." Stern spoke at a convocation and then made a special visit to the orchestra kids and played "Turkey in the Straw" on their orchestra teacher's violin. Stern signed his autograph on a piece of paper, and afterward the teacher copied it on a ditto machine* it to distribute to all the music students. His message to them, "If you have music with you all your life, you will be truly rich."

I also met Stern, in 1983, when I was a teenager. I was introduced to him by Helen Black - quite a citizen herself, as the first female reporter at Denver's Rocky Mountain News and the co-founder and 30-year business manager of the Denver Symphony. I knew the enormous stature of this violinist, and I was extremely nervous. Without meaning to do so, Helen found the most-embarrassing-possible way to introduce me: "This is Laurie," she said. "She plays the violin!" I tried to turn invisible but just turned red. Stern raised his eyebrows, smiled broadly at me and said, "Why, so do I!"

In the intervening years, I learned that Stern was a fallible human, like the rest of us. Not everyone liked him; not everyone even liked his playing. But he did great things for classical music. He had vision, and he had the courage to turn his ideas into action - something that the classical music community will need more than ever as it looks to emerge into a post-pandemic world.

For me personally, since a recording of Stern playing the Beethoven violin concerto (and some other works) was one of the few records I had, he had a profound influence on getting me excited about the violin. I know now for some he was controversial, but I knew none of the this as a boy. I loved the violin, my father had played the violin (not well, but he played), and there was the world famous Isaac Stern who's playing sent almost orgasmic shivers down my spine. Changed the course of my life.

I'm not surprised to hear about the school visits and their influence.

July 23, 2020 at 01:33 AM · Your beautifully-written article was a wonderful opportunity to revisit the life and career of one of our great violinists. Thank you, Laurie. And I agree with commenter Michael Browder... Stern was one of the few violinists I was able to hear on recording when I was young as well, so he made quite a mark.

July 23, 2020 at 01:44 AM · The first great violinist my father ever took me to hear was the late Ida Haendel. I think she played the Beethoven. The second was Isaac Stern. If it was the Brahms he played, his playing did not stop me commenting to dad how vulgar I thought the theme of the last movement was! (I am less fastidious these days, Brahms being a favourite composer!)

The next time I heard him was many years later on my "uncle" (actually 1st cousin once removed)'s LP of a Prades festival. The last time was on what I fear may be his longest lasting legacy for most people - and the guy playing the violin while balancing on that roof didn't look like him.