July 13, 2020, 8:55 PM · It's a problem, and it has been for a long time. The "bots" that Facebook uses to bust people for copyright infringement don't work for classical music.

While many classical musicians have come to expect the regular false claims on their work, an incident we experienced over the weekend at Violinist.com was especially notable for its absurdity. On Sunday, Facebook, on behalf of Naxos of America, automatically silenced our Facebook Live broadcast of Gilharmonic on Violinist.com with Gil Shaham. The disruption started when our eight-year-old guest, Yugo Maeda, started playing the Preludio from Bach's Partita No. 3 in E major.

In their words: "Your video matches 1 minute and 6 seconds of music owned by Naxos of America - 'Violin Partita No. 3 in E Major, BWV 1006: Preludio' by Julian Olevsky." 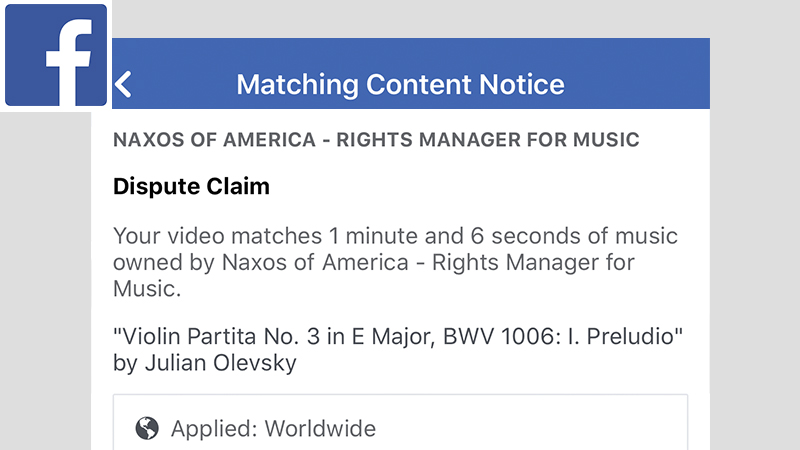 A few points here. First, this work by J.S. Bach is very clearly in the public domain in the United States. Bach wrote it in about 1720, and he died in 1750. Second, it was a performance by an eight-year-old music student, not by the violinist Julian Olevsky. The late violinist apparently recorded the work in 1953, and Naxos re-released it in 2003.

Facebook uses automated programs, or "bots," to scan and identify copyrighted content on its platform. But matching content isn't as simple as matching notes - not in the genre of classical music, where so much of the music lies within the public domain, even if specific performances of that work may be copyrighted. While Facebook users can have their accounts restricted or deleted for illegally posting copyrighted material on the platform, there appears to be no penalty to companies such as Naxos of America for filing false copyright claims, including the false claim against us.

It's also worth noting that YouTube also uses bots to check for copyright violations, and we've received no claims against our Sunday broadcast from them. Gilharmonic on Violinist.com with Gil Shaham has been broadcasting on Sundays at 2pm Eastern and 11am Pacific on both Facebook Live and YouTube Live.

Of course we are in the process of disputing the claim with Facebook. But that doesn't change the fact that Facebook turned off our livestream at about five minutes into our 57-minute broadcast. Even though few people were able to see the show through Facebook, it played without incident on YouTube, where you can watch it now to see - and hear - Yugo's performance, as well as performances from Rabia Brooke and Roby Lakatos.

Twenty-four hours later, Facebook is now showing the video of our broadcast, but it still has Yugo's performance muted - presumably the part that they feel "matches" the Olevsky performance. (Check it out: about 4:24-7:38.) We don't find any way to speed up the dispute process, or even to amend our dispute (at first we didn't know they were disputing the Bach), or to speak to a human being at Facebook or Naxos.

We apologize to those who were not able to see our show as we intended on Sunday. To see future shows, we recommend that you subscribe to our YouTube channel and to opt into notifications to get an alert whenever we schedule a live broadcast.

At this point, we are considering whether or not to stop broadcasting on Facebook Live, given Facebook's and Naxos' inability to tell the difference between music students and professional recording artists, or perhaps even between various recording artists who might be playing for other labels. But we definitely will keep broadcasting on YouTube, so please, follow us there!

UPDATE 7/14/20: Today we received notice that Naxos of America accepted our dispute and released their claim on our video. Our young student is no longer muted. Unfortunately it doesn't change what happened with the live broadcast! I feel they owe an apology to young Yugo, above all.

July 14, 2020 at 05:26 AM · Good luck getting anywhere with Facebook. I'm locked out of my own page for over a month now and zero-point-zero customer service. They don't even bother to answer.

July 14, 2020 at 06:02 AM · This is outrageous, I've seen companies claim that random people are the ones playing a piece when in reality someone else (Gil Shaham in this case) was playing it.

Look in the description:

“Music in this video

July 14, 2020 at 06:54 AM · I've had Facebook block out videos for alleged resemblance to a commercial recording when it was a community orchestra sight-reading the piece in the first rehearsal (with lots of mistakes) and the recording was made with my phone sitting on my music stand (balance heavily tilted toward violas and low brass, first violin and cello sections muted by being on the other side of the stand). There was no way any human could possibly mistake the video for a commercial recording, either in the quality of playing or in the balance between sections.

July 14, 2020 at 09:20 AM · This is so outrageous. Record companies can randomly claim copyright on other people's performances on public domain materials and profit from it.

There's something really wrong in the world that they can do it without penalty and not ordered to provide compensation to the people that got wrongful accused of copy-right infringement.

It is a very sad story, actually.

July 14, 2020 at 04:41 PM · As I was a student of Olevsky's, I was in a sense gratified that one of his performances was flaggable in this way - he was a truly great player but not as well-known as he should have been. Sorry that your broadcast was interrupted in this way, but your young student should know that the example that muted him was an excellent one. If he's playing that piece at age 8 he must be a remarkable talent.

July 14, 2020 at 08:08 PM · This incident reflects poorly on Naxos and on Facebook. Naxos specializes in classical music. It is well known that these bots are not accurate. Why is it using bots to make false claims?

When companies provide poor service, I stop using them.

Those who claim exclusive performance rights on Bach's music are thieves because they are stealing rights which don't belong to them. Well it was bot, but a bot that needs an update it seems.

Good that Naxos of America accepted the dispute, anything else would have been a serious lack of ethics.

July 15, 2020 at 07:47 PM · I am glad you made good headway on this, Laurie. Usually people get nowhere in these disputes. And I think it very important that you let us know of the issues, but at the same time making it public in a big way. That hopefully helped the cause.

July 16, 2020 at 01:06 PM · I didn't have a problem and was able to watch the entire show, until the end; Roby Lakatos's Summertime was cut short, but then the broadcast went back to Gil. I did notice how few people were watching and I guess that explains why. Enjoyed it.