July 7, 2020, 5:15 PM · At some point while playing on a cruise between West Africa and St. Bart's, violinist Andrew Sords and cellist John Walz realized they'd crafted "the Sords and Walz edition" of the piece they were performing, a seldom-played duo by Haydn. 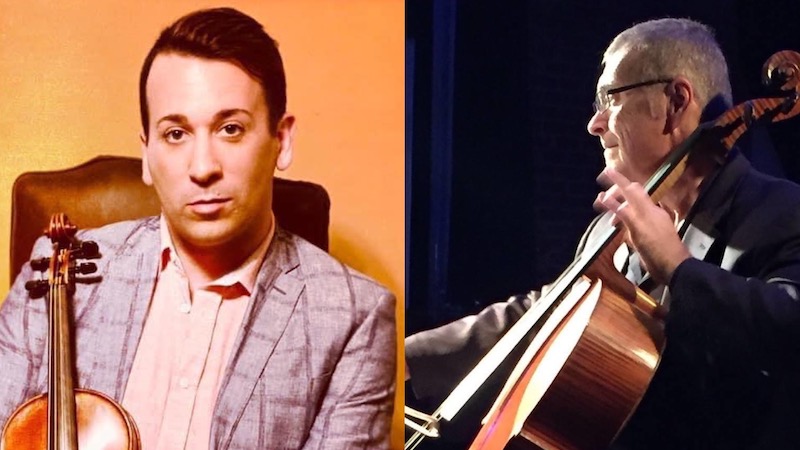 Now that duo - Haydn's "Duo" for violin/cello (or viola) - is just one of six rare works that Sords is offering in a new series of editions called Green Point Editions. The others are Mozart's "Hague" sonatas; Jeno Hubay's Carmen Fantasie; Sibelius's "Nocturne" from Belshazzar's Feast; Claudio Brindis de Salas' "Consolation"; and in August, Ysaÿe's arrangement of Chopin's Ballade in G minor.

Andrew, who is based in Cleveland, said that the aim is to highlight deserving works that are on the periphery of our repertoire, in the hopes they will remain in the canon.

Andrew has long nurtured a passion for comparing and collecting editions. In fact, he was in just grade school when local Cleveland Orchestra violinist Felix Freilich died, leaving an extensive collection of sheet music and notes. Freilich's daughter called Andrew's mother and asked if the youngster would like to come over and take a look -- perhaps pick up a few pieces of music.

At the time Andrew couldn't fully appreciate what he was seeing, but he knew enough to understand there was treasure before him. "There were hundreds of pieces of music. He had multiple editions of Mozart's third concerto, the Mendelssohn concerto and the Paganini Caprices. There were little-known gems by Glazunov and Conus; a Hungarian Suite for violin and piano by Rachmaninoff. There were short pieces by Lalo, and Lalo's F minor concerto. The were concertos by Viotti -- Nos. 4 and 22..."

"We all know he wrote 22, so it makes sense he wrote 21 before that -- but we never see any that came before it!" Sords said.

Back to the treasure - there was even a copy of Michael Rabin's edition of Ravel's Tzigane; as well as an edition of Beethoven's Violin Concerto from the time of Beethoven!

The young Andrew had been sitting for four hours, combing through the collection, when the daughter walked in and observed his keen interest. "Would you like all of it?" she said.

He took it all, and "it's gone with me everywhere I've lived!" Freilich's collection was the start of a lifelong passion for discovering rare works, collecting editions and examining the fine details.

Looking at one of the new editions (the Haydn!) - it is what we all crave: clean, clear, easy-to-read, with a lovely introduction. Now I just have to find a cellist to play it with me (at a distance, wearing a mask....)

Below is a run-down of the works highlighted in Andrew's new editions, and Andrew offers a brief story about each one:

Mozart's "Hague" sonatas: "The Mozart sonatas were penned in Holland for Princess Caroline by young Mozart, and serve as a vital stepping stone en route to sonatas by Beethoven."

Jeno Hubay's Carmen Fantasie: "I've been obsessed with the Carmen motivic material since I first heard those sultry themes as a young boy, and, in my opinion, Hubay captures those themes (including the Toreador theme!) expertly. Hubay dedicated his arrangement to Vieuxtemps, and there are not so subtle references to his concerti (and an overt reference to the Beethoven concerto!) in this fascinating, yet concise version."

Sibelius's "Nocturne" from Belshazzar's Feast: "Ever since I heard the Grumiaux recording of the Nocturne from Sibelius' incidental music to Belshazzar's feast, I was transfixed by the melancholic fragility of the theme...and it makes for a riveting encore."

Haydn's "Duo" for violin/cello (or viola): "Los Angeles-based cellist John Walz, a dear friend and virtuoso, introduced me to the Haydn duo back in 2017. It shared program space with the duos by Kodaly and Handel-Halvorsen, and we reprised it at the Canary Islands last fall. It makes for a tremendous program opener - and it was a thrill to collaborate with John on his edition. The markings, notes, and ideas come directly from his long history with the work (dating back to the Schoenfeld sisters introducing it to him!), and our subsequent concerts."

Claudio Brindis de Salas' "Consolation": "Claudio Brindis de Salas is not a household name, but he was quite the barnstorming virtuoso. de Salas is from the same generation as Chausson, Janacek, and Ysaye, but his reputation as "the Black Paganini" (of Afro-Cuban heritage) was apt - his music hearkens to the literature of Schumann, Chopin, and, yes, Paganini himself. Many years ago, Rachel Barton Pine released an excellent recording of concerti by Black composers, and her championing in this vein motivated me to find under-represented composers who deserve to be heard. I recently told students at a masterclass in Canada that yes, their programs must include works by Beethoven, Brahms, Bach, et al...but Hubay, de Salas, Hubay, David, and Clement deserve airings, too!"

Ysaÿe's arrangement of Chopin's Ballade in G minor (to be released in August): "The most difficult of these works is certainly the Ysaÿe/Chopin Ballade in g minor...a work enthusiastically endorsed by none less than Camille Saint-Saens. Ysaye transcribed a Waltz, Nocturne, and this Ballade by Chopin...apparently as moved by the melodies as audiences are in the 21st century. On a personal note, a childhood crush played this Ballade brilliantly, and I've enjoyed hearing its soothing themes (and virtuosity) ever since. We are proud that our edition is seeing the light of day so that the next generation of virtuosos can present it!"

July 12, 2020 at 12:07 AM · Back in February Andrew was inLongmont to perform with the LongmontSymphony Orchestra. He also performed a recital on a Stradavarious and a Guernarius violin which were brought to Longmont by the owner who gave a talk about the instruments about a week prior to the concert. Both Sords and the LSO Concertmaster were able to play these instruments and discuss them. Andrew also had some copies of two of the Green Point Editions. I purchased both the Mozart "Hague" Sonatas for violin and piano and

Sibelius's "Nocturne" from Belshazzar's Feast. They are beautifully done, - clean - clear - very readable, but, no, I have not tried them yet.