"He may be mostly remembered for his teaching and pedagogy, but he truly was an artist-teacher," said violinist David Wallace, Chair of the String Department at Berklee College of Music. "He could sight-read anything on violin, and played viola extremely well. His baroque and classical performances on period instruments were stunning. He could be a consummate concertmaster, or a deferential second violist. On just two week's notice, Ken stepped in to give a stellar American premiere of Paul Cooper's Violin Concerto No. 2 with the Houston Symphony." 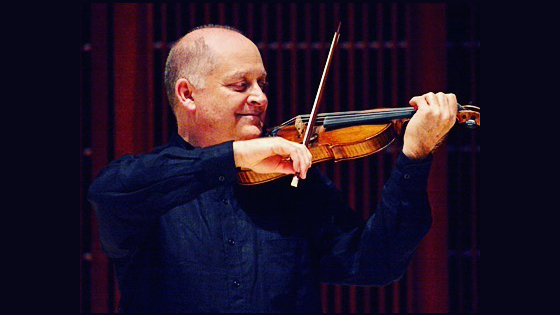 Born in Sharon, Pa., Goldsmith became a serious violin student as a teenager and moved to Detroit for his senior year in high school to study
with violinist Mischa Mischakoff, who was then the concertmaster of the Detroit Symphony and had formerly been concertmaster of the NBC Symphony Orchestra under Toscanini. Goldsmith described his lessons with Mischakoff in vivid detail: "It is no exaggeration to say that lessons were like Marine Boot Camp!" Goldsmith wrote. "Many students, both current and former, told me that if I could survive one year (doubtful) I would become a violinist."

He did survive, and in 1958, at age 19, Goldsmith became the youngest member of the Detroit Symphony Orchestra.

Goldsmith continued his studies, taking lessons with violinist Nathan Milstein. He also studied Baroque and Classical style with George Houle and Leonard Ratner at Stanford University, leading Goldsmith to be among the earliest to embrace and teach historical performance in America.

"We were musical brothers, artists-in-residence at Grinnell College for many years with the Mirecourt Trio," said Longy School of Music cello instructor Terry King, who played with Goldsmith in the Mirecourt Trio, a group that commissioned and premiered more than 80 new works and recorded 30 albums. "Ken’s experience crossed all musical realms — concertmaster, soloist, chamber player, a Baroque performance practice pioneer, recordings and concerts with jazz and country greats."

"There are two primary qualities that make an ensemble click: a deep commitment to music and artistry, and a generous sense of humor, capable of mending any turmoil," King said. In the Mirecourt Trio, "the range between dead serious and absolute silliness was almost schizophrenic, but we lived it. We fed on each other’s strengths with gratitude as we stole as much as we could. Ken tamed my 'head in the clouds' tendencies and was a terrific role model for discipline. We admired and loved each other as only music can say better than words."

In fact, Goldsmith played in many chamber groups besides the Mirecourt, including the Fromm Foundation Quartet, the American Arts Quartet, the Camerata Quartet, the Nashville String Quartet (Blair Quartet), the Claremont Festival Quartet, the Lyric Art Quartet, the Stanford Chamber Players, the Da Camera Society, and CONTEXT. His performances took him to forty states, Europe, Asia, Mexico, Puerto Rico and Canada.

Fellow Shepherd School Violin Professor Cho Liang Lin remembers playing a chamber music concert together with Goldsmith, cellist Lynn Harrell and violist James Dunham in Dallas. With Goldsmith, the rehearsals went smoothly and the relationships worked easily. "Ken was not fussy, we got it done," Lin said. "No pontification or one-upsmanship."

As a teacher, he did not run a "violin boot camp" - rather, he was thoughtful and effective teacher who also became a long-term mentor and life-teacher to many of his students.

"His passion and devotion for teaching was remarkable," King said, "and his students are found in major symphonic orchestras, opera and ballet as well as in the teaching professions."

"The collegiate Goldsmith studio was a happy, supportive family that frequently co-mingled with the studios of Mr. Goldsmith's friends and colleagues Fredell Lack and Sergiu Luca," said Wallace, who studied with Goldsmith from 1987-1991 at the University of Houston. "Mr. Goldsmith's pre-college students regularly attended his college master classes as well. To me, Mr. Goldsmith's master classes still represent the 'gold standard.' He always made feedback relevant to everyone in attendance, and offered contextual, historical, musical, and technical insights. Sometimes, we had reading assignments about pedagogy or performance practice."

Goldsmith also went to great lengths to ensure that his students had the necessary instruments, bows, and equipment for developing their talents and launching their professional careers.

"He owned quite a few instruments and bows, regularly loaning them to students with tight finances, or to those who had important concerts, competitions, and auditions," Wallace said. "He kept in touch with his former students, and whenever any of us sent him any of our latest achievements or output, he always responded thoroughly."

Goldsmith also was a great story-teller.

"Blessed with the most remarkable memory, Ken would frequently recount stories from the earliest stages of his violin studies with extraordinarily vivid detail and good-natured humor, from his earliest days at Interlochen (“I sat somewhere in the second violins in the orchestra and remember how thrilled I was playing Hans Kindler’s arrangement of Three Seventeeth Dutch Tunes”) to his studies with Mischa Mischakoff, former Concertmaster of the Detroit Symphony (“….lessons were like Marine Boot Camp!”)," said Kathleen Winkler, professor of violin at Shepherd School of Music. "It was always with lighthearted amusement with which Ken would reflect upon his life experiences."

"Mr. Goldsmith had a warm, larger-than-life personality and was a consummate storyteller and joke-teller," Wallace said. "He collected fine art, read widely, and loved cats. The true love of his life was his radiant wife, JoAnne Ritacca, an exquisite pianist, who knew most of his students and who supported his passion for music and teaching. In recital, the two of them had a phenomenal chemistry that particularly shone in works of French composers like Fauré or Saint-Saëns. Offstage, they embodied a level of oneness and friendship that few couples attain.

July 4, 2020 at 04:38 PM · I had the great good fortune to study with Goldsmith in college. One of my big regrets is that I didn't take lessons all four years. Time and money.

My clearest memory of Ken is watching him play with the Mirecourt Trio. At times he would let his eyes close as he played and the most beatific smile imaginable would come over his face. His playing was always sublime.