May 27, 2020, 1:49 PM · When Nicola Benedetti launched her Benedetti Sessions program in January, the model for her new educational program was to teach massive gatherings of children and teachers at various locations across the United Kingdom over the course of spring. 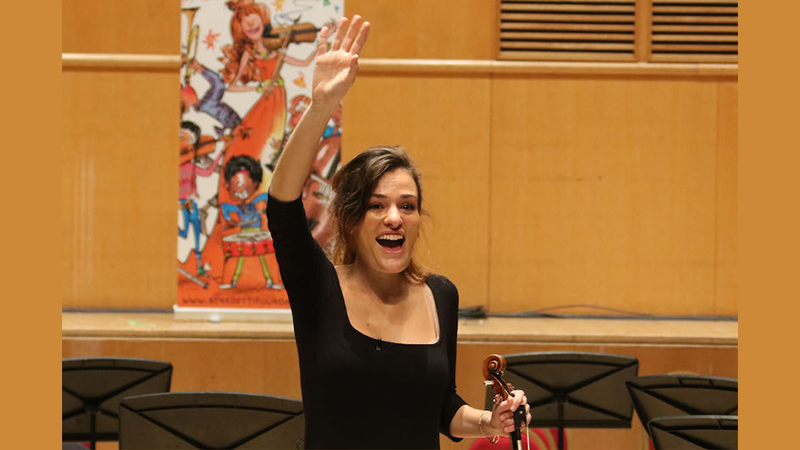 Obviously the worldwide Covid 19 pandemic changed those plans - but it also likely expanded the reach of her program, as thousands of music students all over the world have participated in her Virtual Benedetti Sessions. A Grand Finale concert - the culmination of those sessions - will take place this Sunday at 4 p.m. BST, and anyone can watch on Nicola’s YouTube channel (click here).

"Something like this (pandemic) is very humbling," Benedetti told the BBC earlier this month. She said that for the first two weeks of lockdown, she did not immediately get active online. "Somehow I just couldn't," Benedetti said. "Also, I was quite happy with not playing the violin for a little minute!"

Then she started to see how it could work, to move the Benedetti Sessions online.

"With the Foundation, we've always accepted that there are only so many physical workshops of that scale that I could put on per year, and each one serves hundreds of children, teachers and students," she said. But for year-round, consistent growth and meaningful impact with these students and teachers, she always knew that it would be necessary to use more online technology. "So it didn't take me long to realize that this is a time to make sure that we get a head start with that, and to make strides -- to be as active as possible to connect with as many people online to explore all the avenues through which you can communicate meaningfully with people online."

When Benedetti announced in early May that the Sessions were to go online, the signups came in fast: over the course of just five days, 7,157 participants signed up from every county of England, every local authority in Scotland, every local council area of Northern Ireland and 18 of 22 counties of Wales. By now, the Sessions have reached participants in 66 countries, including 41 U.S. states, with ages ranging from 2 to 92 years old.

As with the live sessions, her goal with the Virtual Sessions has been to pack them with substance "and at the same time have that excitement about that feeling that we're all in this together - the general vibration that we try to give to people during the actual workshop," Benedetti said. "How could we recreate that?"

To that end, the Virtual Benedetti Sessions that have taken place over the last three weeks have been geared toward string players at a range of levels: beginners, intermediate and advanced students -- as well as anyone who wants to bang on a pot or a pan.

What did they do, and how did it work? First everyone picked up their music on the Benedetti Foundation site, and then they worked on it, with sessions via noon Facebook Live sessions, Youtube tutorials and Zoom sectionals. Benedetti conducted many of the Sessions, but she also had some help, with a team of tutors and ambassadors, as well as guests such as Nancy Zhou, Elena Urioste, Andrea Gajic, Alina Ibragimova, and Ilya Gringolts, among many others.

Their efforts went toward learning and preparing to perform four pieces: an arrangement by Sarah and Laura Ayoub of Paganini’s Caprice No 24; Warlock's Capriol Suite, Movement 6; Tchaikovsky's Souvenir de Florence, and Vaughan Williams' Fantasia on Theme of Thomas Tallis.

Here is the recording of the Vaughan Williams that Nicola with made with conductor Karina Canellakas, violinist Andrea Gajic and Elena Urioste, violist Jenny Lewisohn, cellists Su-a Lee and Laura van der Heijden and bassist Alice Kent, for students to play along:

They also held more general sessions about things such as musicianship for youngsters who don't play an instrument; workshops on physical and mental well-being; sessions for instrumental teachers; sessions for conservatory students; and sessions for parents.

If you want to explore, it's not too late: the Youtube videos are sorted into playlists and can be viewed on this page, with things such as a parent talk with Nicola; Paganini Technique with Alina Ibragimova and Ilya Gringolts, and a tutorial on Tchaikovsky with Elena Urioste.

May 29, 2020 at 07:52 AM · Oh yes, Nicola Benedetti is doing great things and bringing joy and musical knowledge and understanding to many people. A damehood would be well deserved.

May 29, 2020 at 12:42 PM · And Damehood would be very much deserved! As an adult learner I have been doing the intermediate violin virtual sessions and can see the amount of hard work that has gone into this project. What a fabulous training resource it has become for all levels of string players and everyone is so positive and upbeat too! Just love it.