May 11, 2020, 1:59 PM · Since March, luthier Jacob Brillhart, 27, of Chelsea, Vermont has been building a brand-new fiddle to raise money to help musicians who've lost income due to the virus, and he's been live-streaming the process on this Facebook page. 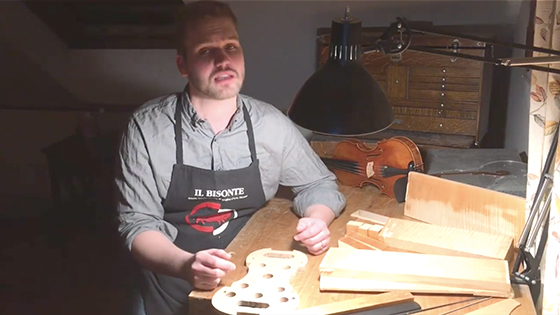 The violin (valued at $10,000 and patterned after a Guarneri del Gesù) is being raffled off -- along an entire outfit that includes a bow (valued at $5,000) made by Eben Bodach-Turner of East Montpelier Vermont and Evan Orman of Denver, Co. (geez it sounds nice); a case, some Baker rosin, etc. You have until Friday to buy raffle tickets on this fundraiser page -- they will be drawing the winner on Saturday.

Jazz violinist Jason Anick, who owns and play on a violin by Brillhart, said that "the charity is in the final week, and so far we have raised $55,000! We have been able to hand out $250 aid packets to a number of struggling musicians so far, but we have so many more applicants, that we raised our goal to $80,000 for this final push."

On Monday, Jason traveled to Vermont to play the violin and bow for the very first time ever! Below is a video of that first demo, with Jason playing "Tears."

Here also is the link to apply for aid, for musicians who have lost income due to the virus.

BELOW: Luthier Jacob Brillhart and bow maker Eben Bodach-Turner explain the fundraiser, which is happening in conjunction with Seven Stars Art Center in Sharon, Vt. At Violinist Jason Anick demonstrates his own Brillhart violin with some jazz at the end of the video.

May 11, 2020 at 11:14 PM · Thanks so much for covering this project putting food on the table and rent checks in the mail for musicians hit hardest by the pandemic!