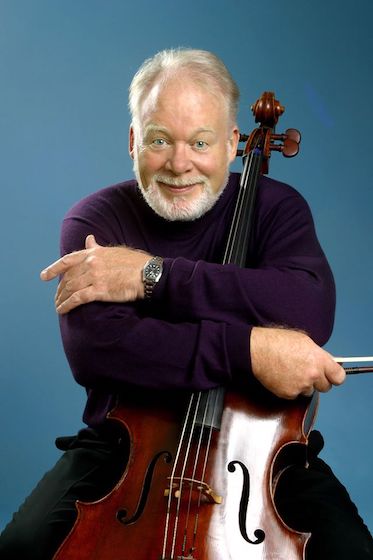 "We have lost a wonderful father, husband , mensch," his wife Helen Nightengale wrote on Facebook Tuesday. "All four of Lynn's children, his sister, friends and I mourn him along with those who were lucky enough to know his music, his wit and his humanity. You were an end of an era, Dear Lynn, and will be missed more than you will ever know. We love you to the moon and back. Rest in Peace, dear one, you have earned it."

Harrell spent a lifetime performing as recitalist, chamber musician, and soloist with orchestras - as well as recording, teaching and doing other creative projects.

Born in New York city to musical parents (baritone Mack Harrell and violinist Marjorie McAlister Fulton). Harrell was nine when he started playing cello, and he was 12 when his family moved to Dallas, where he continued his cello studies with Lev Aronson, principal cellist of the Dallas Symphony Orchestra. He went on to study with Leonard Rose at The Juilliard School and Orlando Cole at the Curtis Institute.

Harrell's teenage years were tumultuous - his father died when he was 16, then his mother died two years later. At age 18 he won a position in
the cello section of the Cleveland Orchestra, under George Szell. From 1964 to 1971 he served as Cleveland's principal cellist.

As a teacher, Harrell taught at prestigious institutions, including the Cincinnati College-Conservatory, The Juilliard School, the University of Southern California, the Los Angeles Philharmonic Institute, the Royal Academy of Music in London and, until his 2009 retirement, at Rice University’s Shepherd School of Music in Houston.

As important as his litany of achievements is Harrell's legacy as an uplifting presence in the classical music world.

"It's terrible to think that Lynn has gone: the epitome of high-spirited, larger-than-life, twinkly-eyed boyishness, always so enthusiastic and celebratory - and the best colleague one could ever hope to have," wrote cellist Stephen Isserlis on his Facebook page. "I knew about him and admired him as a teenager; but only got to know him later, and found him to be a wonderful friend, supportive, warm-hearted and open, with a lovely sense of humour, all of which qualities carried over lavishly into his music-making. Farewell, Lynn - you will be so much missed. Glorious cellist, glorious human being."

Harrell's sense of humor went on full display in 2013, when he appeared on a hilarious segment on the Stephen Colbert Report, in which he described being kicked out of Delta's Skymiles program for trying to obtain frequent flyer miles for his lifelong partner, Cello Harrell.

Harrell won two Grammy Awards and made more than two dozen other recordings. Harrell also played the lead role in the 2017 short film Cello, directed by Angie Su, which illustrates one man's battle with ALS.

April 29, 2020 at 02:39 PM · I'm just guessing that any cellist who gets invited to perform in a trio with Anne-Sophie Mutter and Yuri Bashmet was quite the musician. The linked Rach sonata YouTube is gorgeous. Sounds like he was quite the man all around.

April 29, 2020 at 08:58 PM · Lynn touched so many of us, and we’re all feeling a huge loss. He exuded warmth and sincerity. He went to the same high school I attended in Dallas, and I was amused when the NPR obituary said he attended “some high school” in Texas. (It was Hillcrest) My favorite of his chamber music recordings was the Taneyev Piano Quintet with Pletnyev, Repin, Gringolts, and Imai. Within that powerhouse of musicians there was an elegant, combustible, unified interpretation. And every time Lynn played, it felt so right and it tore your heart out. Fortunately it’s on YouTube.

April 29, 2020 at 10:54 PM · Mr. Harrell performed the Elgar with my father's orchestra in Colorado back in 1975. I was in the second violin section at the time, aged 19. Mr. Harrell would have been about age 31 at the time. My father and I reminisced today about this performance. Here was an artist of such great technical prowess, yet one of the kindest, most gracious people we have ever met. Laurie, you summed it up beautifully when you wrote: "As important as his litany of achievements is Harrell's legacy as an uplifting presence in the classical music world." Perfect! And what a moving clip you chose in tribute. Absolutely beautiful!

April 30, 2020 at 06:19 AM · Lynn Harrell soloed with orchestras I was in on several occasions. In addition to his superb artistry, he was unfailingly kind and uplifting to work with. His death is a great loss to the music world as well as to his family.

April 30, 2020 at 06:58 AM · I met him once at a conductor's house where I was working as a score marker ca. 1980. He could not have been nicer or more gracious. I had heard him several times as a soloist and as a recitalist, and I was so touched that such an amazing musician just seemed like a normal guy. Condolences to his family.