April 24, 2020, 12:26 PM · Welcome to "For the Record," Violinist.com's weekly roundup of new releases of recordings by violinists, violists, cellists and other classical musicians. We hope it helps you keep track of your favorite artists, as well as find some new ones to add to your listening! 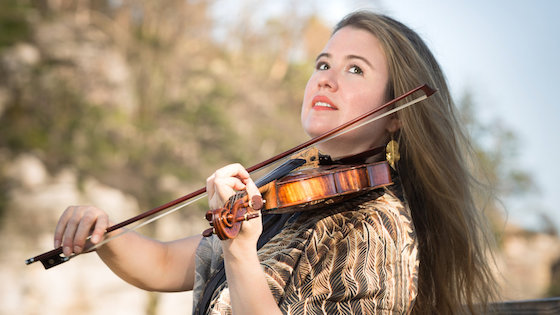 The album pairs Beethoven’s Violin Sonata No. 9, “Kreutzer,” in A Major with César Franck’s Sonata in A major for Violin and Piano, and also includes Fritz Kreisler’s Schön Rosmarin. "I had been waiting for a pianist who would be able to keep up with the extremes I envisioned for (Beethoven's 'Kreutzer' sonata), tempo and volume-wise," Lara sid. "Obviously, old Ludwig wanted the pianist to improvise, which is what Matt does in the piano cadenzas." Beethoven’s “Kreutzer” Sonata, which debuted in 1803, was written during a period of his tumultuous success and the tragedy of his impending deafness. The sonata is named after Rodolphe Kreutzer, whom Beethoven offered the piece to. Franck’s sonata was composed in 1886 as a wedding gift for Eugène Ysaÿe and his wife, Louise Bourdeau. BELOW: last movement of Beethoven's "Kreutzer" sonata:

English violinist Thomas Bowes follows hisrecording of all of J. S. Bach’s Sonatas and Partitas for solo violin with this complete set of the Six Sonatas by Belgian violinist Eugène Ysaÿe (1858-1931). Ysaÿe, a man of immense generosity and largeness of spirit, was known not only for precision but also for a deeply affecting power of communication. The sonatas were written late in life, when Ysaÿe was plagued by illness and doubt, finding himself increasingly cut off from playing the violin. Sketched out in a 24-hour period, the sonatas are complex and difficult for the player. BELOW: Thomas Bowes performs an excerpt from Ysaÿe's Sonata No. 6:

Cantilena brings together two virtuoso soloists, violist Tabea Zimmerman and pianist Javier Perianes for an exploration of repertoire from Spain to South America featuring works by the greatest composers the countries of these regions have produced. Spanish folk songs arranged by Falla are paired here with compositions by Casals, Granados, Montsalvatge, Piazzolla and the beloved aria from the fifth Bachiana brasileira by Brazil’s Villa-Lobos. BELOW: Both artists talk about their collaboration, with excerpts from the album.

The Sirius Quartet performs "And the Snow Did Lie" by Hilary Tann, a Welsh-born composer living in the foothills of the Adirondack Mountains. He was inspired to write this commissioned work by a series of lithographs from the classic French-Canadian novel, Le Survenant. The piece's three movements each depict a season in the bleak northern landscape. The first movement evokes the wasteland of late autumn with an murmuring drone pierced by the shrill voice of decay. The second movement imagines the gentle snowfall of winter. The final movement conjures up the floods of springtime with shivering tremolos, lyrical lines, and echoes of the previous textures. BELOW: And the Snow Did Lie:

Take a listen too to his amazing piece for upper strings 'Exil'.

It's the bonus track on digital platforms.