That is why on Friday he featured the music of Hindemith, as well as a tribute to composer Krysztof Penderecki - in his Facebook Live performance from his home in New York City, which you can watch right here:

The concert includes his performance of Hindemith's five-movement Sonata for Viola Solo, Op. 25, No. 1, as well Penderecki's Sarabande for Viola Solo.

A native of Asturias, Spain, Rodolfo lives in New York City and has performed with orchestras around the world. In addition to his recordings of works by Hindemith, later this year Rodolfo will release a recording of selections from Prokofiev’s Ballet Romeo and Juliet, with pianist Min Young Kang.

Earlier this week I talked with Rodolfo about Hindemith and about meeting Penderecki in person. We also talked about his choice of viola over violin and his stunning new viola by Diego del Valle -- and about how social media can keep us together during this time of isolation. 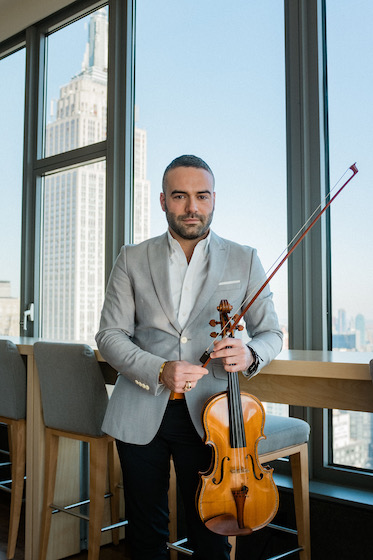 Laurie: You've made two recordings of Hindemith's works, one of the Solo Sonatas and one of the Sonatas for Viola and Piano. What attracts you to the works of Paul Hindemith?

Jesus: My relationship with Paul Hindemith began when I was finishing my bachelor's of music degree in Spain, with the Sonata Op. 25, No. 1, the same piece I will be playing on Facebook Live. As an anecdote, Paul Hindemith wrote the first and last movements of that piece in the dining car of a train, traveling from Cologne to Frankfurt, and he performed the entire piece that same night, including those two movements!

Back in my undergraduate days, I was truly intrigued by Hindemith's very powerful language -- and shocked by all the accidentals! So many sharps and flats all over the score! Then this relationship deepened when I moved to the United States to study with Jesse Levine at Yale University. He was a big fan of Paul Hindemith, and he suggested that I learn his other works for viola. Plus, Hindemith taught at Yale!

I still remember my English proficiency exam that summer, which actually took place in Hindemith’s classroom. It was much later, when I started recording his viola "cycle," that I was able to fully grasp the sublime beauty of his compositions, behind the density and thickness of his harmonies. There is a crystal-clear reminiscence to J.S. Bach, the use of Baroque compositional forms such as the passacaglia, theme and variations, fugues, chorals, etc., which mesmerized me when I was preparing the solo viola sonatas for my third recording. The structure and pristine treatment of harmony and counterpoint in his compositions is almost divine. Unveiling that almost hidden beauty has been one of my purposes in recording his sonatas for viola and piano and for viola solo.

Laurie: Besides the Hindemith, you are also playing Penderecki's Sarabande for Viola Solo. What are your thoughts about Penderecki and his music?

Jesus: Just a few days ago, on March 29th, we had the news about the death of the fantastic Polish composer, Krysztof Penderecki. With all that has been happening the last few weeks, this felt again like more bad news, and it saddened me greatly. Penderecki’s music for viola has accompanied me for almost half of my Life. Penderecki himself was the honorary artist of Auditorio Principe Felipe in my hometown Oviedo, and I saw him conducting his music with the Orquesta Sinfonica del Principado de Asturias, in Oviedo many times. Also, my teacher in Spain, Wieslaw Rekucki, with whom I began my viola studies, is Polish as well, and introduced me to Penderecki and his music.

I had the fortune to meet this great composer only once, and at that time I played for him his Cadenza for Viola Solo. His Sarabande for Viola Solo was originally for cello, but he transcribed it (like many of his other works) for viola solo for Yuri Bashmet. The piece is in Memoriam of Bach, and it just so happens that Bach’s birthday was March 31st. The Sarabande has a clear influence from Bach, and in my opinion all of Penderecki’s music has a strong influence in structure and counterpoint from the Baroque composer and delivers a haunting and very deep feeling of mourning. I thought it would be something very special to actually remember both composers and play both works together.

Laurie: Like many fellow musicians, you have taken to social media to provide music while we all are isolated at home. You were doing this prior to COVID-19; do you feel it is more important now?

Jesus: I firmly believe that music is a form of art that builds invisible bridges and brings cultures from all over the world together. In other words, I would say that music is an international language that is capable of conveying messages we might not understand but that we feel, and which can bring the entire world together. For me, social media is a wonderful way to convey that message, and a window to open on art, as well as the instrument I play and love, the viola, to the entire world.

Thanks to technology, nowadays we are fortunate to be connected with the world at "one-click-distance." That empowers us in many ways. Among them: we have the unlimited ability to be in touch 24/7 and share our lives with the world. COVID-19 is one of the biggest challenges the world has ever faced, and we still don’t know how this will develop. Many different fields, the arts among them, have been severely affected across the globe. However, thanks to social media, there are musicians, artists, designers, and so on, broadcasting their work and connecting with people around the world, live. In a way, this enables humanity to keep looking forward and to keep having hope that this pandemic will be handled and controlled soon, so that we can get back to our lives as they were and be able to exist normally.

Laurie:: As a a violinist, I have to ask you, what made you decide to play the viola and not the violin?

Jesus: My first instrument was actually the piano, and I still play it whenever I get a chance; I absolutely love it. When I was six years old, my teacher told me I had perfect pitch and that I should play the violin. I had no idea what that was, but I started playing the violin. But soon after that, even at that young age, I realized that although I loved the violin repertoire, the sound was too "squeaky" and the instrument was annoying for me to play because it was too small. I couldn’t get the sound that I wanted and had in my head. And so I was introduced to the viola.

My teacher played a little bit of Schumann's Marchenbilder "Nicht Schnell" and the first movement of Walton’s Concerto -- and I absolutely fell in love. The sound had more body -- it was deeper, more somber, lyrical, and bel canto-like. To me, the instrument was really comfortable to play. I absolutely loved it right away. I slowly discovered the repertoire, which really fascinated me from the very beginning; it felt like the perfect fit. I still play violin rep with the viola, because of course, I love the violin repertoire. But I feel that the viola better portrays my own voice and message, and to me that is very important.
Laurie: Tell me about the viola that you play.

Jesus: I just recently acquired a new viola, and I am so in love with it. 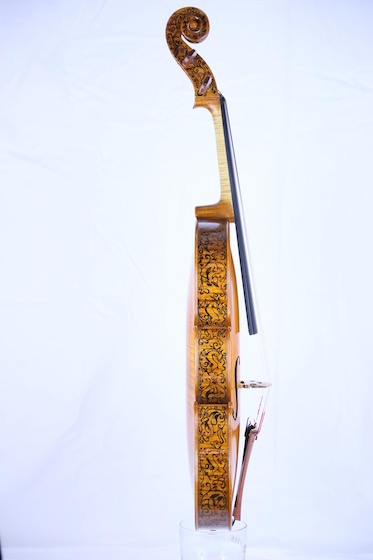 Viola by Diego del Valle, from the side.

It was made by the fantastic Spanish luthier Diego del Valle in 2019, after Stradivari's 1696 "Spanish Court" viola from the Royal Palace in Madrid. The original has always been my favorite instrument. I have had this new instrument for less than a year, and I am still learning about the instrument itself. It already has the beautiful, dark chocolate tone that I was looking for, bleak and somber. Yet it still has a beautiful, bel-canto coloratura-like upper register that I really need in a viola, to be able to play brightly over an orchestra, or to come through strongly in some of the solo repertoire for the instrument. I love the velvet quality of the tone, as well as the sparkle it has when I play fast. It’s a really beautiful instrument aesthetically also, with amber varnish that gives it orange and gold tones - colors I love. It also has stunning biomorphic ornaments on the sides and the head.