Interview: Violinist Johnny Gandelsman on Bach and on FB Live

March 29, 2020, 9:18 PM · Violinist and producer Johnny Gandelsman performed Bach’s Complete Cello Suites on the violin, in a free Facebook Live event from his East Coast home Tuesday. We had talked to him about his Bach project, in anticipation of his performance in Los Angeles' Wallis Annenberg Center, a performance which has been delayed indefinitely due to the coronavirus pandemic. I hope to see him play Bach live when it's possible again, but for now, please find his Facebook Live concert in three videos; click here for the first part; click here for the second part; and click here for the third part.

And please open another window and enjoy our interview with him as you listen! 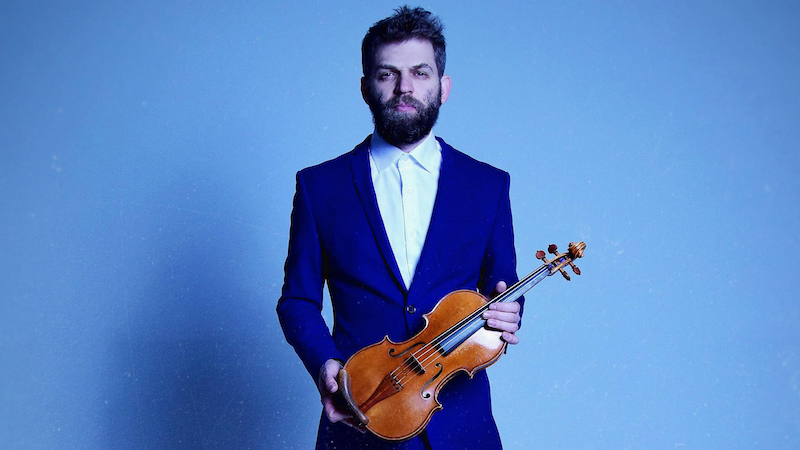 Violinist Johnny Gandelsman has been searching for answers in the works of J.S. Bach ever since he was in his early teens.

"I was probably 12 or 13 when I started working on my first solo Bach, which if I remember correctly was the D minor Partita. I remember that even back then, the thing I was trying to understand and figure out was the feel of the music," Gandelsman told me in an interview earlier this month. "At the time, I was a student of the Russian violin school, so I was using vibrato, lots of bow, and the expression of the music was focused on lyricism. Somehow that way of interpreting this music did not sit right with me, and I've been searching for answers ever since."

Gandelsman has spent a lot of time exploring genres besides classical music, with his quartet, Brooklyn Rider, and his time spent touring with Yo-Yo Ma's Silkroad Ensemble.

"Having had about 20 years of working with master musicians outside of the classical music tradition, I'm more drawn to direct and very honest expression from the folk tradition, -- very little, if any vibrato, small amounts of bow, but a lot of variation in articulation, staying rooted in the feel of the dance," Gandelsman said. "Who knows what will happen in another 20 years."

In February Gandelsman released his Kickstarter-funded recording of the Complete Cello Suites, transcribed for violin, which was a follow-up to his 2018 recording o Complete Sonatas and Partitas for Solo Violin. He has also performed both Bach cycles live, and on March 21, he will perform all the Cello Suites on violin, at the Wallis Annenberg Center for the Performing Arts in Beverly Hills.

Born in Moscow, Gandelsman was raised in Russia and Israel, moving to the United States in the '90s to study at the Curtis Institute. He is from a musical family -- his father Yuri is a professor of Viola at Michigan State University, his mother Janna is a pianist, and his sister Natasha is also a violinist. He now lives in Brooklyn.

What made him want to dive back into Bach at this stage?

"I wanted to spend some time on a solo project, and what could be better than to spend a few years learning and re-learning the Sonatas and Partitas?" Gandelsman said. "It's a full dive into a whole world. One can observe how Bach the inventor and the scientist keeps experimenting, keeps expanding the technical and musical demands of a single instrument, from one piece in the set to the next. It's fascinating."

"Coming back to these works is like re-reading a great book - I notice things I haven't before, I make different voice-leading choices, I find new meaning in the musical phrases," he said. "I'm very curious to come back to the Sonatas and Partitas after having spent time with the Cello Suites, and see if and how my understanding of the Sonatas and Partitas might shift yet again.

While sometimes violinists play a few movements transcribed from Bach's Cello Suites as students (after all there are several in the Suzuki books), this was not the case for Gandelsman.

"My first movement was the Prelude from the first suite, about 18 months ago," he said. And since these are written for cello, how did he manage to play them on the violin?

"I found an edition on IMSLP, but I tried to learn the music by ear, so I didn't spend much time looking at that edition," Gandelsman said. "That edition had the first five suites transposed a fifth up, with the sixth suite staying in key. The sixth suite was written for a five-string instrument. When I was just starting to think about learning the suites, I knew that I wanted to do the sixth on a five-string violin, an instrument that is not very common in the classical world, yet is very popular in the folk music world."

"I did look at the cello editions," he said, "and I've loved exploring the great Dutch cellist Anner Bylsma's books on the suites." (You can find Bylsma's books here; some are available as free downloads.)

And what about historically-informed performance practices? Did he use any "baroqued" equipment or concepts?

In terms of equipment, "the violins I use are both babies," Gandeslman said. "My regular violin is a 2008 Sam Zygmuntowicz. The five-string is a Snow violin from 2018. I have a transitional-style bow which I really enjoy, and I also use Passione strings."

"In terms of style, it's clear that the music of Bach can be - and is - played with many different approaches," he said. "Personally I'm drawn to the really fabulous Baroque ones - Shunske Sato and Paolo Pandolfo are current favorites."

Both the Sonatas and Partitas and the Cello Suites are epic works, each containing six multi-movement sonatas (or partitas or suites). A live performance of either set is both a marathon and a rare occasion. Gandelsman is one of the few musicians who has performed both sets live. Which is more difficult?

"That's a hard question to answer," Gandelsman said. "The violin pieces are technically demanding, and within the set, the fugues are probably the most difficult, or present the most problems one needs to solve, like the explicit three- and sometimes four-part polyphony. The Cello Suites feel different. The polyphony is implied and often embedded within a single line. Most recently I've been thinking of each suite as a medley of dances, so I've been searching for ways to transition from movement to movement somewhat seamlessly, the way an Irish fiddler may transition from tune to tune. Since I've started performing all of them in concert, I'm very much in learning mode. I should be able to reflect in a few years!"

"In terms of time, I've done both sets without intermission, and they take about two hours, depending on how much talking I do in between," he said. "I will say that from a purely physical standpoint, so far performing the complete Cello Suites has been kinder to my body than doing all the Sonatas and Partitas.

And what if a violinist would like to learn the Cello Suites?

"Get the music and jump into it!" Gandelsman said. "The one specific thing I could suggest is to embrace the music the way it sounds and feels on the violin - lighter, sometimes faster - and not to try and imitate what it sounds like on the cello."

BELOW: Gandelsman performs Bach's Cello Suite No. 1 on violin, live at Boston Conservatory in 2019:

March 30, 2020 at 02:21 PM · Wonderful news! I bought the CD of Mr. Gandelsman playing the Bach cello suites and it's spectacular. I can't wait to hear him again in a live performance!

Gandelsman's Suite no 6 is more "authentic" as it is played on a five string instrument. Podger's is electronified and it turns out to be creepy. If you can afford them get both.